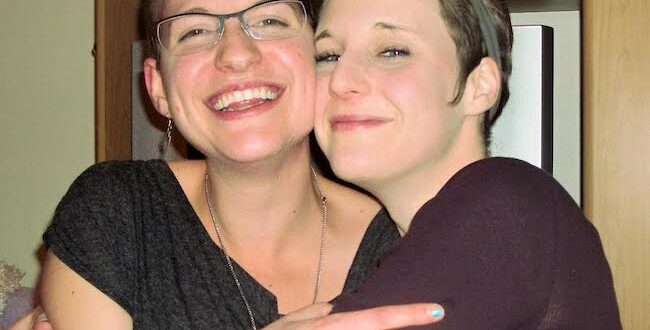 Alissa and her wife Caitlin Glessner in 2016/Contributed

It was the summer of 2006. Alissa and I were driving from Spokane to Sandpoint for a daylong getaway.

My daughter was about to become a high school junior and was living in Colorado Springs with her mother. My summer-time visits with her were important for both of us.

The convertible top was down as we drove north on Highway 95. The wind noise made casual conversation difficult, so I did not quite hear her when she first said, without preamble, “Dad, I think I’m gay.”

I asked her to say it again.

I am no more intuitive than the next parent. Busy with my career, divorced from her mother, it is entirely possible I could have missed or misread the clues. But in my bones, I suspected Alissa was gay long before she came out to me.

It was the little things. Her taste in clothing, more pants than skirts, not typical of the little girls in her classes. Her disinclination to play with Barbies that mostly stayed on the shelf while she played with plastic horses and my son’s “Aliens” action figures. A circle of friends drawn from a variety of marginalized groups in a community where a fundamentalist religious culture could make life difficult for those outside the mainstream. Mixed-gender group dates to touchstone events, such as the school prom, which she attended with a mixed group that started the evening not at a fancy restaurant, but at Borders reading manga comics. Her affinity for Capt. James Kirk rather than Capt. Kathryn Janeway. Her sudden interest in field hockey, and this from a girl who never showed much interest in sweating. (But it was the gayest of high school sports, she says now.)

Parents of adolescents know better, or should know better, than to read too much into the little things, especially teen confusion and angst. But it always seemed to me Alissa was working through some hard issues.

She was (and is) a wonderful daughter – creative, thoughtful, kind and generous. She spared my ex and I much of the pain teenage daughters can inflict on parents. She was a good student, but not great. Introverted, it seemed to me, maybe a bit isolated at times. Sometimes a bit dark.

And then, on that summer drive, she came out, at least to me.

Going back to school the following fall, Alissa was a different person in so many ways. No longer so much an introvert, she formed her high school’s first Gay/Straight Alliance club and then managed to gain school approval in a district dominated by fundamentalist organizations such as Focus on the Family. Her grades improved and she found support from faculty allies who must have marveled at the change. She seemed more outgoing to me and her odd sense of humor blossomed. And finally, she could talk to me about her gay friends, particularly a girl nicknamed “Cheeto,” her first teenage love.

By the time she graduated high school, she had earned a leadership scholarship – think about that for a moment – that helped her attend the University of Montana.

No wonder when it comes to my daughter, I have a father’s deep and abiding pride.

June is Gay Pride Month, a time set aside to consider progress made in LGBTQ rights and to confront the many challenges ahead. A time to recognize and honor the fundamental importance of self-knowledge and self-actualization.

And that is the point of this extended family anecdote. Alissa did not change when she came out. She merely cast off a false front to become the person she was meant to be. Once she became her full and true self, there was no holding back.

In 2011, I was able to walk in my first Spokane pride parade. Alissa walked with me. The next year, I was honored to drive that year’s grand marshal, former Air Force Maj. Margaret Witt, one of our closest friends.

Until the pandemic made the Spokane pride parade a two-year virtual event, I was there most Junes, honoring my daughter and then her wife, Caitlin, that high school sweetheart named Cheeto. They celebrated their fifth wedding anniversary earlier this month.

During that same period, 2010 and 2011, my wife, Carla, served as executive director of Odyssey, a center for eastern Washington’s at-risk LGBTQ youth. Through her, I got to spend time with so many youngsters, some of whom reminded me of Alissa, others whose lives had been filled with pain and exclusion, too often rejected by their own families. For the first time, I came to know and understand, just a little, trans youth who face challenges most of us cannot imagine and who suffer suicide rates far beyond the national norm.

Through that experience, I came to understand a fundamental consequence of discrimination –  the denial of equal rights to any marginalized group. Becoming her true self unlocked so much potential in my daughter. How much potential is lost to our society when we deny any people, any group, the right to live lives free of the discrimination that limits potential?

Having close friends who are gay and teaching 10 years in the college bubble where young people seem much more tolerant, it would be easy to think we have turned the corner on gay and trans rights. Much needed focus on issues facing other marginalized groups also has served to push gay rights off the front burner, at least for now.

But that is so wrong. Make no mistake, there are powerful forces in our society that want to turn back the clock to a time when being gay forced a person into that proverbial closet, suffocating potential. Some of those forces are religious. Some are political. Some are sincere, though I sincerely believe they are wrong. Others are opportunistic.

It was the stated and active policy of the Trump administration to retreat from legal protections afforded LGBTQ people in the workplace and in the courts. One of the rationales behind his Supreme Court-packing initiative was to establish a conservative majority that would go so far as to end legalized same-sex marriage. At the same time, the former president and his allies launched an all-out attack on trans people, often arguing there is no such thing as trans.

Tens of millions of Trump supporters were energized by the former president’s efforts. In recent months, my social media feed has seen more and more anti-gay posts and memes. A one-time high school friend is now part of a self-proclaimed feminist movement that argues the fight for trans rights is simply the patriarchy attempting to limit the role of women, or worse, eliminate women altogether.

As we have seen with the political assault on Black rights, on Asian and Pacific Islander rights, on Muslim rights, on Latinx rights, the fight to end discrimination is never really won. Progress on one front is always followed by retreat on another. Progressives should keep that in mind as Trump Republicans fight to regain control of government that would open the door to new assaults on equal rights.

Yes, June is Pride Month. Because of the pandemic, there will be no actual parade this month, though organizers say an October event is possible. It does not matter when. In a virtual sense, at least, I will still be there with my daughter.

Leaving college, Alissa worked a few typical post-grad jobs, then became a journalist and editor. Earlier this year, she became communications director for a Colorado Springs nonprofit that supports LGBTQ youth. She is an outspoken community leader, always advocating equal rights for all.

June is Gay Pride Month. It is a good time to remind myself and any others who care to listen that I am so, so proud of my gay daughter.

Will you show your support for SpokaneFāVS by becoming a sustaining member today?

Previous Can Shared Understanding Lead to a Better World?
Next Ask A Muslim: Conversion and Changing Names