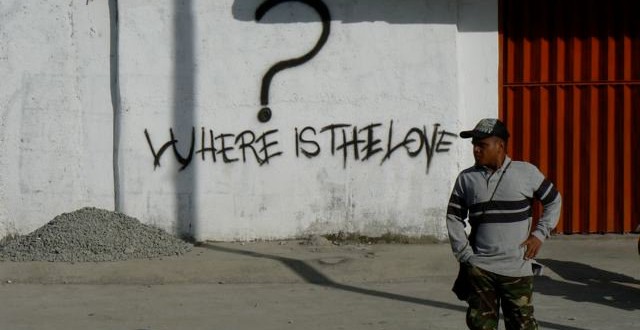 A Fable About Church and Love

I was burdened and filled with questions of love. I went to Wall Street to ask the men of money my questions. They said the only real thing is what can be bought and sold. They could buy and sell almost anything. So, I asked them about the rip in my spirit and questions of love. They looked back blankly, then their expressions turned to anger. They called security and I was thrown out into the street.

I then passed The Golden Bull Calf at the entrance of the Wall Street and saw many successful pastors dancing around it. These pastors built shiny auditoriums with thousands of people coming weekly to find the answers to their questions. They must have the answer to the question burdening my soul. I paused and asked them the questions that pierce my side with pain.

They said just buy their DVD, books and listen to their messages. After spending money, I found they said if I behaved I would get to heaven. They added I should continue to buy their next books and DVDs. It left me empty, as I found no love and the questions continued. I entered into their shiny auditoriums and saw no cross. They had done marketing studies by the Wall Street people and found that the cross was an embarrassment. They removed it so as not to offend the buyer. I again went to the pastors and shared how their message left me still empty. I was thirsty for living water and the food they offered lightened my wallet, but didn’t fill me. They said they had no time for me as they had to plan their next seminar on the right tools to build a life of success. They planned an Internet extravaganza. I left their shiny auditoriums for they lack the cross.

Next, I went to the undertakers. They were happy and told me to enjoy life before it ended. I shared my adventures with Wall Street and the pastors. They laughed as they said a polished marble coffin never stopped the bones from to turn to dust. It looked nice, but no one cared after a while. Then I asked my questions of love. They said they knew nothing about that, but why didn’t I ask the fellow with me. Curious, I asked which fellow they meant and they pointed to the one next to me. I turn around and found him, who they were talking about. He introduced me to his father and his friend who knew the questions of love for they were love. I asked about the ripped hole in my life and he shared the one that came from the spear of a man of violence. Suddenly, I saw the poor that need living water and not lectures. I saw the weak that needed love. I learn from the three the nature of love. The undertakers laughed and said they would see later. I too laughed for their wires had no sting left.

Previous The truest GOP believers? Mormons
Next Ask a Mormon: What are your Sunday worship services like?