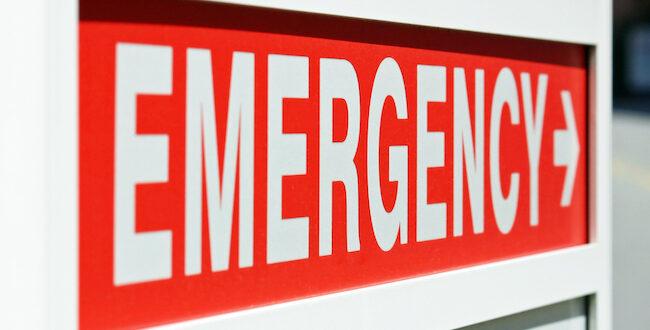 A red Emergency sign at the entrance to a hospital/DepositPhoto

It was not how I planned to spend my Saturday.

The discomfort began the previous evening. I tried to dismiss it. Did not tell my wife.

On Saturday morning, I was making breakfast for Carla and a close friend when the discomfort became something more. Blood pressure and pulse rate spiked. I became shaky and dizzy and broke out in a cold sweat.

As soon as breakfast was over, and our guest had left, I told Carla I needed to go to the emergency room. There is an urgent care facility not far from us. But I was told long ago if a man my age walks through the door with chest pains they call an ambulance. It was easier to have Carla drive.

Within a few minutes I was walking into the Sacred Heart Hospital ER. And it was a madhouse. Noon on a Saturday, in the middle of a pandemic, and at any given time there must have been a hundred or more people seeking help.

But old men with heart issues are given priority. I was checked in, given an ID bracelet, dropped into a wheelchair, and told to wait. It was not long. Within a few minutes, I had my vitals taken, was given an EKG and then a chest x-ray.

The nurse who gave the EKG said I was experiencing atrial fibrillation, an erratic heartbeat. I asked her if coming to the ER was justified. “Yes,” she said. “You need to be here.”

The vitals taken, I was sent back to one of the four waiting areas, told I would be seen by a doctor as soon as a bed was available.

That was good news. Obviously, I was not dying.

In the end I waited from noon to 7 p.m. – in that wheelchair, not allowed to eat or drink – before I was able to see a doctor. In those long hours, I was able to observe what seemed to be the full range of ER activity.

I have been in more stylish, modern-looking ERs with family members or close friends. The Sacred Heart check in and waiting areas are a bit worn. But the organization and efficiency were amazing to watch. And the actual examination rooms are as clean and modern as any I have seen.

As patients checked in, they were sent to one of four waiting areas. At first it all seemed so random. But there was a system. There was a separate area for children who require emergency attention. There was an outside lobby where it seemed less critical cases were sent pending the opening in late afternoon of an adjacent urgent care. My waiting area was right next to the check-in station. A nurse told me I was one of five patients waiting for an examination room.

And there was a separate area, divided from the rest by a wall and plexiglass screens that appeared to be reserved primarily for COVID patients. That room had a TV tuned to the day’s NFL wild-card games. Except for the COVID thing, I was jealous.

In truth, there never really was much separation as people came and went and took a seat wherever they could find one. There was noise – random screaming, crying babies and incoherent ramblings. The human traffic was non-stop.

A large percentage of patients clearly use the ER for primary medical care. Sacred Heart takes all patients regardless of ability to pay so the number of poor, even homeless, was stunning, if not surprising. And so many people came alone to the ER that day. Carla was with me the entire time, refused to leave even for dinner. I cannot imagine sitting there alone without any support. I think the pervasive loneliness was the saddest thing I saw.

There were a couple of cases that quickly caught my attention.

A young woman sitting next to us was clearly having some sort of mental breakdown. She clutched her legs to her chest, kept mumbling to herself, crying, and hyperventilating. Wherever she was supposed to go apparently was full, so she was kept waiting, was still there when we left.

Meanwhile, a young man who came in with his mother and told the check-in clerk he no longer wanted to live “on this planet” was quicky taken to a triage room where he was joined by a nurse and security guard. Within moments he was taken away for what appeared to be closer attention. At first, it seemed to me he might have been trying to make a joke when he answered the clerk’s routine question about suicidal thoughts. Carla, who works for the local mental health agency, said there are no jokes when it comes to suicide. The ER staff took him seriously.

One man, wearing a Denver Broncos sweatshirt, came in with his mother, checking in just after me. She was an alcoholic, he said, and he had been struggling to care for her. He was scared. But after checking in, she repeatedly wandered around the waiting areas, talking to herself, or shouting incoherently, pulling off her face mask, and sending her son on a desperate chase to corral her again. Over and over. She was still in the waiting area, still wandering, when we left hours later.

It was like that all day. Noisy. Chaotic. But amazingly efficient.

I asked one of my nurses how the workload was affected by COVID. She shrugged as if to say “look around.” She did admit to being exhausted, overworked, and stressed. The hospital was short-staffed, she said. Colleagues have retired or simply quit.

But you would not know any of that while watching events unfold in the ER.

About 7 p.m. I was taken back to an examination room. My atrial fibrillation had calmed, but the attending nurse and doctor gave me a complete work-up. Ambulance traffic was heavy and those coming in by ambulance appeared to be given immediate attention. At one point, my doctor was called out for what my nurse described as a high priority trauma. She said those cases are the worst of the worst.

But a few minutes later my doctor returned, calm and collected. I learned later the high priority case was a motor vehicle accident from Spokane Valley. The patient had died right there in the ER. I never would have known that from my doctor’s demeanor. He treated me as the most important patient he would see that night.

Within an hour of seeing the doctor, I was discharged with some powerful new meds and a referral to a local cardiologist. At this writing, I feel much better though the battery of upcoming tests is daunting.

Health care in this country is a mess, an unconscionable mess. So much of what I saw could have been more effectively managed under any of the proposed universal health plans. There is no excuse.

Having said that, a day in the ER shows that dedicated health professionals, at the same time they are coping with an unprecedented pandemic, somehow make it work.

There is so much to criticize. But not the Sacred Heart ER which seems to me to be one of the true miracles of modern medical science.