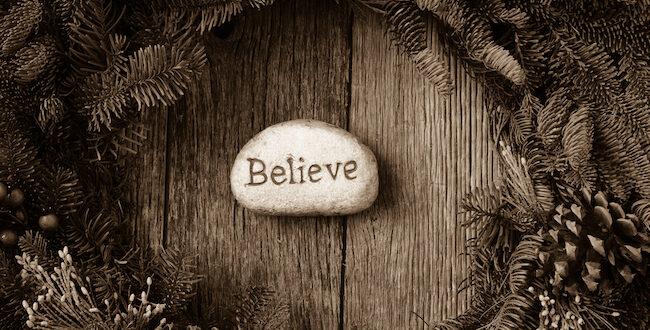 Believe in Text in the center of a Christmas Wreath/DepositPhoto

On a recent BBC news program on commercial hopes for a successful Christmas season, I noticed that the British department store-chain Mark and Spencer was also calling on its customers to “Believe.” In the background one could see decorations for a Victorian Christmas, a tribute to Charles Dickens’ 1843 “A Christmas Carol.” Dickens has even been called “the man who invented Christmas.”

Checking on the Macy’s website, I see that it roots its “Believe” campaign in the oft-reprinted 1897 “Yes, Virginia, there is a Santa Clause” New York Sun editorial.

Pardon my “Bah Humbug,” but I doubt that these stores want us to “Believe” just to honor the old Spirit of Christmas. I suspect they want us to believe that what they are selling will make us and the loved ones we are shopping for happy so that we will buy more and more.

According to one my favorite books, “The American Heritage Dictionary,” “believe” and “love” share the same Indo-European root: leubh. This makes sense. We believe what and whom we love.

To believe is to love, to support, to encourage, to commit to. During the Wild Card race this October, many Mariners fans were holding up “Believe” signs, showing support for their team and hoping, I guess, that their belief in their team might lift it to post-season success. Alas, this was not to be.

I’ve also seen sports fans hold up “John 3:16” signs, sneaking some evangelizing into the stadium. John 3:16 promises “eternal life” to those who believe in God’s Son, whom God gave us because God “so loved the world.” Thus love and belief are scripturally linked.

I admit that commercial calls to “believe” make me uneasy because for me the word has had primarily a religious meaning. Is commerce now our religion, stores now our churches?

I acknowledge that Christmas as we celebrate it is a syncretic mishmash. If any group has the right to protest that their beliefs and traditions have been appropriated, it’s pagan purists. Puritans in England and America banned the celebration of Christmas, seeing it as basically pagan.

What I object to is the use of “believe” as just a sales pitch.Believe=Buy.

But some may object that religious calls to believe are also sales pitches. Believe in X and you purchase paradise; infidels be damned.  I find this horribly obnoxious, as do most Faith and Values readers, I trust.

What then do I believe? I belong to an old-time religion with creeds through which my congregation affirms its belief in God, in the life, crucifixion, and resurrection of Jesus, the resurrection of the body, and, yes, in life everlasting.

What does all this mean? I’m sure some members of the congregation have hopes for a traditional heaven where they will be reunited with loved one. I know that others think that Jesus’ resurrection was in the faith of his followers, that the resurrection of our body is to occur in our use of it in following the teachings of Jesus by serving others, and that in this way we may like Jesus participate in the everlasting life of God.

Living belief is participatory. No one expressed this better than James in his first-century C.E. letter to believers in Jesus: “faith by itself, if it has no works, is dead” (2.17). “You believe that God is one; you do well.  Even the demons believe—and shudder,” scoffs James (2.19).

I love that image of shuddering demons, but fear I may be one of them as I wander among believers in Macy’s or Target or Walmart, or place my faith in Amazon this Christmas.

Maybe I better check out the UNICEF and Heifer International catalogues.

Previous Holding On in The Letting Go in A Pandemic: Twists and Turns
Next VIDEO: Coffee Talk — The State of Religion Reporting Today