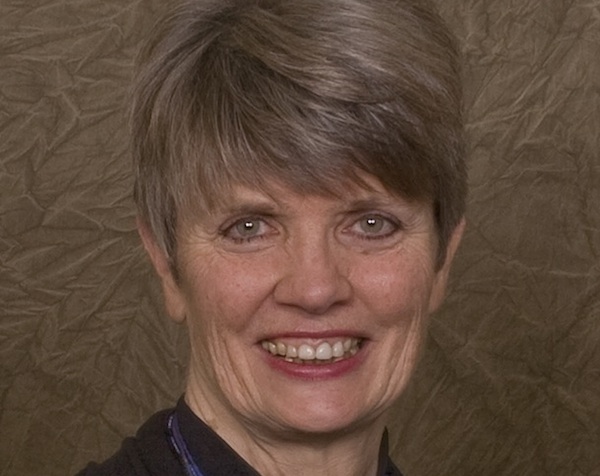 Combine a barstool philosopher, an activist shouting ‘stop plate tectonics’, and a ‘letter’ from President Bush and the end result is the going away service for the Rev. Clare Austen.

After 12 years, Austen is ending her position as pastor of Unity Spiritual Center of Spokane.

As a gift to Austen, a group of church members called the Unity Players prepared a skit titled “Bouquet of Possibilities.” The group is 10 years old and has performed a variety of skits and plays. Alan Bisson, group member, said they wanted to send Austen off with a performance.

The playful show offered up various choices for Austen to pursue after her time with Unity. The Unity Players donned costumes for each option — such as dreadlocks, tie dye, and a beanie for the hippie possibility.

Once each possibility was announced and the character came on stage, a joking ‘letter’ from President Bush was read aloud. Then the Unity Players led the congregation in singing Happy Trails. The goodbye service ended with Austen being presented with a book filled with the favorite prayers of congregation members.

“The skit was right on,” Austen said, “not only because they know me and feel comfortable having fun with me, but also because it shows their personality. It was fun for me to watch.”

“What I appreciate about Clare is she really tries to walk the walk and talk the talk and for her that means practicing love, forgiveness, inclusivety, and peacemaking,”

Sally Sledge member of the Unity Players said. “I think wherever she ends up, she will become well-known and do as much good there as she has done here.”

Jim said Austen’s leaving means that the congregation’s loss is everyone else’s gift.

Patti Zimmerman, a member of Unity Church, has known Austen for five years. Zimmerman moved from California to Spokane during a tough, cold, snowy winter.

“It was a hard transition and I became depressed,” Zimmerman said. “Knowing Clare completely helped during the transition. She got me through many transitions in my life. She introduced me to the concept of the New Thought movement. She helped me to really achieve my life goals. She is a very wonderful and inspired individual.”

Austen said while she knew it was time to leave, there is some sadness in leaving since there are people at Unity who are her closest friends.

“I am looking to give and serve in new ways,” Austen said. “I am excited for what might be next, even though I don’t know what that is yet.”