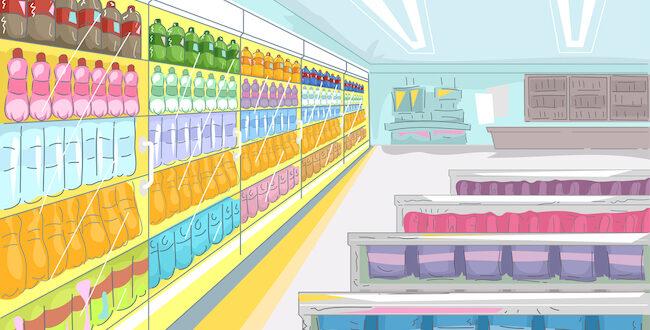 Illustration of a Convenience Store/DepositPhoto

It was a small corner market in Eugene, Oregon, in the time before Zippy Marts or 7-11s.

The owner’s name was Paul, I think, although it has been nearly 50 years so I could be wrong. I do remember he was a big man with a booming voice and huge hands. And he had been at that little market for as long as I could remember.

When I was considerably younger, my sister and I would stop by the market on the walk home from the nearby city swimming pool. The front counter was all penny candy and for a nickel or dime, a kid could stock up.

My family of seven – Mom, Dad, five kids – didn’t have a lot of money to spend in those days. Dad was a traveling salesman for a wholesale toy supplier. He traveled maybe three weeks out of every month, so Mom had been a single parent for the most part. His income was commission-based. When the toy market was hot, we scraped by. But in down times it was tough. Even as kids we knew that pancakes for dinner was a sign that business was bad.

Mom had not worked a regular job since she and Dad married, notwithstanding a failed Avon career. But by the time I reached junior high, something had to be done. She walked into that little corner market one afternoon, asked for a job, and was hired on the spot to work the register. The money was a blessing.

A few months later, she asked Paul if he might need a bit of help stocking shelves and cleaning up the back room. And that was how I got my first job. I was 13 years old, and he paid me $1 per hour, cash, under the table.

Mom had me apply for a Social Security card, but it wasn’t necessary. The big guy didn’t have much patience for government niceties. He paid Mom under the table, too.

I wasn’t the only stock boy. My co-worker, Jerry, was 16 or 17, had bright red hair, played high school football, and had a sharp looking old jalopy he treated like a prized thoroughbred. He liked me enough to pay me 50 cents every Saturday to wash and wax his car.

The stock job was hard. The little market carried the usual fast-fixing food stuffs – canned soups and chili, TV dinners, milk and cereals, ice cream, and all that penny candy. But Paul made his profit on the beer. The coolers were in the back of the store and covered two walls. As the junior stock-boy, the primary job was refilling the coolers from the back and that meant lifting case after case after case. On a Friday or Saturday night I would refill those coolers from top to bottom two or three times.

Paul was not one for small talk, not with his two stock boys or with the customers. Looking back, I suspect he kept a bottle behind the counter and would have a few drinks as the night shifts wore on. By the end of the night, especially on those weekend shifts, he would be a bit more forthcoming. He wasn’t exactly a storyteller. But I did learn that he was a World War II veteran, though he would not provide any details of his service.

I remember he didn’t care for the law, maybe because he had been in trouble himself. And he sometimes talked about the drunks or down-on-their-luck customers – the deadbeats, as he called them – that he had to rough up as he tossed them out.

But I also remember a Christmas Eve night shift when a sad-looking young couple came into the store. And while the wife toyed with the penny candy, the man shoplifted a half-dozen TV dinners. Of course, Paul spotted the theft immediately.

But there was no roughing up. Paul understood real desperation, I think. Maybe he had been there once or twice himself and he wasn’t going to pile troubles on a desperate family on Christmas Eve. The pair walked out of the store with the TV dinners, a sack full of food, and treats for their kids. Paul made it clear we were never to talk about that.

I worked in that store through my eighth-grade year and into my ninth. The money mostly went to the family, and sometimes a few pieces of penny candy.

That little store is long gone now as is Paul. A utility substation occupies the lot.

But you don’t forget your first job. And I won’t forget that little market where the beer coolers were always full, where candy cost a penny and where the big man with the big hands and the big voice helped a desperate family on Christmas Eve, showing an even bigger heart.

Previous Ask An Evangelical: The Book of Enoch
Next Public funding of religious schools is coming. The first lesson is compromise