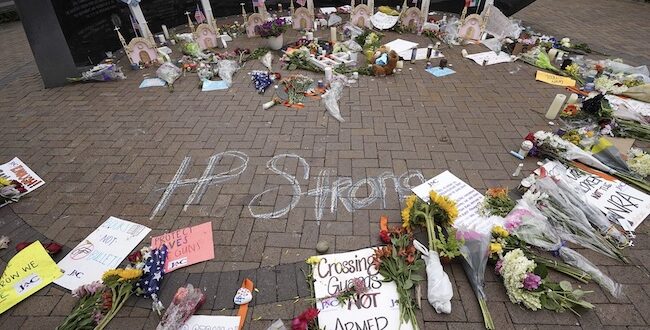 A memorial to the seven people killed and others injured in Monday’s Fourth of July mass shooting grows at a veterans memorial July 6, 2022, in Highland Park, Illinois. (AP Photo/Charles Rex Arbogast)

A Christian Approach to America’s Standoff on Gun Safety Reform 

A Christian Approach to America’s Standoff on Gun Safety Reform

On the Fourth of July, my wife and I stood on the lawn of the White House, joining a crowd of Americans from all walks of life, celebrating a day intended to symbolize freedom and independence for U.S. citizens. Across the country, similar crowds gathered for parades, fireworks displays and family cookouts on a day filled with the joy of being with family and friends.

Seven hundred miles away, in Highland Park, Illinois — on streets I walked as a divinity student at a nearby seminary — one of those celebrations turned into a nightmare as a 21-year-old gunman killed seven people and injured dozens of others at a parade. The right to possess firearms had led to loss of life, trauma and devastation to the families and communities of the victims.

These scenes have become all too familiar. In fact, dozens of other mass shootings took place over the Fourth of July weekend throughout the country. In recent months, we’ve seen a mass shooting at Robb Elementary School in Uvalde, Texas; a white supremacist shooting in Buffalo, New York; a nationalist shooting at Irvine Taiwanese Presbyterian Church in Laguna Woods, California; and shootings at a funeral in Racine, Wisconsin, a medical center in Tulsa, Oklahoma, a church in Ames, Iowa, and at another church in Vestavia Hills, Alabama.

As the threat of gun violence has increased with no clear end in sight, my wife and I had a serious conversation about what our response should be. I asked my wife if I should consider obtaining a gun for protection. She paused and told me, “I don’t want you to get a gun.”

When I asked her why, she said: “Our eternity is secure because of our faith in Jesus. We couldn’t say the same is true of anyone threatening to take our lives.”

I couldn’t help but wonder if this is the type of faith we all need to embody.

In the Bible, we are told that it is for freedom that we are set free and that our freedom should be used to serve one another in love. Our highest calling as Christians is unto God’s glory, the Apostle Paul tell us in his Letter to the Colossians, as we love God and love our neighbor with special concern for the vulnerable.

I would argue that our children and our elders, and those prone to harming themselves, are among the vulnerable. Our freedoms ought to bring about the flourishing of others, not their demise.

The proliferation of guns in this country, often argued as a “God-given right,” only seems to increase gun violence, not the other way around. Too many Christians seem to conflate constitutional amendments with biblical commandments.

Some have argued against gun safety legislation, saying we “cannot legislate evil away” and “Guns aren’t the problem; bad people with guns are the problem.”

I don’t know any serious-thinking person who believes legislation will rid any society of evil. If laws could change hearts, moral entities like the church might not be needed. Legislation simply acknowledges that evil exists and seeks to curtail it by protecting personal freedoms while limiting the potential harm inflicted by those who would abuse the same freedoms.

Another common argument is that the best solution to a bad guy with a gun is a good guy with a gun. In far too many cases, however, when “good guys” have guns, they aren’t able to respond quickly enough or else they freeze in fear — and I don’t blame them. This is in part why we need more gun safety legislation. One reason we have legislation is that we know that some processes are not able to withstand the pressures of human error.

Those of us advocating for gun safety legislation are asking that we ensure that people who should not have access to firearms are restricted by every reasonable means possible. This means making it harder to obtain firearms, legally and illegally.

Adding waiting periods, requiring universal background checks, increasing age limits and banning semiautomatic rifles would not strip people of Second Amendment rights. They would be inconveniences, intended to make it harder for those who would use guns to harm their neighbors.

If an inconvenience — especially one meant to slow the purchase of something designed to be as lethal as guns are — might save lives, why wouldn’t we at least consider it?

To be clear, I believe most gun owners are responsible, and I have no issue with responsible people owning guns. There are plenty of gun owners who don’t commit crimes. The biggest issue is with how easily and legally the wrong people can get access to guns and the type of guns they are getting access to.

Sinful people, intent on doing evil, are legally getting their hands on guns. We need to do all we can to stop that from happening. And if not stop it, we can at least slow it down.

Not long ago, the Asian American Christian Collaborative, which I lead, put together a multipartisan, multidenominational, multiracial and multigenerational statement calling for gun safety regulations that was signed by thousands of Christians on the political left and the right across the country. Our lead signatory was the Rev. Billy Chang, the pastor who was being celebrated as the Laguna Woods shooting began.

That statement reads in part:

Together, we must bring ourselves to the sobering realization that the children of Uvalde are the children of us all. The brothers and sisters lost in Buffalo and Laguna Woods are our family. We must seek a better path forward, avoiding the trap of helplessness and complacency. We must not only support change in words; Christians must be willing to advocate for and mobilize toward a more just society. We must not stand idly by. Only then will we possibly emerge from this relentless, national nightmare of mass shootings with a different future ahead.

We call on Christians in every context to love all of God’s children in word as well as deed. We invite you to take every possible action to ensure the flourishing of our communities through a commitment to live sacrificially (Romans 12:1-2) in love and service of our neighbor (Leviticus 19:18), as Christ would have us live (Colossians 3:1; 1 John 2:6).

In light of all the shootings, this might be what love demands. Love requires us to embrace inconvenience. Ask any loving spouse or parent how much inconvenience is required and they will tell you at least this much. At the heart of love is self-giving sacrifice, and without it there is no true love. This is the love that Jesus demonstrated and the love that Christians are called to. It’s a love that doesn’t stand on its rights or insist upon them.

This is not to say that we do not cherish our rights and advocate for them where they lead to the flourishing of all. But when our rights lead to the death of precious people made in God’s likeness, serious reflection and action are required.

Imagine if Christ had insisted upon his rights at the expense of our souls and the redemption of the world. The world would be doomed. But God, rich in mercy, took the form of a servant, willfully giving up his rights and privileges so that we might truly be set free and flourish for all eternity.

(Raymond Chang is president of the Asian American Christian Collaborative and associate chaplain at Wheaton College. The views expressed in this commentary do not necessarily reflect those of Religion News Service.)

Previous A Second Chance At Family
Next What Research, and My Faith Says, About A Woman’s Right to Choose