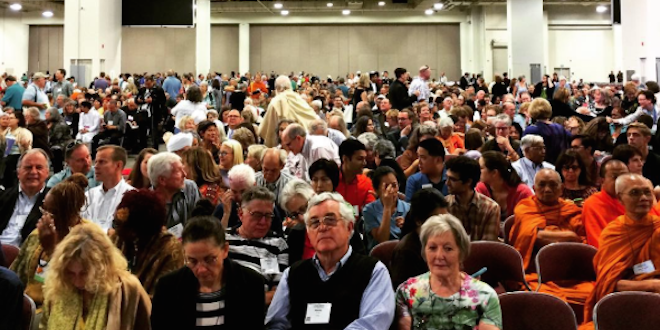 For just five days, 10,000 people pilgrimage from 80 countries and 50 religious and spiritual traditions to convene in a Utah desert town. For what purpose? What could possibly bring such a diverse group together? Think about the other times you might hear of a similar convention of diverse representation all coming together and you might reflect upon international sporting events like the Olympics. I truly can think of no other event. But again, why does such an array of diversity trek across the globe to this one location? Quite simple really, to learn and experience how we can create peace on this tiny planet we call home.

Parliament of the Worlds Religions is like the Olympics — the Olympics of the heart stretching to create compassion, understanding, unity and peace in a world plagued in violence and fear. Lofty goal — yes. But hope abounds and reverberates throughout the meeting halls, in the exchange between a Muslim and a Jew over a shared meal, in the story telling of a woman’s fight to reclaim her life after being assaulted with acid, and in each person I pass by acknowledging with a smile and nod because I see them. I see them as glorious individuals donning unique garments — an outward sign of their internal beliefs.

I learn that we may follow different paths, speak different languages, and our skin color may not be the same, but we have something in common — our humanity and our heart. We both yearn for compassion. We both have hope. And we both understand love and fear. It is by coming together, creating a new community, that we can honor our diversity through understanding because we can now see one another not as “other” — not as one to be feared — but as our brother or sister with a common purpose to be courageous enough to raise our individual voices, risking ridicule, ostracism, excommunication and even assault or assassination in the fight for hope and humanity against fear and violence.

One voice, like one seed, planted and nurtured in community of others, no longer standing alone and separate, becomes a chorus and forest of hope.