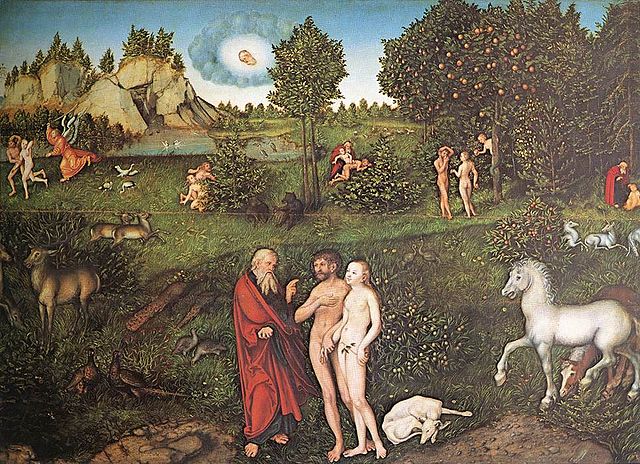 A Catholic commentary on creation

In the beginning, humans recognized they lived in times of darkness and light. They observed the movement of the sun across the sky. They discerned patterns among the stars in the same sky at night. They asked questions: why am I here on this land and not in the sky; where did I come from, where did the sun, moon, and stars come from, why is there a separation of day and night, why do other creatures on this land look different from me, etc. Over time they developed stories to provide answers to these questions, often with concurrent stories of divine being(s).

In their studies of pre-historic cave art, anthropologists and paleontologists demonstrate that the yearn for understanding origin, purpose and relationship between human and divine, as well as human and the natural world, has been present since humans first learned to represent life in pictures apart from themselves. Regardless of form, whether oral, pictorial, or, eventually, written, human life has always been seen in some type of relationship with a divine being(s) and the rest of the natural world.

Ancient Israel was no exception to asking and answering these same kinds of questions. The Hebrew Bible is one of the best preserved examples of how these ideas were understood throughout a people’s history. In particular, Genesis 1-11 is a portal through which we can discover the reflections of Ancient Israel on their understanding of the divine, of the human, and of the natural world.

Ancient Israel shared cultural symbols and literary forms with her Near Eastern neighbors, which is evident in the similarities and differences in her creation mythology. The origin myths of Egypt and Babylon feature primordial chaos brought under control and into order by divine command and/or action.  Creation of the natural world is a result of conflict or contest among several divine figures. Divinities are anthropomorphized by gender as well as through differentiations of personality traits and physical characteristics.  Often, these stories include intra-divine conflict and catastrophic violence.  Parent and sibling murder is common as divine beings vie for influence and power. In addition, the divinities of most ancient Near Eastern cultures are distinctly sexualized with sexual activity prominent in the causes and results of divine conflict. Aspects of weather, natural life, human emotions, and physical forms are embodied by certain god/desses.

These creation stories do not focus on the creation of humans. Either humankind is an accidental result of unrelated divine action or simply animated clay objects fashioned by a divine being. In some versions, a god/dess breathes into the clay figure to bring forth life. Sometimes humans are formed by divine tears or sweat. The purpose of human life is the production of sacrificial objects to honor and praise the divine, which in turn, manifests as protection and favor for families and communities.

Genesis 1:1-2:2 illustrates the shared motifs that ancient Israel used in their creation mythology. The formless dark water covers everything. Rather than emerge from within the natural world, Israel’s God exists outside of the chaos. Immediately, Israel has stated that their God is not related to disorder, but he brings order by sending a wind to separate the land.  He controls the dark space by creating light. He is not the object of creation. God is humanized somewhat by “speaking” creation into being; however he is not assigned anatomy. God is a unified being, not many in competition with one another. Most importantly, creation is not a result of violence. God created the natural world out of love, with purpose. He judges it good and blesses it.

The climax of Gen. 1:1-2:2 is the creation of human beings in the divine image. God also blesses them and gives them dominion over the natural world. Ancient Israel focused on human beings as both a purposeful divine act and the final piece of the divine plan of creation. The second creation story in Gen. 2:4a-25 shares the symbolic act of divine breath as the source of human life. It also portrays God working with his hands to fashion humankind out of clay as well as planting a garden. Once again, the creation to humans is a deliberate, positive act of God and not the result of divine war. Humans are the stewards of the natural world and helpmates to one another. Ideally, the Genesis creation accounts portray a human reflection of divine order.

Likewise, a comparison of the ancient Near Eastern flood stories demonstrates shared motif, symbolic numbers, and literary form, yet with a unique theological perspective in the Israelite version. The Babylonian story of Atrahasis presents the flood as an act of divine capriciousness. The purpose is to destroy humans because their noise disrupts divine sleep. Atrahasis represents humanity and is saved from dying by another divinity who disagrees with the initial decision to flood the earth. Genesis 6-8 positions the flood as a divine act, not because God can’t sleep but because humanity has become wicked and corrupted creation. It is also God himself who chooses one to live, Noah. God chooses Noah since he is judged as righteous.  In a sense, it’s as if God’s creation is so precious, that only a blameless person can truly appreciate and protect it.
In both flood accounts, Atrahasis and Noah are divinely commanded to build a boat, to bring along their family, and animals.  Both men survive to repopulate the earth and let free the animals.  However, only Israel’s God makes a promise to a human.  He promises to restrain himself and never flood the earth again.  Israel’s God is presented as trustworthy, not indifferent to humanity. The result of the Hebrew Bible flood account is God setting a rainbow in the sky as reminder of his promised. The result of the Babylonian flood story is an agreement among the divinities to curse humanity with infertility and disabilities so that their population is controlled. Noah, on the other hand, is reminded to be fruitful and multiply as were Adam and Eve.

In spite of theological distinctions, the ancient Near Eastern cultures shared a basic understanding of the physical form of the natural world as flat, circular land. They agreed on an upper level of water as well as water below or around the land. Moreover, as Near Eastern societies thrived alongside rivers, concerns about flooding and drought would have been common. It is possible that within a lifetime, an individual living in the ancient Near East could have experienced a devastating flood. Creationists argue that the flood is evidenced in the earth. They point to geologic studies of basalt strata and fossils present in the Cambrian layer as proof that a factual, historical global disaster is recorded in the Genesis flood story. Early Christian theologians also postulated this theory, particularly Tertullian and Augustine. They both thought that fossils were remnants of creatures killed in the flood. However, most professional geologists assert that the data is inconclusive and cannot be shown to prove or disprove a global flood of the duration and intensity as described in the Hebrew Bible.

The movement of the sun, moon, and position of the stars were considered by most ancient Near Easterners to be divine acts or the divine beings themselves.  Ancient Israel interpreted them as the boundary markers, both temporal and spatial, indicating divine order inherent in creation.  Egyptian, Babylonian, and Israelite religions depended on accurate observation, charting, and recognition of patterns of celestial objects to determine liturgical calendars as well.  Overtime, these ideas coalesced into a heliocentric model, which is the sun as the center around which the other celestial objects move.  As a result, most ancient Near Eastern cultures either directly identified or associated the sun with their highest, most influential, and powerful deity.

By the 4th century BCE, ancient Greek philosophers were arguing that the earth was actually spherical and in constant circular motion around a fixed center. Aristotle wrote that, while stars are fixed, other celestial bodies also moved in a circular pattern around the earth. Other philosophers, such as Seleucus, argued the same, but with the sun at the center. The geocentric model accounted for a Prime Mover, but was essentially disassociated with divinity. Most importantly, Aristotle argued that the universe and the natural world were eternal. This idea was a contradiction to the Hebrew Bible’s argument that before creation, there was only God, and only he was eternal.

Regardless of geo or helio centric models, early Christian theologians insisted on the Hebrew Bible interpretation that creation was willed by God out of nothing. While astronomy and geology was developing interpretive methods based on observation of the natural world, Tertullian and Augustine argued scriptural interpretations. Augustine did reject the literal meaning of the 6 days of creation in Genesis 1:1-2:2; however, he maintained that it truthfully represented the order of creation. The Catholic Church concludes that any theory is consonant with the two Genesis creation accounts as long as the proposition does not argue the eternity of matter.

The other stories in Genesis 1-11 not previously mentioned also function as etiologies of people, places, and human experiences. The episodes of Adam and Eve, and Abel and Cain in Genesis 4, provide an explanation of human suffering.  If, in ancient Israel, God is loving and good, and thus so is his creation, then why does his creation suffer? This theological tension is mediated by placing the origin of suffering in the acts of humans themselves. God allows the natural consequences of those actions to ensue; as does a loving parent who is raising a child to understand how to make proper decisions.

Similar ancient Near Eastern etiologies present human suffering as divine methods of control and submission.  The Genesis conflicts of chapters 3 and 4 are both between human and divine as well as interpersonal.  Other neighboring myths often do not portray significant human-divine encounters and the interpersonal problems are unusually between the gods (even though the results affect humans).  The genealogies of Genesis 4:17-25, 5, 9:18-10:32, and 11:10-32 function to tie Noah and Abraham to Adam, so that when Noah and his family are the only humans left to repopulate the earth after the flood, it can be seen as a continuation of the original creation of God in Adam.  Likewise, the call of Abraham is related to God’s creation and the righteousness of Noah.  Also, these genealogies provide reasons for the variety of human communities in the Near East and the spread of human civilization.

Modern paleontology, archeology, and linguistics often are interpreted by Creationists to demonstrate the veracity of Genesis 1-11. Research indicating common human ancestry out of Africa, common civilization roots in Mesopotamia, and the historical search for a Mother Language is culled through for information that could prove the existence of Eve and the Tower of Babel.  Most recently, scholarship has produced several popular books regarding the possibility that common language, civilization, AND genetic relationship can be traced to a single female ancestress emerging from ancient Anatolia and spreading across pre-historic Europe to the West and the Steppes to the East. Once again, though, these theories do not contradict most Christian theology as long as they account for a single generative eternal source that is outside of matter.