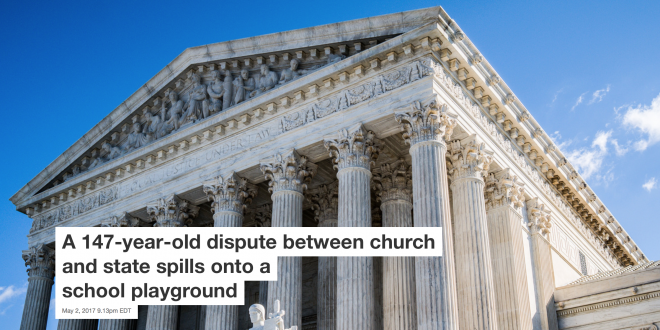 Why do so many state constitutions have provisions precluding funding for religious schools? Phil Roeder, CC BY

The United States Supreme Court recently heard oral arguments in a case from Missouri that could have a significant impact on state funding of religious schools.

The case involved a church in Missouri, the Trinity Lutheran Church, that had applied for state grants to purchase recycled tire material to refurbish its playground. The state declined the request due to a state constitutional provision that forbids funding for religious institutions, including schools.

As a legal scholar, a related issue that interests me is why so many state constitutions have provisions preventing funding for religious schools?

A number of state constitutions have clauses restricting state funding for religious schools, or for private schools generally. The language and history of these clauses vary widely.

Some state constitutional provisions denying taxpayer funding to religious schools are referred to as “baby-Blaines.”

The term refers to state constitutional provisions modeled on an amendment to the United States Constitution that was proposed in 1875 by Senator James G. Blaine, but was never adopted. That proposed amendment would have, among other things, prevented state governments from spending money to fund religious schools.

Senator Blaine was a powerful Republican senator from Maine. He also served as secretary of state and was the Republican nominee for president in 1884, but was narrowly defeated by Grover Cleveland.

However, the state of Washington was sued only for denying funding to those studying to become a minister or other clergy member. At the heart of the Trinity Lutheran case is the issue of whether the state can deny funding for things other than studying to become a minister. The history of the Missouri Constitution’s provision denying funding to religious schools is relevant to this question.

I am a signatory on an amicus brief in this case. I believe it is not a baby-Blaine. And here is why.

Article I, Section 7 of the Missouri Constitution does not closely track the language of the Blaine Amendment, and is in fact broader and more focused on a longstanding state concern about separation of church and state in Missouri.

It is true that Article I, Section 7 of the Missouri Constitution was passed in 1875 – the same year the failed federal Blaine Amendment was introduced. This has spurred debate among legal scholars. The key, however, is not the year it was passed, but rather the dates on which it was debated. The Missouri provision was discussed by the Missouri Constitutional Convention months before Senator Blaine proposed the federal amendment. This adds some fuel to the argument that it is not a baby-Blaine.

On the other hand even if the particular provision of the Missouri Constitution is not a “baby-Blaine,” the other issues in the Trinity Lutheran case remain important.

Whatever may be the outcome of the Trinity Lutheran Church case, it is worth noting how an often overlooked period in history continues to have an impact on issues such as playground surfaces in the 21st century.

Previous Ask a Buddhist: How do I address Buddhist nun?
Next Transgender athlete challenges ‘religion’ of sport