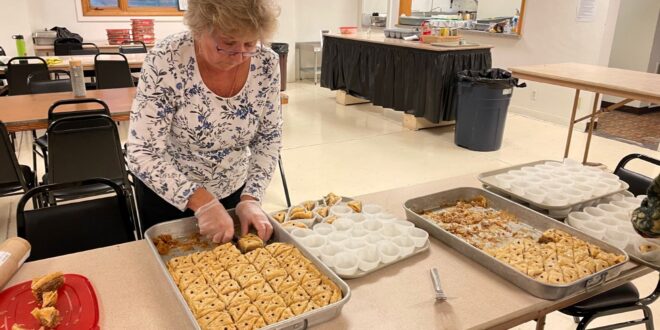 The festival, happening Sept. 22-24, will no longer feature the traditional dinner of beef kapama and orzo with mizithra cheese. That’s partly due to rising prices and partly due to supply chain issues, said the Rev. Daniel Triant.

“We went back and forth on that,” he said. “It’s been tough just in terms of making that happen. To make it work, we would have had to raise the price significantly.”

Instead, diners will find salads, gyros, Greek sausage and spanakopita (spinach pie). But the star of the show is the pastries that have been coming out of the church’s basement kitchen for weeks. Baklava is a best seller and there are also Kourambiethes (powdered sugar covered butter cookies) and Koulourakia (twisted butter cookies). New this year are Melomakarona (honey drenched spiced cookies with walnuts).

“It’s really good,” Triant said of the Melomakarona. “Those are my favorite by far.”

The first planning meeting for the festival was held in February and the bulk purchase of ingredients started not long after. Most of the ingredients are purchased in bulk in advance through URM, but there are also several Costco runs involved and a few imported specialty ingredients are ordered from Seattle, said Irene Supica.

Her husband, the Rev. Stephen Supica, retired in 2020 after serving as the church’s priest for 32 years, but she still oversees the making of all the pastries for the festival.

This year’s shopping list includes 600 pounds of flour, 50 dozen eggs, 590 pounds of butter, 520 pounds of walnuts, three quarts of vanilla, 450 pounds of sugar and five pounds each of whole cloves and cinnamon.

That’s more than usual because the number of pastries prepared has increased by 50% from last year because they sold out, said Triant.

Supica and her crew are trying to make sure there are enough pastries to last the entire three days of the festival this year.

“We bought 50 more pans for baklava,” she said.

Baking started over the summer and volunteers came nearly every day to measure, mix and prepare.

“It’s recipes that we’ve used for decades,” Triant said. “The production is pretty intense. It’s all hands on deck.”

Those recipes have been put into a cookbook that will be available for purchase during the festival.

The baklava was prepared and then frozen raw. With the festival date approaching, it was thawed and then baked.

“They’re fresher that way,” Triant said. “Really, it’s the baklava we do that with because we make so much of it. Everything else is made fresh.”

On Monday several women were in the church basement cutting pans of baklava into pieces and boxing them up. Longtime church member Gale Deacon has been helping with the festival for decades.

“When they had the orzo dinner, I would come down and package that,” she said. “I used to take off from work to do that.”

She retired six years ago and now has more time to help with the pastries.

“I come down off and on throughout the year now that I’m retired,” she said.

She used to come and help with her husband, George, until he died two years ago.

“He always came more than I did,” she said.

Deacon said she enjoys chatting with other church members as she works.

In addition to a different menu this year, there will be other changes as well. The outside Taverna will not be there and while there will be dine-in seating available outside and inside the church, the basement will not be open for diners. The Greek dancers will be back in the courtyard this year.

Change is inevitable to such a long running event. Triant said it began as a fundraiser to build the church hall where the festival is now held.

“It grew from there,” he said. “Obviously, it’s popular. We think we’re the longest running Greek festival in the country.”

The food will be sold a la carte, with entrees priced between $10 and $12 and sides priced around $4 to $5. Tickets are not required, but people can buy preloaded OPA gift cards at the church Monday through Friday from 10 a.m. to 2 p.m.

Previous Values Have Roots
Next Ask An Atheist: Where did human beings come from?