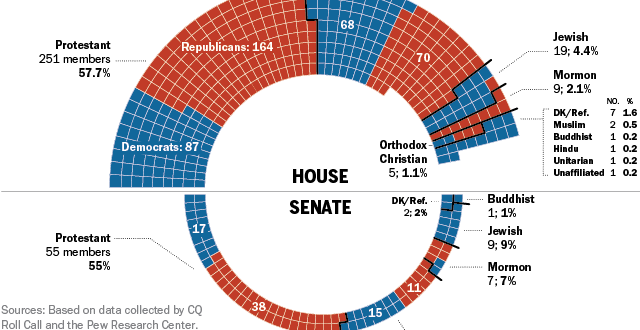 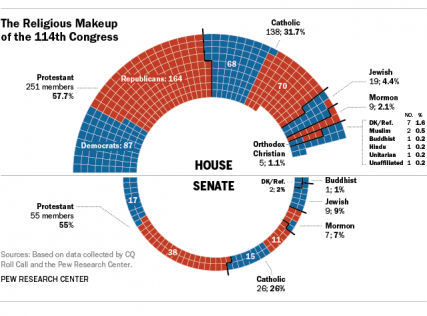 (RNS) Republicans will take full control of Capitol Hill when the 114th Congress is sworn in on Tuesday (Jan. 6), but even with a political shift, there will be little change in the overall religious makeup of Congress, according to a new analysis from the Pew Research Center.

Here are seven ways the religious makeup of Congress will (and won’t) change.

1) More than nine-in-10 members of the House and Senate (92 percent) are Christian; about 57 percent are Protestant while 31 percent are Catholic. The new Congress will include at least seven members who are ordained ministers.

2) Protestants and Catholics continue to be overrepresented as members of Congress. As of 2013, 49 percent of American adults are Protestant, and 22 percent are Catholic, according to a new Pew Research Center analysis.

4) Jews continue to have greater representation in Congress (5 percent) than most Americans (2 percent), but there are five fewer Jewish members in the incoming Congress than there were in 2005-2006. Of the 301 GOP House and Senate members scheduled to be sworn in on Tuesday, only one — Rep. Lee Zeldin of New York’s 1st District — is a Jew. The 113th Congress also had just one Jewish Republican, former House Majority Leader Eric Cantor, R-Va., who lost his primary race last year.

5) Many of the nation’s smaller religious groups are more proportionally reflective of the American population. Buddhists, Muslims and Hindus combined represent about 2 percent of Americans and 1 percent of Congress.

6) Two-thirds of the Republicans in the incoming Congress (67 percent) are Protestant, about a quarter are Catholic (27 percent) and 5 percent are Mormon.

7) Of the 234 Democrats in the 114th Congress, 44 percent are Protestant, 35 percent are Catholic, 12 percent are Jewish, 1 percent are Mormon, two are Buddhist, two are Muslim, one is Hindu and one does not identify with a particular religion.

Previous Jesus’ Life and Words or Resurrection? His Life or Death
Next The Disgrace of Sub-minimum Wages