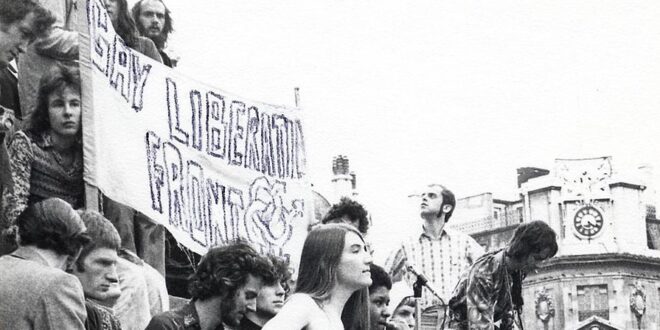 Gay rights demonstration in Trafalgar Square, London, including members of the Gay Liberation Front (GLF). The GLF in the UK held its first meeting in a basement classroom at the London School of Economics on October 13, 1970. The organization was very informal, instituting marches and other activities, leading to the first British Gay Pride March in 1972/LSE Library - Demonstration, with Gay Liberation Front Banner, c1972

June 28 marked the 51st anniversary of the Stonewall Riots, instigated by a police raid on The Stonewall Inn, a gay bar in Greenwich Village, New York in, 1969. The raid was, officially, about liquor licenses, but people who were caught in violation of laws prohibiting cross-dressing were also taken into custody. Those who had been at the bar and others nearby began to riot. Leaders of the riot such as Black drag queen Marsha P. Johnson and Puerto Rican drag queen Sylvia Rivera initiated a movement for LGBTQ+ liberation and rights, leading to the overturning of anti-cross-dressing laws in most states (by the 1980s), the legalization of same-sex marriage (2015), and protections against workplace discrimination for queer and gender-expansive individuals (2020).

As riots against police brutality continue to occur across the country, the story of Stonewall seems particularly poignant this year. Not only has 2020 brought a greater awareness of police brutality against Black individuals, but transgender, non-binary, and gender non-conforming people of color continue to face disproportionate amounts of violence in our country. Last year, there were 27 murders of transgender and gender non-conforming individuals reported (and likely many more unreported), mostly transgender women of color. So far this year, there have been 16, eight of which occurred between May 3 and June 9: Nina Pop, Helle Jae O’Regan, Jayne Thompson, Tony McDade, Selena Reyes-Hernandez, Dominique “Rem’mie” Fells, and Riah Milton. Thomas, McDade, and Thompson were shot by police officers.

Despite high numbers of such incidents the past five years, investigations into them continue to be inhibited. Misgendering victims can slow their identification and thus the investigation. Many perpetrators of homicide against gender non-conforming individuals use the “trans panic defense” to escape any responsibility for their hate crimes. In Tony McDade’s case, the officer who shot him is appealing to an amendment in Florida’s constitution to keep his identity hidden.

For those of us from or living in the PNW, it can be tempting to think, “It is so terrible that things like this happen in Florida and New York and Mississippi and Ohio, but at least things like that don’t happen here.” Don’t pat yourself on the back yet, though. Nikki Kuhnhausen, a 17-year-old transgender girl, was killed in Vancouver, Washington last year. The subsequent ban on using the gay/transgender panic defense in Washington state was named in her memory.  Titi Gulley, a Black transgender woman experiencing homelessness, was killed in Portland, Oregon last year. Gulley’s case was quickly deemed by local authorities to be a suicide when it first occurred in May 2019 and has only recently been reopened for investigation. The gay/transgender panic defense has not yet been banned in Oregon.

Fortunately, some states are banning the panic defense as a valid defense for violent attacks, an arrest warrant has been issued for Fells’ murderer, and Kuhnhausen’s murderer has been charged with second-degree murder and malicious harassment. These are important steps but knowing that tens of transgender individuals are killed every year should bother the public more than it seems to.

No matter what you believe about gender and sexuality, each of these individuals was a human being made in the image of God and worthy of love and dignity. Murder should outrage all of us, no matter who the victim is.

As you celebrate Pride and remember the Stonewall riots this month (and every month), say the names of those who have lost their lives to transphobia, cry out for justice and protections for your queer and gender-expansive siblings, and support organizations like the Lavender Rights Project, a Washington-based organization “providing low-cost civil legal services and community programming centered in values of social justice for trans and queer low-income people and other marginalized communities.”