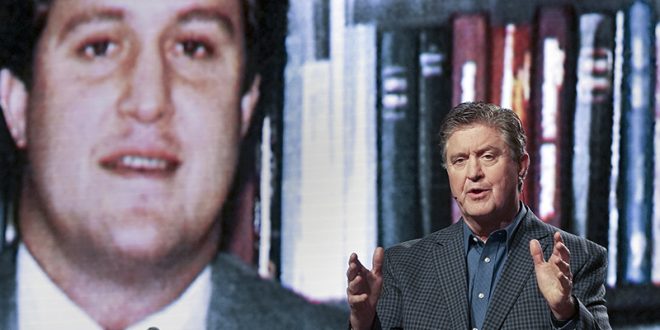 Steve Gaines, president of the Southern Baptist Convention, gives a Common Ground Testimony during the Pastors' Conference at the Phoenix Convention Center on June 12, 2017, in Phoenix, Ariz. Photo courtesy of Matt Miller

PHOENIX (RNS) Faced with continuing declines in membership and baptisms, Southern Baptist Convention President Steve Gaines implored delegates to the denomination’s yearly meeting to turn to God and put their emphasis on evangelism.

Gaines, a Memphis, Tenn., pastor who easily won re-election Tuesday (June 13) as president of the Southern Baptist Convention, said he would emphasize spreading the gospel in his second one-year term.

The SBC, the nation’s largest Protestant denomination, with 15.2 million members, has lost members for 10 years in a row and has baptized fewer people nine out of the last 10 years.

About 4,892 delegates, called messengers, are attending the meeting at the Phoenix Convention Center. All but one of the last 10 annual gatherings have had fewer than 10,000 messengers. That’s compared with attendance that peaked at 45,000 in the 1980s, when the denomination was immersed in deep theological battles that ended in what many call a “conservative resurgence.”

The regular meeting is usually preceded by an evangelistic “Crossover” event and this year it included a Harvest America Crusade at a University of Phoenix stadium featuring Greg Laurie, an evangelist who announced Monday that his church has joined the Southern Baptist Convention but will continue its association with the Calvary Chapel church network.

Southern Baptist leaders said they were praying more than 5,000 people would convert during the campaign. Officials announced Tuesday that 3,549 people had made professions of faith during the Crossover events. Crusade officials said a similar number of additional people made commitments during events that hosted simulcasts of the event.

Some experts say mass evangelism – stadium events such as those once led by evangelist Billy Graham – are not as popular as they once were.

“People still are converted and they still have this strong spiritual emphasis but the culture has changed so that that message attracts the attention of fewer and fewer people,” said Bill Leonard, professor of church history and Baptist studies at Wake Forest University School of Divinity.

At a pastors’ conference held during the two days before the annual meeting, speakers talked about “encouraging intentional gospel conversations,” one-on-one with people who might not go to church.

Some are convinced long-standing methods can still work, perhaps with a new twist of technology.

J.T. Roberts, 27, a student pastor at Laveen Baptist Church in Laveen, Ariz., worked with his church on 1,000 door-to-door visits in its neighborhood, and “15 people come to know Jesus as savior.” His church carried a simulcast of the Harvest America Crusade and three people who attended committed or recommitted their lives to Jesus.

“God still works — whatever method, whatever means of getting the gospel out there,” he said. “But I see the old ways are still working. God is still building his church.”