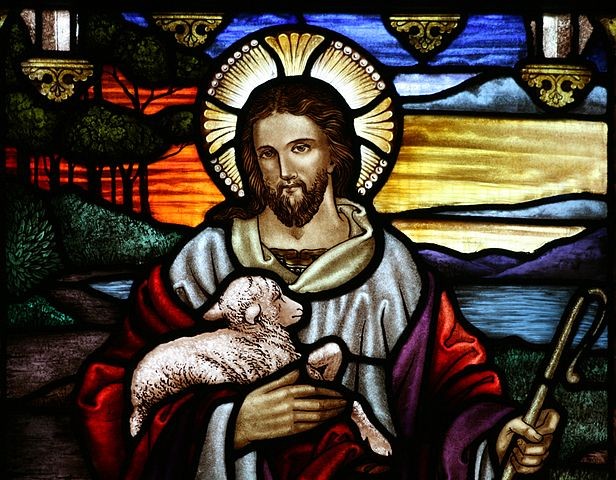 Stained glass at St John the Baptist's Anglican Church [1], Ashfield, New South Wales. Illustrates Jesus' description of himself "I am the Good Shepherd"

5 reasons why we want to believe Jesus was married

(RNS) Another day, another stunning blockbuster report that … Jesus was married! And to Mary Magdalene!

The latest version of this meme comes from Simcha Jacobovici, an author and filmmaker who is famous for promoting stunning theories about Jesus that on further review often turn out to be dubious.

Jacobovici’s new claim that he has decoded an old text that reveals Jesus and the Magdalene were married and had two kids (and she was a “co-deity” with her husband) came out this month and has also been widely dismissed.

But as happened earlier this year with the so-called “Gospel of Jesus’s Wife” — a suspect papyrus that receives a further debunking inthe latest edition of the Atlantic — people find Jesus’ sex life endlessly fascinating, and plausible.

Why is that? Here are five reasons.

There is nothing new under the sun, the Book of Ecclesiastes says, yet amazing discoveries in recent decades seem to tell a different story. Excavations in the Holy Land have yielded remarkable artifacts that provide unexpected insights into Bible history. But the emergence of ancient papyrus texts from the sands of Egypt really upended scriptural studies — and many common assumptions about Christianity.

The discovery at Nag Hammadi in 1945 of a cache of old texts, some of them “gospels” of the so-called Gnostic school — an early branch of Christianity — may be the most famous. Many of these texts, which were only popularized in the 1980s, present an alternate version of Christianity that  seems to exalt the role of women, and even suggests that Jesus was intimate with a woman, probably Mary Magdalene.

Given that background, it’s no surprise any new blockbuster claim is assumed to be credible.

2. Everyone wants a Jesus in his/her own image

Biblical scholarship in the past two centuries has fed periodic “quests” for the historical Jesus, the “real” Jesus.

But as the theologian and humanitarian Albert Schweitzer noted more than a century ago, we wind up creating a Jesus in our own image.

And so it continues today, as modern Christians see Jesus as a successful businessman, a proto-Marxist, a political zealot, a vegetarian, or maybe a gay man. Or, more commonly, married with children — an Ozzie and Harriet savior for an America that aspires to a secure middle-class life, a messiah who is also a best friend.

If Jesus isn’t the guy next door, there is a growing recognition by modern Christians that he was a first-century Jewish man. But that recognition also brings along an assumption — or maybe a stereotype — that all Jewish men get married and have a bunch of kids, or want to.

That wasn’t necessarily the case in Jesus’ day, as Vanderbilt University Bible scholar Amy-Jill Levine, among others, has noted. There are in fact accounts of monastic-like communities of celibate Jews, such as the Essenes, that may have drawn adherents like John the Baptist or even Jesus. They were praised by the contemporary chronicler Philo of Alexandria for an “enviable system of life” that was hailed by kings and ordinary people alike.

Many wonder if there wasn’t something else going on — a cover-up, perhaps? Poverty is one thing. But chastity?

From the Kennedy assassination to the moon landing, any claim becomes suspect in an era marked by a deep mistrust of institutions — and there are plenty of revelations to foster such doubts — NSA, anyone? Institutional religion is hardly exempt from this trend. (Hello, clergy sex abuse scandal?)

“The Da Vinci Code,” with its tale of an age-old Catholic brotherhood willing to do anything to protect the secret about the marriage of Jesus and Mary Magdalene, may be a thrilling novel. But you just KNOW it could be true.

The emergence of women’s rights has been one of the signature developments of modern life. But it has also proved to be an enormous challenge to male-dominated religions, and Christianity has been pretty much run by men since the beginning.

As women stake a claim to authority in churches, many want to bolster that argument by reclaiming the historic role of women in early Christianity. Mary Magdalene, long known as the “Apostle to the Apostles” for her central role in supporting Jesus’ ministry and announcing his resurrection, is a key figure in that effort.

The chief problem with hailing the Magdalene as “Mrs. Jesus” is that this hypothesis may be undermining the very goals women’s advocates want to advance. Making her the vicar’s wife, as it were, standing by her man and performing her wifely duties, is not necessarily the image feminist Christians want to highlight.

Nor does it reflect the record in the New Testament Gospels and the early Christian tradition.

Previous Prayer and the Autonomic Nervous System
Next Lent Vs. Zappos