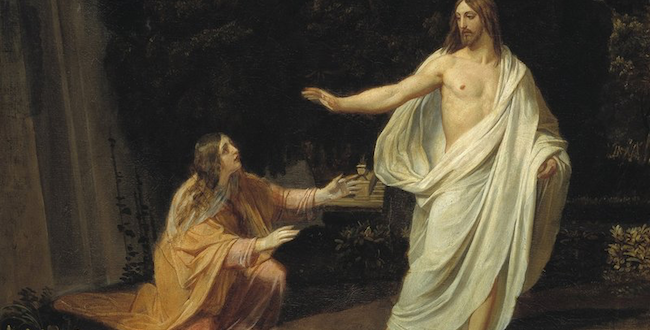 The Appearance of Christ to Mary Magdalene after the Resurrection (study), (painting by Alexander Ivanov, between 1833 and 1835)

Easter is upon us and the resurrection becomes an important topic to discuss during this time. One of the reasons most Christians find it hard to believe that I am a Christian myself is because I do not affirm the physical resurrection of Jesus Christ. And this may be a deal breaker for you. But I have reconciled myself to it, and am more than willing to explain my reasoning for this in much greater detail. However, I do believe that I can list five simple reasons why the physical resurrection of Jesus Christ is not a necessary requirement for Christian belief, and why it in turn most likely did not occur.

1.The Epistles are not consistent with the Gospels as to what happened. Most scholarly research affirms that most of the Epistles were written before the Gospels. The Epistles are first hand accounts and they are the earliest records. Some of the epistles affirm a physical resurrection, but some do not. Most accounts refer more to the spiritual implications of the resurrection resulting in New Life for the believer, and so on. There is actually very little historical information to be gleaned from the earliest records we have of Christian testimony. The most important resources we have is 1 Corinthians 15 and Galations 1.

In 1 Corinthians 15 there are some pretty interesting things written about the resurrection. It says that Jesus would have a spiritual body and not a physical one (v44-45). It also says that flesh and blood cannot inherit the Kingdom of God which would explicitly deny the physical resurrection (v50). Another thing that most people miss is that the list of resurrection witnesses are equivalent in respect to Paul’s vision of Christ. No where does Paul mention an empty tomb, and Paul’s own experience of the living Jesus had nothing to do with an actual physical body. Paul had a vision of the Lord, and for all intents and purposes this is the historical context of what became known as witnesses of the Lord’s resurrection that would later develop into stories of physical encounters.

2.The Gospels are not as “historical” as we would like them to be. Even the best scholarly research that affirms the physical resurrection of Jesus concludes that the Gospels are not 100 percent historical. The technical term often used is that the Gospels are “ancient biography” which can be connected to other ancient sources about historical figures. This genre type though is not entirely conclusive as to what can be called historical in the strictest sense. We know that pretty much all the places and names in the Gospels probably existed, and we know that there is a general resemblance to the “monuments” of Jesus story, like a Baptism by John, a Nazareth upbringing, a Galilean ministry, a priestly conflict, and a Roman execution. But the “ancient biography” genre does not afford much more in the way of historical insight into the Gospel narratives. The reason for this is because it is often granted that ancient biographies were heroic tales written to aggrandize historic figures with the heroism and idealization attributed to them from the adoring public. In these stories there were ascensions, miraculous tales, and anecdotes which were common for heroic idealization. So the genre type itself does not lend credit to a physical resurrection as a historical event.

When it comes to the event of the physical resurrection mentioned in the Gospels we find many parallels to other sources which could account for the narrative structure. The Empty Tomb can be a combination of Isaiah 53:9 and the Daniel story of the Lion’s Den. The Women witnesses may be literary constructs for the exact reason that contemporary readers would not inherently trust actual women witnesses. And the after-death appearances fit neatly within the ancient biography heroic aggrandizement given to its heroes, but the Lukan account of Cleopas parallels in many ways the Romulus story of Proculus.

3. Jewish eschatology and Midrash accounts for most of the mythicizing of the resurrection story. It is often noted that the earliest Christians were Jewish and that Jesus himself was a Jew, but it is often not noted what the spiritual climate of the ancient Jewish world really was like. There were two basic forms of synchronism adopted by various side of the Jewish people. The priestly side submitted to Roman rule and allowed for the use of Roman money in their temple, as long as it could be exchanged for their own temple money, and in turn the priestly caste was affirmed by the governing authorities and civil matters were able to determined by their own religious courts. Then there was the prophetic side which was practiced by the pharisees, and it had to relate the Torah to the current situation that the Jews found themselves in, and in doing so manifested a large amount of extra biblical material to develop and engage the Jewish community to understand the Torah to their current occupied state.

Some things not explicitly found in the Torah were common and widely held beliefs attached to the Torah as if it were one and the same. One such belief is the exaltation of Moses. This is even mentioned in the Gospels when Jesus changes his appearances on a mountain top for Peter and others to see. Moses and Elijah both come down to visit with Jesus, and the meaning for this event is based on the belief that Moses was “taken up” in the same way that Elijah was.

But a more interesting person of Jewish lore was Melchezidek. Melchezidek was born of a virgin, fulfilled the roles of both king and priest, and was exalted into heaven. Philo compared him to the Logos of God, or a Divine Being that grounds the universe in ultimate meaning. The Melchezidek movement in Jewish culture at the time of Christ shows that the first believers, who were Jews, would have been influenced to aggrandize their claims of Christ, associating their religious experience with the culture that they were immersed in. During that time it was not an unusual thing to use supernaturalism as a form of religious expression.

The first is that Ignatius never defends the physical resurrection on historical grounds. He defends it solely as what the bible says happened. He never defers to church authorities above him that handed it down to him. But more important is Ignatius’ motivation to defend the physical resurrection of Jesus. Ignatius comes from an old line of Catholic thinking that believes that Jesus’ physical body exists in the bread of the sacrament. When Christians take communion there is a belief that Jesus actually body and blood exist in the bread and wine. For Ignatius the ability to partake of the Eucharist was determined by the bishop. Thus, the belief in the physical resurrection reinforced the power structure that Ignatius was a part of.

Clement was also one of the first church fathers, and he believed in the myth of the phoenix, or at the very least used that myth to argue for the miraculous power of God, which begs the question of how the church fathers saw the miracle stories of God. If one can so easily transition from myth to miracle then should it not be considered that early belief in the miraculous was based in myth.

Even when we move to other more prominent figures like Ireneaus we do not find much different. He may have affirmed Jesus’ physical resurrection, but he also affirmed the same power structure of Ignatius, and he believed in some pretty weird extra biblical beliefs, as well. For instance, Ireneaus believed that Jesus died as an old man in his sixties or fifties simply because it made sense to him that Jesus experienced the fullness of the human experience from youth to old age. This underlies the problem with deferring to the church fathers. Their beliefs were in many way more convoluted than our today in spite of the fact that they should have been more pure.

But it is Justin Martyr who really takes the cake. Justin outright claims that the Christian belief in the miraculous is no different than the pagan belief in fantastic myths. For Justin they are one and the same, meaning that there was no actual virgin birth or physical resurrection, but the truth of Christianity is found in the moral development of the church to help the poor and needy, and to represent the love of God which Christ preached.

5. Historical arguments for the resurrection are a recent development in Christianity. The modern era saw the rise of historical criticism in academia, and through this many of the religious claims believed in through the bible became suspect and liberal protestantism took hold in Europe. In response to this development the more conservative Christians drafted “The Fundamentals” which would become the code book for Christian fundamentalism, and various “doctrines” became infused into the conservative mindframe, like the historicity of the biblical claims about Christ. And so it became incumbent to prove that the physical resurrection actually took place, but there were no such efforts that can be found before this late development in Christian history.

Now the physical resurrection may simply be a matter of tradition, and no real historical reason exists to believe in it, and so the source of Christian belief is simply the faith that it is true. If true on this basis then why does it become important to distinguish between a spiritual and physical form of the resurrection? One reason can be that the theology behind a physical resurrection is superior to the theology behind a spiritual one. I for one think that the idea of a physical resurrection is awesome. The hope of being able to keep my physical body for all eternity is incredibly powerful, but this is not a good enough reason for me to think that history had to come about a certain way rather than another way. The physical resurrection may have happened because of theological reasons, but if these reasons are true then they were not good enough to defeat the historical objections that would eventually exist even though it could have turned out otherwise.

Previous The importance and promise of Good Friday
Next On Easter, Pope denounces “oppressive regimes” but urges restraint