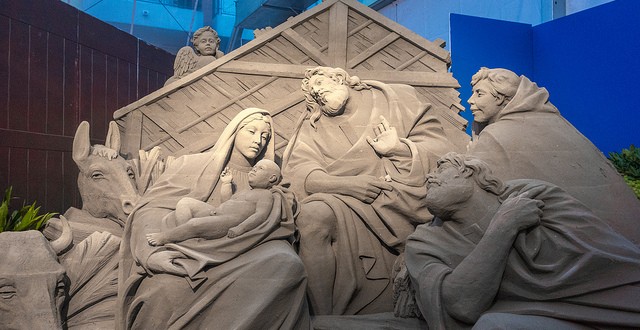 Mary, Joseph and Jesus were refugees

Next month, Americans will celebrate the birth of an Middle Eastern baby, born to poor destitute parents who were on the road with only the possessions they could carry.

Many people were traveling at the time, filling inns and towns, so no one would welcome a pregnant woman and her husband.  So she gave birth in a barn and laid her baby to sleep in a manager.  Soon after the child’s birth the family was forced flee a violent king.  They became refugees in Egypt.

We do not know the details of their journey or their time in Egypt.  We do know they were not turned away at the border.  And we can guess that many welcomed them and offered help, because they survived to raise their son. That son would one day offer hope to billions of people.

Today, many Americans want to turn away Middle Eastern people as destitute and desperate as that young family.  They claim fear of what an unknown person might be hiding. Imagine if all the people that helped that ancient young family had only seen danger in their faces?

There would be no Christmas.

Instead of fearing the refugee, let us celebrate Christmas truly and open our hearts and our arms to the Syrian people who are so afraid that they must flee their homes.   Let us give them hope.  Let us give them the hope we celebrate each year at Christmas: that love and peace are possible.