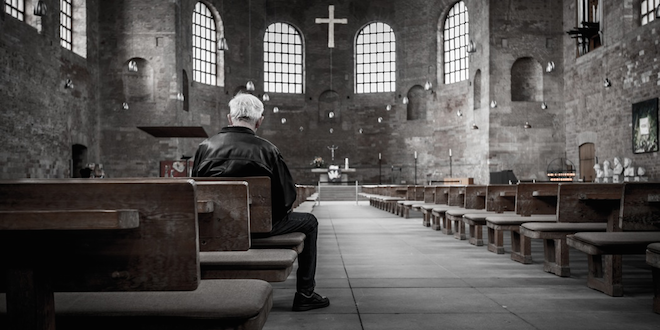 People still seek God, but not in buildings

There is much ado in religious and theological circles about the changing religious landscape. Hither and yon people have been weighing in on PEW’s studies showing that people are becoming less religious. This is causing everyone from militant atheists to celebrate, or radical evangelicals to double-down on their hipster pastors and acoustic concerts passed off as worship services. What catches my attention is the fact that propel aren’t abandoning their belief in a higher power, just the brick-and-mortar institutions they grew up in. If the old political maxim holds true, then I suspect that the religious landscape isn’t necessarily changing, just redistricting.

Rampant mistrust of leaders, everything from scandals surrounding Rajneesh, to Catholic priests and sexual exploitation of minors, to the exorbitant wealth of televangelists. People are not necessarily leaving their faiths because of God. People are leaving their faiths because of people. People are seeking God not in buildings, but through their acts of service. I think the great religious redistricting of America has nothing to do with politics, but exhaustion with the unwilling religious institutions to step into the 21st century in a connected, meaningful way.

It’s not just scandals of which people are growing tired. It’s the commodification of the afterlife, or the “Immortality Racket” as Peter Manseau calls it in his book “One Nation, Under Gods.” Our economic system inevitably touches everyday of our lives and Sundays are no different. What was passing the collection plate at church has now given rise to televangelists, and rampant greed as expressed through so-called prosperity doctrine.

There’s also the odd struggle of some to surrender their grip on reality at door when they go to church. Belief and fact have for some reason become synonymous in modern Christianity and to some extent other Abrahamic faiths. The unending culture wars surrounding religion and science is a perfect example to see this clearly.  Before the enlightenment, there wasn’t this conflation. Karen Armstrong explains:

“By the late 17th century, however, philosophers and scientists had started to use “belief” to mean an intellectual assent to a somewhat dubious proposition. We often assume “modern” means “superior”, and while this is true of science and technology, our religious thinking is often undeveloped. In the past, people understood it was unwise to confuse mythos with logos, but today we read the mythoi of scripture with an unparalleled literalism, and in “creation science” we have bad science and inept religion. The question is: how can we extricate ourselves from the religious cul-de-sac we entered about 300 years ago?

This question rings in my ears.

As Diana Eck writes in the introduction of Religion in America: “Immigration instigates change.” because we are a nation of immigrants, it is inherent that our nation will be prone to change, or at least pluralism. This isn’t necessarily a bad thing.

What many Americans take as fact that the united States was founded as a Christian nation — citing John Winthrop’s “Shining City on a hill” passage while ignoring the founding father’s contempt and distrust of established religion — Does not ring as true with millions to American families who worship at Temples, Mosques, Gurudwaras, and Synagogues for generations. And while Christian thought has been at the center of American culture from the beginning and ever-present in every chapter of the American story, so too have others influences.

In Spokane, many religious minorities have contributed to the success and story of our community. Buddhists workers stitched together the Inland Empire; Jewish financiers bankrolled the city’s revival after the Great Fire of 1889; Sikhs have framed along the Palouse for over a hundred years; Swami Yogananda held lectures downtown to hundreds of people, to say nothing of the Jesuit’s influence of education that gave rise to the quintessential “College town” feel of Spokane.

We urgently need to take heed of this subtle shift in our nation’s spiritual demographics, especially here. Because as we encounter one another, we must remember that what is important is not from what pew we worship, but how are we serving one another the rest of the week.

Paolo Coelho once quipped people change the world through actions, not their opinions. I think he may be on to something.

Join SpokaneFAVS for a Coffee Talk forum on “The Changing Religious Landscape” at 10 a.m., Dec. 5 at Indaba Coffee, 1425 W Broadway. Oberst is a guest panelist.

Previous Ask A Buddhist: Has Buddhism Become Trendy?
Next Thanksgiving as love, the image of God