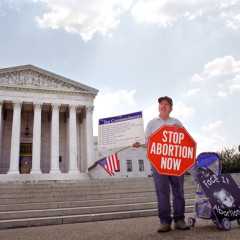 40 years after Roe v. Wade, how do Americans really feel about abortion?

In the past four decades, American attitudes have changed markedly on gay marriage, smoking, bullying and a host of other cultural issues.

But on Roe v. Wade, the 1973 Supreme Court decision that legalized abortion, public opinion today looks much as it did back then.

When it comes to American views on the legality of abortion, “the trend lines look about as flat as they can be,” said Daniel Cox, research director at the nonpartisan Public Religion Research Institute.

Just a few years after the justices decided Roe, Gallup pollsters began asking Americans about abortion. In 1975, 54 percent said it should be legal only under certain circumstances; last year, that figure was virtually unchanged, at 52 percent.

And the Pew Forum on Religion & Public Life this month found that 63 percent of Americans don’t want Roe overturned, a mere 3-percentage-point increase from 1992.

In more recent years, opinions on the morality of abortion have remained similarly stable, with about half of Americans (47 percent) calling it “morally wrong” and four in 10 considering it “morally acceptable” or “not a moral issue,” according to Pew.

So there you have the general, seemingly static American view on abortion: a lot of us aren’t comfortable with it, and favor some restrictions — but most want it to remain legal.

But are Americans’ feelings about abortion really so stagnant? On either side of the debate, are views simply passed down from parents to children, like eye color?

Dig a little deeper, say those who study public opinion and abortion, and you’ll find some interesting changes over time — some within various religious groups, and others that cross religious lines.

One dramatic change that social scientists have tracked in recent years is the salience of the issue — the degree of importance people attach to it. As the Pew study shows, abortion’s salience has dropped dramatically.

In 2006, one in three Americans (32 percent) said abortion is “not that important” compared to other issues. This month, more than half, (53 percent) held that view.

David P. Gushee, professor of Christian ethics at Mercer University, said the trend is evident in his own classroom, where for 20 years, he has asked his students to write a term paper on a topic of their own choosing.

He used to get a sizable stack of papers about abortion; now it’s far less common.

“I think students consider it a stalemate, and are moving onto issues where they feel they can make more of a difference,” said Gushee. “I have some students who have a moral problem with abortion, others don’t see it as a problem, but the energy is not there.”

Another way Americans may be thinking differently about abortion is in their relative unwillingness to be labeled on one side of the argument or the other, as “pro-choice” or “pro-life.”

Compared to data from the 1990s and early 2000s, “Americans are more likely these days to take a middle ground,” the study concluded.

President Obama, who supports abortion rights, hoped to lay claim to this middle ground when, in a 2009 speech at the University of Notre Dame, he exhorted both sides of the debate to come together where they can — in preventing teenage pregnancy, for example.

And weeks into Obama’s first term, when he established the White House’s Office of Faith-based and Neighborhood Partnerships, it named “reduce the need for abortion” as one of its goals.

(Anti-abortion groups, meanwhile, say Obama has shown himself to be nothing but partisan on the issue, and point to his administration’s 2011 contraceptive mandate, which they claim also requires employers to fund health plans for medication that could result in an abortion.)

Shifting views on abortion since Roe are perhaps most visible within certain religious groups, particularly Catholics and conservative Protestants.

In 2009, Gallup released a poll showing that Catholics, who had in the past more readily accepted Catholic teaching against abortion, now shared views that reflected those of Americans in general: there was just a 1-point difference on whether abortion is “morally acceptable” between Catholics (40 percent) and non-Catholics (41 percent).

The latest Pew study, which asked a different question on abortion, showed  that 73 percent of white evangelical Protestants consider abortion to be morally wrong — outpacing Catholics (58 percent) as the religious group most opposed to abortion.

“Where traditionally it was Catholics who were more opposed to abortion, that’s changed in a dramatic fashion,” said Cox, of the Public Religion Research Institute. “Now it’s white evangelical Protestants who are most opposed.”

Previous Seeking, understanding differences between rights and privileges
Next A novice nun ordination