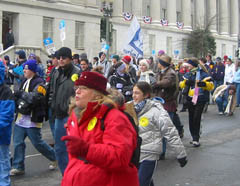 Instead, what’s really going on is a case study in the psychology of movement politics, where activists have to rally supporters with cries of alarm without making them despair that all is lost. At the same time, they must offer evidence that their efforts are paying off without leaving them complacent.

It’s a difficult balancing act, and lately the abortion rights camp has been the one to sound the warnings.

“As memories of women dying from illegal pre-Roe abortions become more distant, the pro-choice cause is in crisis,” Kate Pickert wrote in a bleak – for Roe supporters – and eye-catching Time magazine cover essay this month.

Pickert pointed to the growing number of state-level actions to restrict access to abortion services – the Guttmacher Institute’s annual review found that in 2012 there were 43 such provisions in 19 state laws – and the decrease in abortion providers nationwide, from 2,908 in 1982 to 1,793 in 2008.

Pregnancy centers run by conservative Christians as alternatives to abortion clinics have been proliferating as well, and there have been concerted – and often successful – efforts to cut or bar government funding of Planned Parenthood.

Moreover, the abortion rights movement is facing a generational divide, as younger women try to take the reins from aging leaders who they see as tone deaf to the public’s more nuanced views on abortion. Indeed, the “pro-choice” label is losing its luster while a growing number of young people like to identify themselves as “pro-life.”

Not surprisingly, some abortion opponents who have toiled for decades to achieve a breakthrough have been exchanging high fives over the abortion-rights angst.

“Of course Time magazine is right. It is axiomatic, it is the story of our times, it is the thing every pro-lifer knows: We’re winning this battle,” Tom Hoopes, a professor of communications at Benedictine College in Atchison, Kansas, wrote at the blog of CatholicVote.org.

Such confidence is oxygen for any movement, and understandable after such a long standoff. But it may also greatly overstate the current dynamics of the abortion battle.

In fact, surveys show that public opinion on abortion rights has barely budged in years, as a slight majority of Americans consistently want to keep abortion legal in most or all cases while about 40 percent would like to see abortion outlawed in most or all cases. According to the latest research from the Pew Forum on Religion & Public Life, an even larger majority wants to keep the Roe v. Wade decision intact.

Moreover, so-called “personhood amendments” that seek to leapfrog Roe and ban all abortions by declaring that a fetus is a person from the moment of conception have failed every time they have gone to the voters, even in the most anti-abortion states in the nation.

Some abortion opponents also concede that the re-election of President Obama has likely preserved Roe v. Wade for another generation, since Obama may get to appoint one or more Supreme Court justices over the next four years.

And many admit that the 2012 election changed the standard political calculus on abortion. Rhetorical excesses by Republican candidates who spoke about abortion and rape led top GOP leaders – including presidential nominee Mitt Romney – to distance themselves from the remarks and even declare they would not seek to overturn Roe, a position once considered anathema for any GOP hopeful.

At the same time, Democrats found that campaigning on a platform of preserving abortion rights and providing access to birth control was a winner among the growing cohort of single women. That essentially shifted the polarity of the culture war so that Democrats were often running on those moral issues while Republicans ran away from them.

In addition, the backlash over the short-lived decision in early 2012 by the Susan G. Komen breast cancer foundation to cut funding to Planned Parenthood demonstrated the depth of the public’s support for women’s health issues and signaled that the public may not be as supportive of curbing reproductive rights as some may think.

“Pro-abortion activists are losing? Really? If you believe that, I’ve got a bridge to sell you. Cheap,” said Pia de Solenni, who wrote a column at the National Catholic Register telling abortion foes not to believe the hype.

There is no convincing evidence that public attitudes are changing, she said, and the abortion rights movement is “a really aggressive possum playing dead.”

Indeed, in the days before the Jan. 22 anniversary of Roe, a number of anti-abortion leaders sought to tamp down a sense of overconfidence in the ranks, fearing that it could lead to the same kind of complacency that has recently worried abortion rights activists.

“We are a long way from a national consensus that could be reasonably and honestly described as pro-life,” said R. Albert Mohler Jr., president of Southern Baptist Theological Seminary. “Even reversing Roe v. Wade will not be enough.”

Striking down Roe v. Wade could actually pose a daunting challenge, according to abortion foes who note that the high court’s decision effectively created their movement in one fell swoop while making the abortion rights movement part of the establishment – thereby guaranteeing that its backers would take their victory for granted.

“Many pro-life activists fervently pray for Roe’s reversal,” Jon A. Shields, author of “The Democratic Virtues of the Christian Right,” writes in the latest edition of First Things, a conservative opinion journal.

“Yet Roe’s reversal would hardly represent a decisive victory for the pro-life movement. In fact, it would almost certainly revitalize a genuine movement for abortion rights. Pro-lifers need not make peace with Roe to recognize it has brought certain benefits.”

Previous Why no discussion of non-lethal weapons?
Next Group wrestles with ethics of assisted suicide