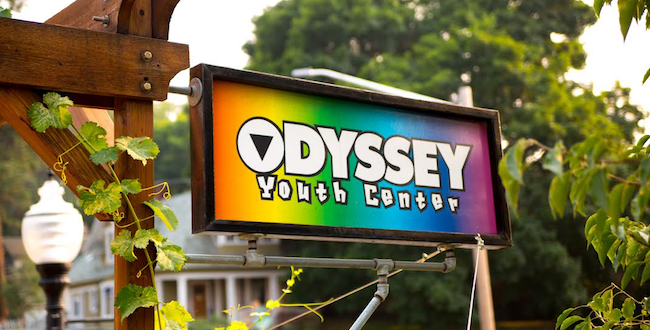 Every Monday, Wednesday and Friday, a pride flag hangs over a wooden balcony alongside relaxed greenery flowing from a trestle. A converted two-story duplex hosts the scenery, which may be easy to overlook in the quaint Perry district. Inside, the Odyssey Youth Movement is open for LGBT teens.

Since 1992, Odyssey has been a place to lose the heteronormative charade at the door and express the inner identity of one’s self. Odyssey’s resources have always been accessible to youth, although it wasn’t always as open 25 years ago as it is today.

“When I first came to Odyssey, it was hidden,” said Megan Cuilla, Chair of Odyssey. “I called the executive director, and they wouldn’t give you directions until they kind of screened you — this was 15 years ago — just to make sure it was a safe place for LGBTQ youth. I guess it was closeted, as you could say.”

Cuilla, who first attended Odyssey as a youth, then as a volunteer mentor, said that teens had to enter through a back alley for their own safety. The organization was only spread by word of mouth in Spokane’s LGBT community.

Teen attendees are able to have confidentiality and access to trained staff. Odyssey also tries to give young adults positive role models who are a variety of identities themselves.

The drop-in hours are between 3 and 8 p.m. for teens, and each day they can expect a snack after they sign in at the door with an anonymous unique code. Afterwards, they can study and socialize, and depending on the day of the week, participate in a focused discussion, learn life skills or watch an LGBT-themed movie for fun.

Odyssey has a colorful array of resources to provide to teens. A communal clothing rack is available for teens to receive clothes that best express their identities. They can also take free hygiene products if needed. Dinner is provided every day that the center is open.

The environment of Odyssey is tight-knit, some days fewer than 10 teens will come, but other days the upwards of 30 will come.

The Rev. Deb Conklin of St. Paul’s and Liberty Park Methodist Churches said that finding a community is “critical” for LGBTQI youth, especially outside of the traditional school setting where bullying may take place.

“Christianity is not meant to be an isolated religion. Christianity is about community. I would encourage LGBTQI people to look for a faith component.”

When Odyssey changed from the location on Washington St. near the Spokane Arena to the present location in the Perry District, Cuilla and Sullivan were afraid of potential protest. They said that instead, welcoming community reactions resulted in feeling protected.

“The neighborhood has been proud of having them here,” said Conklin, who is a member of the South Perry Business and Neighborhood Association and also said Odyssey is very active.

In addition to the three-days-per-week, 52-weeks-per-year drop-in hours, Odyssey hosts larger events such as the GSA Summit, and this year’s 25th anniversary celebration with a brunch of current and former members of Odyssey.

“I can see in the next 25 years, Odyssey keeping it’s community-building, networking feel,” said Interim Executive Director Ian Sullivan, who encourages teens to take the leap of faith and walk through the door to the safety of Odyssey. “But there will be so many other safe spaces and places to go so that Odyssey doesn’t have to be that spot [to go to] in crisis, but can be that community-building hub.”

Odyssey has maintained its purpose to  adapt to the needs of the community. The organization readily accepts feedback, and recently started a pilot program for LGBT adults aged 18-24 to come out to.

The organization has come a long way from its origins as a Spokane Regional Health District-sanctioned support group for men with aids in the 1990’s, and looks ahead to the future “out” ahead.

Previous Response to Massey’s column: Transgender people aren’t the ones who need to repent
Next Sensing Your Hidden Presence