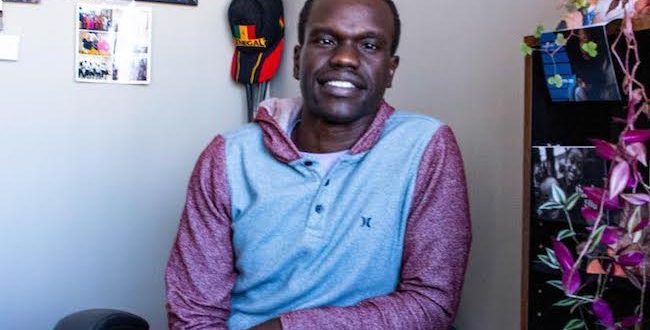 20 years of resilience: The story of Jackson Lino

When World Relief Spokane resettlement specialist Jackson Lino first came to the U.S. in 2000, he was only a teenager and had to reacclimate from his native South Sudan. However, thanks to the love and care he received, he now works to help refugees and bring attention to what is happening around the world.

“When we came to the U.S., we did not know very much. We had nothing,” he said. “I didn’t speak any English and that was something that I hoped and dreamed for to achieve, in my future, was to learn English and to be successful at something.”

The moment he landed in the U.S., Lino said he felt safe and that he found a place that he could call home where he could be somebody. However, he had to face trauma he experienced in Sudan after he arrived.

This trauma left him with trust issues, but the support received from volunteers at World Relief and people in Boise, Idaho, helped him open-up and trust people again, he said.

Lino came with several family members to escape religious persecution and were connected with a volunteer from World Relief Boise when they arrived. The organization helped them find housing, learn English, enroll in school and receive other forms of assistance.

Before settling into their apartment, Lino and his family were hosted by a volunteer. He said he remembered laying on the carpet and thought it was his bed because it was so comfortable before being told that he would be sleeping in another room.

Even though Lino faced problems with trust issues and racism, he said he saw his struggles as stepping stools where he did not let the discouragement he faced bother him. He added that he also found love and acceptance among members in his community, which helped him keep moving on to the next step and made adjusting to the U.S. easier.

“It’s not easy, it was hard and imagine coming from a country that you didn’t have opportunities and you didn’t have ways to be who you are,” he said. “And then you come to a foreign land where you’re basically a baby so you’re growing up all over again.”

Lino went to Centennial High School before going to Boise State University to study health and physical education. He moved to Fargo, North Dakota, where he did youth ministry work for several years before coming back to Spokane and found a job at World Relief Spokane.

Even though he did enjoy youth ministry work, he always had a desire to work with the refugee population.

At World Relief, Lino does a lot of speaking engagements and shares his stories with his end-goal being to share unity, love and care for others. He described World Relief as pivotal to his growth where he has built connections and wants to show people who refugees really are.

“Jackson is one of the people that would give everything he has to make Spokane a better place to live in and also to help other people understand what is life like as a new person here in Spokane,” said Sajida Nelson, resettlement case manager at World Relief Spokane. “He goes above and beyond his ability to actually help people and help others. Not just refugees, but also the people that live in Spokane or even other cities as well.”

Lino said the name refugee is not something he would use to describe people like himself, but would rather use the word resilient. He added that refugees are people with ambitions, knowledge, guidance, culture and talent who come with the mindset of giving to the community, providing and adding their flavor of culture to it.

“All of those people that you see or hear about in the refugee camps, they’re not terrorists, they’re not murderers,” he said, “they’re actually doctors, nurses, physicians, policemen, scientists, biologists, coaches and teachers.”

Lino said the millions of displaced people in the world are not trash but are people who are valuable and can give so much to the world, yet they are seen as poor people or terrorists. He added that the people seen in refugee camps did not choose to leave their homes or go to the camps but were forced to go.

“I am very fortunate that the U.S. accepted me and my family and helped us to feel safe, to feel like we belong somewhere and to give us a home because we didn’t have that in the past,” he said. “And even now I cannot go back [to South Sudan] and feel like that’s my home because I would not be coming back alive.”

Lino still practices his culture at home including speaking Arabic and has a community of fellow Africans he speaks with to make sure he does not forget about his culture and people.

Your donation can help us provide more local news coverage like this!

The Sept. 11 attacks changed many Americans’ faith communities and spiritual lives as much as it did how we see our world and one another.