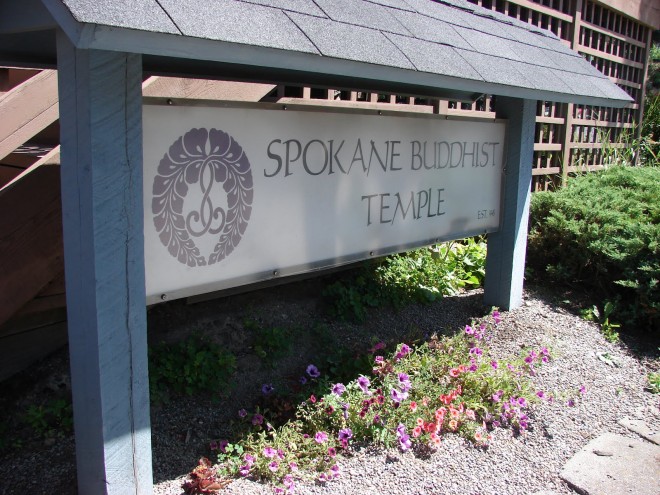 On Sunday a Sarana Affirmation Service will be held at the Spokane Buddhist Temple. 19 people will receive their Homyos, or Buddhist names, and pledge to lead the Buddhist way of life. The Bishop of the Buddhist Churches of America, Socho Umezu, will officiate.

At this special service, the lay-Buddhists will appear before the shrine of Amida Buddha and take refuge in the Three Treasures. Known by several different names, the Three Treasures of Buddhism are the Buddha, an enlightened person, the Dharma, the body of truth, and the Sangha, a Buddhist community.

A Buddhist name can be bestowed on a person either at an affirmation service or posthumously at a funeral service. The name is chosen by the recipient in consultation with a rinban, the head minister of a temple, and incorporates a word or Japanese character that holds special meaning to them. Receiving a Buddhist name indicates “that the person aspires for the Truth and is now counted among the disciples of Sakyamuni Buddha.”

The Sarana Affirmation Service will take place during the Spokane Buddhist Temple’s regular service time, at 10:30 a.m. on Sunday, Dec. 10. The Temple is located at 927 S. Perry in Spokane. All are welcome to attend.

To learn more about Buddhism or the Sangha in Spokane, contact the Spokane Buddhist Temple at 509-534-7954 or at SpokaneBuddhistTemple@gmail.com.

Previous Ask an Atheist: What happens after death?
Next Ask a Jew: Why do some Jews wear curls on the sides of their heads?

The resolution’s approval ‘set the tone’ for the United Church of Christ’s Special Edition General Synod, which runs through Sunday (July 18).