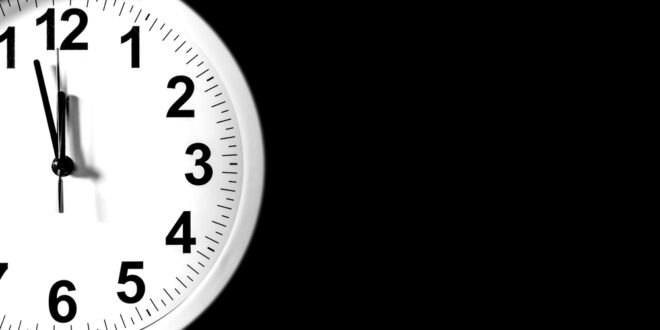 The latest report of the atomic scientist shows the symbolic Doomsday Clock 100 seconds to midnight, the closest its ever been since it was created to measure nearness of the end of the world. / Photo by hokle1305 (Depositphotos)

The clock reads 100 seconds to midnight.

And all of us have every reason to be terrified.

Following World War II, the Bulletin of Atomic Scientists developed the clock as a visual tool to help people understand the ongoing threat of nuclear Armageddon, the annihilation that would occur should the clock strike midnight.

Throughout the Cold War, the posted time varied as international conditions varied. Except for a brief period in 1953 after both the U.S. and the Soviet Union tested thermonuclear weapons, the closest the clock had been to midnight was two minutes, even during the Cuban Missile Crisis.

But it seems most of us are not paying close attention to events in Ukraine where Russia’s invasion has stalled, leading Russian President Vladimir Putin to double down on both actions and threats.

The threats are clear enough. But is there a steel will behind them?

That is the question Western allies are asking themselves. If news reports are to be believed, they really do not know. If Putin does go nuclear, there is no agreement on what might happen next, on how the West should respond.

Putin’s speech to the Russian people was remarkable for several reasons.

He announced a massive mobilization, bringing 300,000 new recruits into the Russian military to bolster forces on the Ukrainian front.

The mobilization order was received with very mixed emotions inside Russia. Despite Putin’s relentless propaganda that tells his people they are fighting Ukrainian Nazis, support for the war seems tepid.

And mobilization, Putin style, will not ease Russians’ concerns, and may heighten them.

The Russian version of a military draft is not like ours. It more closely resembles the roaming press gangs that provided crews for the 18th Century Royal Navy. It has the smell of desperation.

Military “recruiters” are said to knock on doors in the middle of the night and take young men away, putting them on buses headed to processing camps. Businesses are raided in the night with all young male employees taken away.

Putin told Russians mobilization would involve only young men with military backgrounds and with combat experience. But reports indicate the criteria either did not exist or are being ignored. Each region has a recruit quota, so there is pressure to find enough men, young or old, to meet the requirement.

The New York Times reported that thousands of men are fleeing Russia, trying desperately to get to countries that do not require visas, such as Turkey. The Times reported one-way tickets from Moscow to Istanbul were priced at $1,100, if tickets could be found at all.

Just as the mobilization is fueling dissatisfaction, economic sanctions imposed by the West are devastating the economy, making life hard for hundreds of millions of ordinary Russians who simply want to live their lives in peace and who have had no role in implementing Ukrainian war policy.

But there is a greater reason to fear Putin’s next steps. Russia has begun holding sham referendums in parts of eastern and southern Ukraine that Putin says will give him leave to annex those regions to the motherland. The referendums, which end today, are illegal under international law.

But as CNN reports, annexation will give Putin leave to declare Ukrainian resistance in those regions to be an attack on Russia itself.

Reported CNN, in his Wednesday speech “…Putin raised the specter of nuclear weapons in his address, saying he would use ‘all the means at our disposal,’ if he deemed the ‘territorial integrity’ of Russia to be jeopardized.”

This is scary stuff. News of the Ukrainian war and Russian threats is easy to find, particularly in print. But Americans seem pre-occupied with other matters. The midterm elections are little more than a month away, democracy is under assault, inflation is high, gas is expensive and it is football season.

The clock is reset at the beginning of each year and was set at 100 seconds to midnight last January in anticipation of war in Ukraine. In March, in a rare mid-year statement, the Bulletin announced the outbreak of war justified the frightening reset because “the most likely way nuclear weapons might be used is through an unwanted or unintended escalation from a conventional conflict. Russia’s invasion of Ukraine has brought this nightmare scenario to life. This is what 100 seconds to midnight looks like.”

I don’t think any of us truly expects an all-out nuclear war. Those alive during the Cold War know what it means to live with a threat so unimaginable it cannot be taken literally.

But this time the threat is real, is imaginable.

So, the Doomsday Clock continues to tick. And there are only 100 seconds to midnight.