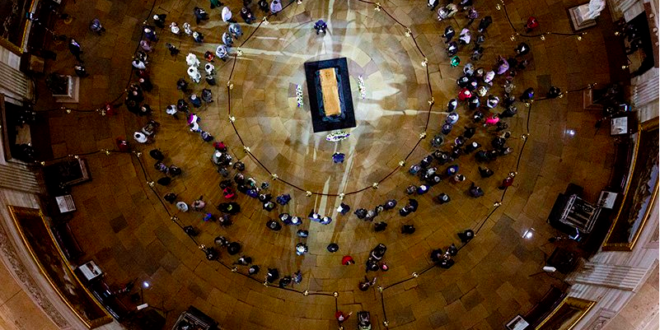 Visitors pay their respects as the casket of Billy Graham lies in honor at the the U.S. Capitol Rotunda in Washington on Feb. 28, 2018. It's a rare honor for a private citizen to lie in honor at the Capitol. (AP Photo/Jose Luis Magana)

Over the last decade, prominent people — household names and lesser-known leaders on social and moral issues — died after playing an outsized role in the realm of religion.

Here’s a sampling of some of the key figures, from a globe-trotting evangelist to an atheist, who have left their legacies for the next generations.

The evangelist who converted millions to Christianity and encouraged them to nurture their faith in local congregations died at age 99 on Feb. 21, 2018. He also was a counselor to numerous presidents, an innovator in the utilization of television, and founder of Christianity Today magazine.

“Very few people have gone for as long as I have,” Graham told Religion News Service in 1994 when explaining his enduring popularity. “I don’t know any other evangelists who have preached to the audience that we have over a period of more than 50 years. Secondly, I’ve had a lot of exposure in the press … over a period of time from the television and radio.”

Billy Graham speaks during the closing meeting of the Greater London Crusade at Wembley Stadium on May 22, 1954. RNS file photo

The boxing star who once was known as Cassius Clay and gave himself a new name after joining the Nation of Islam died at age 74 on June 3, 2016.

“Cassius Clay is a slave name,” he said. “I didn’t choose it and I don’t want it. I am Muhammad Ali, a free name — it means ‘beloved of God’ — and I insist people use it when people speak to me and of me.”

His faith also played a role in his decision to refuse to serve in the Vietnam War. His draft evasion conviction was eventually overturned and he joined mainstream Sunni Islam formally in 1975.

Muhammad Ali, center, speaks to Muslims while holding a book called “Towards Understanding Islam” in London in May 1966. Photo by Action Images/ MSI/File

The Holocaust survivor and Nobel Peace Prize winner who dedicated his life to remembrance of that genocide in hopes of preventing others died at age 87 on July 2, 2016.

After living beyond his experiences of being held by the Nazis at Buchenwald and Auschwitz, Wiesel urged American presidents and citizens worldwide to heed the needs of victims of war, famine and apartheid.

“I rarely speak about God. To God yes. I protest against Him. I shout at Him,” the deeply religious Jew told the Paris Review in 1984, when discussing how he retained his faith in God despite the death and destruction he had witnessed. “But open discourse about the qualities of God, about the problems that God imposes, theodicy, no. And yet He is there, in silence, in filigree.”

Nobel Peace Laureate Elie Wiesel is seen before participating in a roundtable discussion on Capitol Hill in Washington on March 2, 2015. Photo by Gary Cameron/Reuters

The scholar known as the “founder of black liberation theology” died at age 79 on April 28, 2018.

Cone’s theology, expressed in books such as “Black Theology & Black Power” and “God of the Oppressed,” portrayed Jesus’ blackness, contrasting with traditional scholarly approaches and spawning other liberation theories.

“Despite the obvious similarities between Jesus’ death on a cross and the death of thousands of black men and women strung up to die on a lamppost or tree, relatively few people, apart from black poets, novelists, and other reality-seeing artists, have explored the symbolic connections,” he wrote in “The Cross and the Lynching Tree.”

The Catholic woman who viewed fighting against abortion as a human rights issue died at age 88 on Aug. 13, 2012.

Every January since the U.S. Supreme Court’s landmark Roe v. Wade decision, throngs of demonstrators have gathered in Washington and marched to that courthouse’s steps to seek the overturning of legalized abortion. She acknowledged in a 1998 interview that she had a naïve notion about her plans to have a protest on the first anniversary of the ruling.

“We just thought we were going to march one time and Congress would certainly pay attention to 20,000 people coming in the middle of winter to tell them to overturn Roe vs. Wade,” she told RNS.

Born the son of Methodist missionaries, Smith, the author of the book originally titled “The Religions of Man,” became known for his personal examination of faiths beyond his own — learning about Judaism, exploring Native American spirituality, studying in a Zen Buddhist monastery — as well as his advocacy for using mind-altering drugs in religious rituals.

“In all these wanderings through other traditions, Christianity has always been my religious meal,” he told RNS in a 2000 interview. “But I’m a great believer in vitamin supplements. I can’t tell you how much it has contributed to my life. I see in it no conflict with my Christianity.”

The founder of the Unification Church, a leader known most widely for the mass weddings he blessed, died at age 92 on Sept. 3, 2012.

“From the time I was eight I was well-known as a champion matchmaker,” Moon wrote in “As a Peace-loving Global Citizen,” his autobiography. “I had only to see photos of a prospective bride and groom and I could tell everything.”

The religious leader believed that, since Jesus fathered no children, it was Moon’s mission to create a sinless family that united mankind, including interracial and international arranged marriages. Moon and his wife, Hak Ja Han, were dubbed “True Parents” by Unificationists. He was accused of brainwashing members and spent 13 months in U.S. federal prison on tax evasion charges.

Gesturing enthusiastically, the Rev. Sun Myung Moon delivers a sermon on “The New Future of Christianity” to an overflow crowd of more than 20,000 at Madison Square Garden in New York. RNS file photo by Chris Sheridan

The evangelical leader who transformed from President Richard Nixon’s “hatchet man” to prison ministry founder died at age 80 on April 21, 2012.

Colson started Prison Fellowship in 1976 after his release from federal prison on Watergate-related charges and was also known for advocating for conservative causes, including opposition to abortion as a chief architect of the 2009 “Manhattan Declaration” and a leader of Evangelicals and Catholics Together.

“There was more than a little skepticism in Washington, D.C., when I announced that I had become a Christian,” said Colson, a Southern Baptist, in 1995. “But I wasn’t bitter. I knew my task wasn’t to convince my former political cronies of my sincerity.”

The evangelical-turned-progressive Christian writer and speaker died at age 37 on May 4, 2019.

The author of the best-selling and humorous “A Year of Biblical Womanhood” who served on President Barack Obama’s Advisory Council on Faith-based and Neighborhood Partnerships was known for connecting via social media with readers and sharing her developing ideas of faith along with her questions and doubts.

“This is what God’s kingdom is like: a bunch of outcasts and oddballs gathered at a table, not because they are rich or worthy or good, but because they are hungry, because they said yes,” Held Evans, who had become Episcopalian, wrote in “Searching for Sunday.” “And there’s always room for more.”

An atheist whose acerbic disdain for organized religion helped fuel an age of “new atheism” died at age 62 on Dec. 15, 2011.

The author of the 2007 “God Is Not Great: How Religion Poisons Everything” grew in popularity with other public atheists in the wake of the terrorist attacks of 9/11 that were rooted in religious extremism. He and Richard Dawkins, Daniel Dennett and Sam Harris were dubbed the “Four Horsemen.”

“I have resented the idea that it should be assumed, now that you may be terrified, or depressed, that now would be the time to throw out values you have had for a lifetime,” he said, rejecting religion as he faced terminal cancer. “Repulsive. Wholly contemptible.”

Beyond these top 10 influencers, here are 10 more who merit a mention for their influence in particular religious realms:

I like what you guys are up also. Such clever work and reporting! Keep up the superb works guys I抳e incorporated you guys to my blogroll. I think it will improve the value of my site 🙂

One of our visitors not long ago advised the following website.