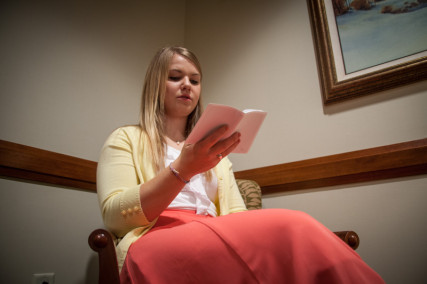 With 10 deaths so far this year, are Mormon missionaries safe?

SALT LAKE TRIBUNE (RNS) Four died in transit accidents. Four succumbed to health problems. One was electrocuted while doing a good deed and another fell to a stray bullet.

Sister Moody, from Elk Ridge, Utah, reads from the white handbook, which describes safety, health, exercise and other rules for missionaries, during companionship study at the Church of Jesus Christ of Latter-day Saints’ Independence Visitors’ Center in Independence, Mo. on Sept. 10, 2013. RNS photo by Sally Morrow

Ten Mormon missionaries have died so far in 2013, far above typical levels. And while church officials insist the spike doesn’t represent a trend, it has raised anew the question: Is missionary work safe?

The answer, according to the head of the faith’s Missionary Department, is an emphatic yes.

In a rare statement issued in September after the 10th missionary died, Elder David F. Evans said Mormon missions are inherently safe. At the same time, he offered words of solace to the affected families.

“For the church and particularly for the families of these missionaries who have lost their lives, we know that the loss of even one missionary is far too many,” said Evans, executive director of the Missionary Department for the Church of Jesus Christ of Latter-day Saints.

“To these remarkable families we extend our love, our faith, our hope and our prayers. And we pray that peace and comfort will be yours during these times of sorrow.”

The official statement came as the LDS Church copes with a surge of more than 16,000 young women and men added to its missionary ranks in just a year since the church lowered the missionary age to 18 for men and 19 for women a year ago.

Church officials now peg the number of missionaries in the field at 75,000, up 28 percent from a year ago. The figure is expected to climb to 85,000 by year’s end.

Evans said the church saw similar upticks in missionary fatalities in 2003 and 2008, with declines in intervening years. The church does not share its statistics on missionary deaths, but independent counts since the 1980s indicate the rate hovers between three and six a year.

The safety of Mormon missionaries spread across 405 missions worldwide does not come by luck or accident. The church’s far-flung presence exposes its members — and its proselytizing forces — to all manner of natural disasters, human crises, accidents and street crimes.

Stephen Ward, an 18-year-old missionary from Bountiful, Utah, was recently among survivors of a horrific train derailment in Spain that killed at least 80 people. Ward suffered a neck injury but was otherwise fine.

Missionaries learning Thai at the Missionary Training Center of the Church of Jesus Christ of Latter-day Saints in Provo Tuesday June 18, 2013. Aaron Proctor, their teacher, at right. Photo by Trent Nelson | The Salt Lake Tribune

Evacuations and other precautionary moves to protect young LDS missionaries are routine, and church leaders have a long record of managing Mormons deployed in spreading the church’s doctrines with high caution in the face of threats.

The Utah-based faith also pumps massive resources into training missionaries on safety and health, first at any of its 15 Missionary Training Centers followed by country-specific information given in consultation with church leaders on the ground.

Safety is also a key byproduct of the rigid etiquette, close supervision and obedience to rules — rising at 6:30 a.m. and lights out by 10:30 p.m. — embedded in missionary life, especially the biblically based tenet of living and traveling in pairs.

“When we were keeping the rules, we felt especially safe,” said Bryson Tudor, a 22-year-old returned missionary and Brigham Young University student who served near Lyon, France. “I felt like the rules were perfectly normal, because I could see how things could go wrong when we didn’t follow them.”

Traffic accidents are among the most common causes of death among missionaries — as they are for all men and women ages 18 to 24. Not surprisingly, missionaries receive safety training for bicycles and motor vehicles in preparation for their 18-month- to two-year-long stints.

Josh Burton, 23, from Alberta, Canada, died in a traffic accident in July, when a truck he was riding in overturned in Guatemala. Taylor Shane Ward, a 19-year-old missionary from California, died following an accident on State Highway 39 in southeastern Idaho.

Two other missionaries — 22-year-old Alesa Renee Smith, of Benton, Ark., and Jason Wiberg, 19, of Roy, Utah  — were hit and killed while riding bicycles, a common mode of travel for LDS missionaries in many locales.

Four missionaries this year have succumbed to illness or other health problems despite efforts by LDS officials since the 1980s to improve screening and delivery of medical services in the mission field.

Mormon Missionaries — The Church’s missionary program is one of its most recognized characteristics. Mormon missionaries can be seen on the streets of hundreds of major cities in the world as well as in thousands of smaller communities.

Scores of Mormon physicians donate their services to help missionaries — both on site and through a Salt Lake City-based team of 40 volunteer doctors and mental health workers that reviews and gives medical advice in cases worldwide.

“Our primary objective is to help provide a more effective workforce among the missionaries,” Donald B. Doty, a Utah thoracic and cardiovascular surgeon who heads the LDS Missionary Department Health Services, said earlier this year.

According to church statistics, fewer than 3 percent of missionaries are ill on a given day, a dramatic reduction from three decades ago.

Among the least predictable and most common dangers facing missionaries is random street crime, which in August claimed the life of 20-year-old Jose Daniel Encarnacion Montero, a Mormon from the Dominican Republic. Montero was killed by a stray bullet in Cali, Colombia, according to a statement from Ruth Todd, LDS Church spokeswoman. His companion and two other missionaries also at the scene were unharmed.

Siosiua “Josh” Taufa, 20, of Salt Lake City, was electrocuted in June. The talented football player was fixing a leaky roof during a rainstorm in the southwestern part of Guatemala when he slipped and grabbed an active power line.

His mother, Juliete Taufa, said those circumstances spoke volumes about her son, who chose to go on a mission over pursuing his athletic interests.

“He was trying to help out a family.”

The post With 10 deaths so far this year, are Mormon missionaries safe? appeared first on Religion News Service.

Previous POLL: Do you believe in the devil?
Next The 12 best Catholic quips from Stephen Colbert, the ‘pope of basic cable’