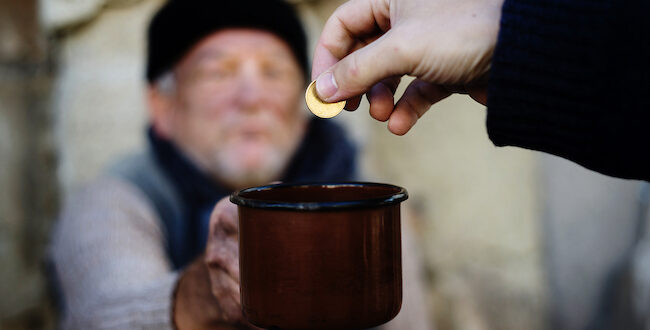 Person giving to a homeless man/DepositPhoto

 The Afterlife: “A Hundredfold — Now, in THIS Age”

The Afterlife: “A Hundredfold — Now, in THIS Age”

Read other posts in The Afterlife series.

The Gospel of Mark narrates two stories that show Jesus diverting a request to engage in speculative discussion of the afterlife in order to speak insistently about the nature of God’s in-breaking reign, in the here and now.

In a previous piece, we looked at how Jesus responds to a question from some Saducees regarding the post-mortem status of a hypothetical widow married to seven men successively. There, he critiques the ways in which patriarchal institutions treat actual, living women as sexual property; in God’s in-breaking reign, marriage is no longer a sexual property transaction, and the problems of the living poor are of more immediate concern than the property rights of dead men.

In Mark’s other “afterlife” controversy (10:17-31), Jesus responds to a rich man’s question about how to “inherit” eternal life. Jesus responds by reciting from the ethical commands of the Decalogue (the Ten Commandments). The man answers “I have kept all of these since my youth.”

Curiously, though, Jesus has slipped in one command not found in the Decalogue: “do not defraud.” The corresponding Greek verb (aposteréō) appears prominently in scriptural passages that warn the rich against exploiting the poor, and against defrauding them of their wages.

Thus, when Jesus then responds “You lack one thing; go, sell what you own and give to the poor,” that crucial “one thing” which (he implies) the man has missed is very likely that one command he had slipped in: “do not defraud…” [generally understood: “…the poor”].

Jesus’ implication (on this reading) is that the man’s wealth is ill-gotten, based on systemic disregard for this command. His call for the man to sell his property and to give the proceeds to the poor can accordingly be understood as a challenge to make reparations to those whom he has wronged.

Jesus then assures the man that if he does this he need not worry, for he will have “treasure in heaven.” Although this is often interpreted as an answer to the man’s question about an eternal afterlife, it’s worth noting that such assurances might be rather cold comfort to someone being asked to get rid of everything they have to live on, this side of the grave.

Nor does this assurance convince the disciples. Mark (who likes to postpone revealing crucial information to the reader) only now tells us explicitly that the man was in fact rich, and that it was this that explains his unwillingness to follow Jesus as an impoverished itinerant. In response to Jesus’ subsequent teaching about the near impossibility of the rich entering the reign of God, the disciples are “amazed, astounded, driven out of their senses by a sudden shock” (the literal sense of the verb exeplēssonto, with which Mark describes their stunned reaction). They ask each other, “who then can be saved?”

This response is comical, given that they themselves have left homes and livelihoods behind to follow Jesus. But Peter, finally coming to his senses, does (belatedly) note this fact. In response, Jesus solemnly assures them that

there is no one who has left

house or brothers or sisters or mother or father or children or fields,

for my sake and for the sake of the good news,

who will not receive a hundredfold now in this age —

— and in the age to come eternal life.

Only here, at the end of the narrative, does Jesus finally come back around to the theme of “eternal life,” introduced at the outset by the rich man. But the notion has now been reframed. This is not something that the rich (however pious) can “inherit,” as they have inherited their earthly wealth. It is something one receives unexpectedly, as a gift — just like the hundredfold yield of the parabolic seed that falls upon good soil (Mark 4:1-20).

And crucially, this gift comes precisely to those who — now, in this age — dare to abandon prior commitments to the vertical transmission of property down through familial patrilines, in favor of a horizontally organized network of a “hundredfold” new relations (“brothers and sisters, mothers and children”), whose property (“houses…and fields” — likewise “a hundredfold”) is at the disposal of those within this new, broadly extended “family” who are in need of it.

The claim that Jesus here implicitly criticizes the hoarding and transmission of wealth within vertically organized patrilines (that is, down through generations of fathers and firstborn sons) may seem a stretch to some. It is however supported by a striking structural feature of Mark’s text.

The typographical arrangement of the quotation above is designed to highlight this feature. Seven things are listed as being left behind, mirrored by seven things regained a hundredfold. Curiously, however, the lists are not quite identical: “fathers” is deleted from the second list, while numerical balance is preserved through the addition (at the end) of “persecutions.”

This can hardly mean that biological fathers are excluded, as such, from the new order of God’s reign. The omission of “fathers” and its replacement by “persecutions” makes good sense, however, if the reference is to patriarchal control of family and wealth, with increasing concentration of the latter within fewer and fewer patrilines, and to the (sometimes violent) resistance that such an alternative, horizontally redefined system of “family” and property relations can be expected to face.

Significantly, the proposed abandonment of the old system of family and property commitments is not represented here as a superhuman sacrifice. On the contrary, it’s portrayed as a kind of personal enrichment: one acquires a broadly extended social network, with the houses and fields of all these new “family” relations thrown into the deal. One regains a hundredfold what one has lost — and not in some future afterlife, but as part of a community of sharing, comprised of those who have chosen, here and now, to enter into the reign of God.

At this point, we discern another of Mark’s delayed “reveals.” We can now see that the “treasure in heaven” Jesus had promised the rich man, should he choose to abandon his conventional commitments to family and property and make restitution to the poor, was not about afterlife rewards for acquiescing in the demands of piety (that is, “pie in the sky when you die”). The whole focus of Jesus’ discourse with his disciples, following the rich man’s rejection of discipleship, is on what it means, in terms of family and property relations, to enter into God’s reign, “now, in this age.”  “Treasure in heaven” is thus to be understood in the same sense that we find articulated in the Lord’s Prayer: “Your will be done on earth, as in heaven.” “Heaven” here simply refers to how things are, when God’s will is done. f

Both of these Markan stories — the rich man’s question about inheriting eternal life, and the Sadducees’ question about the resurrection — show Jesus critically shifting the focus from the questioners’ concerns with afterlife speculation to his own concern with family and property relations in this life, and with how these relations are transformed, here and now, with the in-breaking of God’s reign.

In a previous contribution to this “Afterlife” series,” Walter Hesford comments insightfully on Thoreau’s response to his pious aunt, when she asked him on his deathbed whether he was prepared for the next life; Thoreau purportedly retorted “One life at a time, please.” In another, Hyphen Parent notes that while all branches of contemporary Judaism in some way or another acknowledge an afterlife, the focus for Jews is squarely on acting in accordance with God’s will in the here and now. Mark’s rendering of Jesus’ responses to speculations about the afterlife are to be understood very much in the same vein.