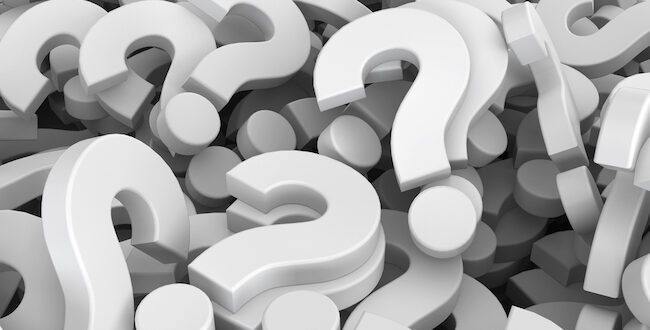 “I have a lot questions,” I said to the Lutheran pastor. “Then this is the church for you,” he replied.

Churchless for several years, I had considered returning to the institution when I noticed that several members of the Lutheran church in Moscow were out in the community protesting for peace and gay rights and working in our local food bank.

I wanted to be sure, though, that theological questioning as well as social involvement were welcome, and was glad to find that it would be. Not all churches are so open to a questioning faith, expecting instead the blind faith Tracy Simmons critiqued in her March 22 FāVS column, “What children can teach us about the power of ‘Why?’”.

Tracy points out that while we are sometimes urged to have the supposedly blind faith of children, children actually love to ask endless questions. This is how they learn and grow. Maybe this is why Jesus, unlike many during his time, so valued children and enjoyed their company.

A pamphlet of Lenten devotions passed out by my church asserts that “In the Gospels, Jesus loves questions far more than answers. After all, questions begin conversation; answers end it. Questions start new journeys; answers often stop them.” (“Grace Unbound,” March 12). While Jesus’ followers often wanted answers, he was more likely to challenge them with questions and with parables that open up questions like how can I be neighbor.

Teaching through parables, asserts one biblical scholar, is the only way to teach people with free will. We are free, we are challenged, to enter into the world of the parables and let them question us as we question their meanings.

When young I felt invited into the world of questioning by Martin Luther who in his “Small Catechism” admonishes his readers to “read, mark, learn, and inwardly digest” Scripture. I particularly liked the order to “mark” and “inwardly digest” what I was reading since I interpret this to mean that I should think about, question, wrestle with the texts I pondered. (Years later when I taught literature I would become upset if my students were not sufficiently marking up their texts.)

Certainly some biblical texts do seem to call for and to honor an unquestioning blind faith. Perhaps the most famous (or infamous) is the story in Genesis 22 of the LORD testing Abraham by asking him to take his beloved son Isaac to a mountain and sacrifice him. Without asking why, Abraham takes his son up Mount Mariah and binds him. In Jewish tradition this episode is called the Akedah, the Binding, and sometimes interpreted as a call to be willing to be sacrificed for one’s faith.

As you probably know, at the last moment the LORD intervenes and provides a substitute sacrifice, a ram, for Isaac. Abraham by showing his absolute faith has presumably passed the test. In a profound interfaith discussion of the Akedah, Rabbi Burton L. Visotszky, disagrees. Having attended college during the Vietnam war, Visotszky resented fathers who sent their sons off to be killed and so asserts that ”if this was a test of Abraham, Abraham failed the test”—he should have questioned the order to sacrifice his son (“Genesis: A Living Conversation,” p. 226).

Like the Akedah, a post-resurrection story in the Gospel of John seems to bind us to a blind faith. The disciple Thomas says he will doubt that Jesus has been resurrected until he feels Jesus’ wounds. When Jesus appears, Thomas touches Jesus’ wounded hands and side, and proclaims “My LORD and my God.” Jesus then says, “Have you believed because you have seen me? Blessed are those who have not seen me and yet have come to believe” (20.27-29 NRSV).

John and other New Testament writers urge their readers not to be “doubting Thomases”—after all they were writing for those who had never seen Jesus and so needed faith to experience Jesus’ life-giving presence. Yet Jesus himself, as noted above, valued questioning as a way toward understanding, toward deepening one’s faith.

Faith is indeed necessary and powerful in all realms of life. Faith may help healing. It generates hope.  Martin Luther King, Jr., believed that “the arc of the universe is long, but it bends toward justice.” What faith! Scientists need faith that their long hours of research may result in what they hypothesize.  They proceed both by questions and by faith.

I think that we all need a balance between faith and questions, a questioning faith.