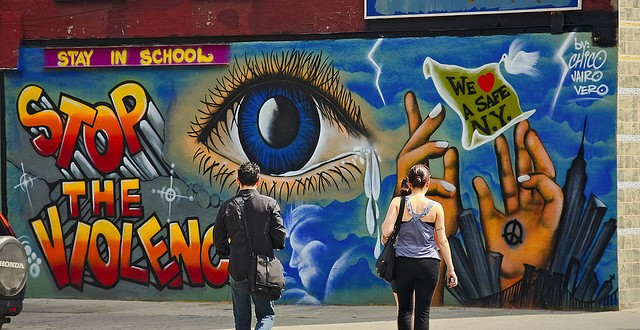 Violence and a Country of Denial

This column first appeared in News from St John’s, Oct. 12

As we have come to expect, our newspapers are full of people offering opinions about the most recent mass shooting in our country, this one at Umqua Community College, in Roseburg, Oreg.

On the one hand are folks like our president, Barak Obama, who continue to insist that “common sense” guns laws would reduce the killing. On the other hand there is Charles Krauthammer, who seems to believe that the real issue is mental illness. Krauthammer chided Obama in an editorial published in the Spokesman Review  for refusing to “address the other approach that could make a difference: more aggressive psychiatric intervention.” Still others propose that arming more or less everyone would solve this crisis.

All three of these ideas are symptoms of the denial in which we live.  This country has a lot of gun laws; nearly everyone who has committed mass murder has gotten weapons legally. This country does not have a higher percentage of mentally ill people than other countries where these sort of random attacks happen almost never. The best way to guarantee that we would see more of what happened at Northern Arizona University a couple of days ago when a fraternity party ended in the death of one student and the wounding of three others, would be to make sure that everyone has a gun.

None of these “answers” will work because none of them address the true issue. Gary Crooks came as close to clarity on this as I have seen in a while.  In his Sunday editorial he argued that the heart of our crisis is that “Americans like guns.”  Not all of us, he admitted, but “more of us than just about anywhere else.”  “The biggest difference” between us and the rest of the world where this doesn’t happen, he wrote, “is the affinity for weaponry that is ingrained in American culture.”  I believe he is right about that; I also believe he understated the point.

As a whole, as a culture, we are addicted to guns, and we are addicted to violence.  Since the Revolutionary War, we have been so successful using violence that it has become an addiction; not for each person as an individual, but for this society has a whole.  We are powerless over our attitude toward violence, and it has made our collective life unmanageable.  We are unwilling, yet, to admit that, and because of that denial, everything we have tried to make this country safer has failed, and instead made us less safe, less secure.

That string of failures will continue until collectively we admit that this ongoing crisis is not legislative: more laws aren’t going to work.  It isn’t about tweaking public policy: isolating the “crazy people” who aren’t like the rest of us, isn’t going to work.  Our crisis is spiritual, just as all addiction is at heart a spiritual crisis, and we must, as a nation, admit that before we can begin to recover.

I have seen recovery begin on a personal level, but I haven’t seen it on a national level.  It will take a realization that it doesn’t have to be this way; it will take a dawning sense that violence is a bad answer to nearly every problem we encounter; it will take a slow realization that the ways we glorify violence on television and video games, in sports and the events that our media deem newsworthy, are leading us into more chaos rather than away from it.  Most simply put, we will have to realize that we are powerless, and our lives are unmanageable, and that only a power “greater than ourselves” can restore us to sanity.

I don’t know when that will happen; I hope we hit bottom soon. But until we hit bottom, until we begin recovery from what we saw in Roseburg, and Sandyhook, and Columbine, and Virginia Tech, and an army base in the South, and Thurston High School a couple of decades ago, and a few dozen other places we have forgotten,  the killing will continue.  So pray for a miracle, the miracle of hitting bottom, the miracle of national recovery.

Join SpokaneFAVS for a Coffee Talk forum on “Responding to Violence in Modern Culture” at 10 a.m. Nov. 7 at Indaba Coffee, 1425 W Broadway.