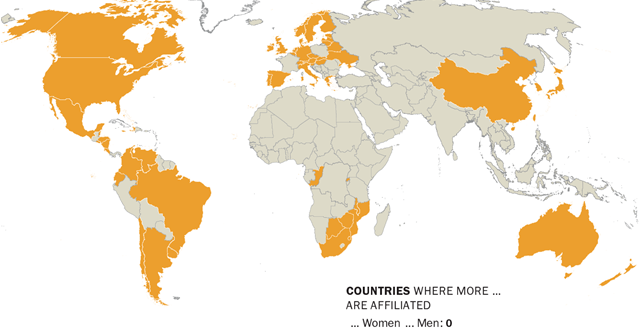 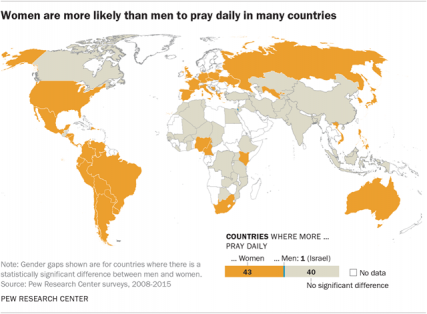 Data released this month by the Pew Research Center showed that women are more religious than men.

According to the study, globally, 83.4 percent of women say they identify with a religion, compared with 79.9 percent of men. Pew says this means there are about 100 million more religiously affiliated women on the planet than men.

The entire study can be found here.

Why are women more religious than men? FāVS writers respond below.

Men are socialized to be super rational like. So maybe we’re inclined to be more skeptical of faith in what we can’t see or prove?

Eliza Kinnaman: We don’t have to be ‘tough guys’

I think women are more religious then men because it’s one of the few things that we can be 100 percent passionate about. It’s one of the few things that no one can take away from us. We don’t have to be shy about it or continuously work for it. We have our values, and a lot of the time it pays off for us. We don’t have an image to keep up like men — to be the stern faced, strong, and stubborn guy. We can praise Jesus all we want and no one will really care, no one will think differently of us. In society though, if a man is to do that, is shows he’s unable of being the tough guy or a strong leader. I think it’s just our view from society these days.

“An estimated 83.4 percent of women around the world identify with a faith group, compared with 79.9 percent of men, according to Pew Research Center’s analysis of censuses, surveys and population registers in 192 countries and territories.”

I guess God isn’t dead and as usual women are first to believe it and proclaim it.

“He isn’t here! He is risen from the dead! Remember what he told you back in Galilee, that the Son of Man must be betrayed into the hands of sinful men and be crucified, and that he would rise again on the third day.” Then they remembered that he had said this. So they rushed back from the tomb to tell his eleven disciples—and everyone else—what had happened. It was Mary Magdalene, Joanna, Mary the mother of James, and several other women who told the apostles what had happened. But the story sounded like nonsense to the men, so they didn’t believe it.”‭ ‭Luke‬ ‭24:6-11‬ ‭

I don’t think that women are more religious than men. It depends on the criterion one uses to define religious. If you choose, as the Pew Foundation probably did for their survey, those behaviors that are conditioned by hormones that women have more of than men, and exclude behaviors that are conditioned by those hormones that men have more of, of course women will be seen as more religious. It’s like asking why do people who are taller measure out with more inches than shorter people. There may also be a socially conditioned element here too: if church attendance is used as the criteria, and men’s roles are defined as being home most of the week and women’s as being in the home most of the time, wouldn’t more women want to take advantage of getting out and about on Sundays and men want to relax at home?

Charles Vaden: They are mothers

I believe that if one is capable of bringing life into the world, women would be closer to the divine miracle.

Previous Poet Cornelius Eady, who focuses on family, race, society, coming to Whitworth
Next Join FāVS this week for a Pub Talk on Faith and Film