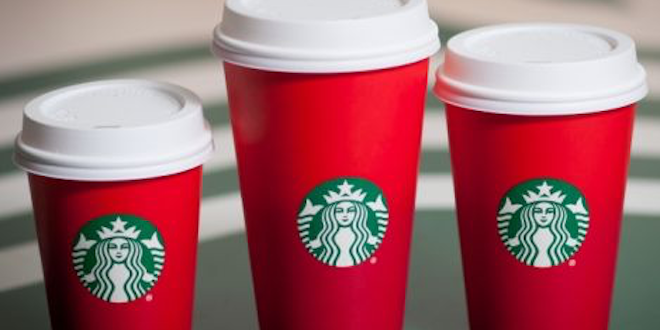 The Best Part of Waking Up Is Persecution In Your Cup

I’m having a difficult time taking seriously claims of persecution in a cup. Today there are fresh claims of a war on a dominant faith.  Today is the anniversary of Kristalnacht.

On Nov. 9, 1938, the German Reich coordinated attacks against Jews all across Germany. Jews were beaten and imprisoned. Synagogues were burned. Jewish businesses were destroyed. My husband’s grandmother was a Shoah-survivor. On Kristalnacht, her rabbi was beaten and her synagogue burned. By the end of the Second World War, there would be no Jews left in that town. Some like Bubbe ran. Everyone else was killed. In 1942, the last two Jews left in town were gassed in Auschwitz. They were Bubbe’s relatives.

Seventy seven years later, some American Christians say they’re being persecuted because a coffee cup contains no references to their deity.

Anti-semistism is still rampant around the world. Islamophobia is threatening and raging. Have we already forgotten that just weeks ago, there were planned armed protests against Muslim communities all across the United States? Religious persecution absolutely exists. Starbucks cups are not it!

Wishing someone a “Happy Holidays” is not an attack on anyone’s religion. It is an attempt to show respect for a variety of people and faiths. It is not removing God from anyone’s coffee/day/holiday season/life. It is recognizing that other faiths exist. Sharing the spotlight is not persecution.

Seventy seven years ago, Jews were beaten and their businesses and synagogues destroyed. That was only the beginning. 14 years ago, a wave of Islamophobia rose to place blame where it did not belong. Muslims have been beaten and harassed. One year ago, the synagogue here in Spokane was defaced with anti-Semitic graffiti. Weeks ago, there were fears and threats surrounding our local Muslim community. These are examples of persecution.

Persecution looks like broken glass, bruises, blood, and ash. Persecution does not look anything like a red Starbucks cup.

Previous Christ isn’t just for the Creche: Why the war on Christmas is about more than coffee cups
Next No New Trial for White Supremacist Convicted in Kansas Murders