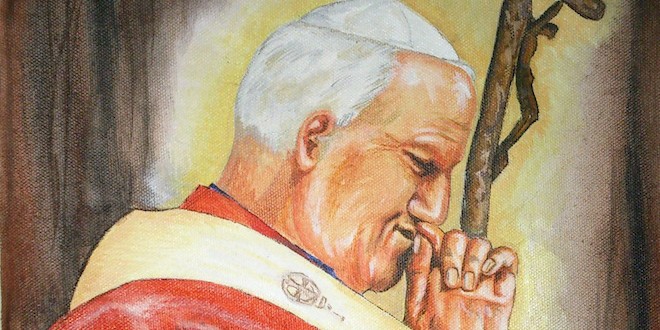 An acrylic painting of John Paul II by Justine Joy

When it comes to America’s political atmosphere, how often do we ask ourselves “what’s the point?” What exactly is the point of all the debates, floor discussions, billboards, commercials, and campaign stump speeches?

These questions and others, in my opinion, aren’t asked (much less answered) nearly often enough. Because if we truly did ask those questions, giving them honest thought and reflection on a regular basis, we would see just how far we’ve strayed as a nation and as a society from the real purpose of politics.

Politics, in its very essence, ought to simply be the process through which a society determines how it can prosper. However, it has instead devolved into a never-ending carousel of finger-pointing, name-calling, and people-pleasing, leaving our society on the side of the road.

The reason? I’m convinced it’s a direct result of the abandonment of the idea that discussions of faith go hand-in-hand with discussions about the well being of a society.

Religion and politics, specifically politics in the context of a free and just society stemming from the existence of a transcendent God, must be inseparable if a society wishes to prosper. Whether we like it or not, the entire concept of the freedom and dignity of human persons is only possible if there exists a transcendent creator. So, if we wish to have any integrity at all in pursuing the good of our society, the spiritual and the political must be talked about collectively.

Talking about the spiritual in conjunction with the political aids the common good by allowing us to use our reason to make inferences about the natural state of things. Through our reason, we become familiar with the natural law and determine the dignity with which humans deserve to be treated.

Because of this, the Catholic Church deserves a seat at the table. Despite the fear of many (maybe most), allowing the church to speak with any amount of authority in matters of human nature and human dignity wouldn’t mean allowing her to physically enter the political arena through endorsing candidates or parties. It would mean, however, allowing different (and at times unpopular ideas) into political discourse, and showing respect and objective thought to the contributions she brings.

In keeping with this, Pope St. John Paul II wrote in his encyclical Sollicitudo Rei Socialis in 1987:

“The Church does not propose economic and political systems or programs, nor does she show preference for one or the other, provided that human dignity is properly respected and promoted, and provided she herself is allowed the room she needs to exercise her ministry in the world.”

I use this quote especially because Pope John Paul II understood the need for proper dialogue and cooperation between faith and politics, perhaps more than anyone else who walked the earth with him. After all, John Paul II (then Karol Wojtyla) was under the thumb of Communist rule for much of his life in Poland, where human dignity was reduced to purely utilitarian means, and where the Church was definitely not allowed the room needed to exercise her ministry.

In Communist Poland, politics were separated from religion in the public square — gradually at first, I’d be willing to bet — to the point where they were entirely pushed to the margins and eventually made criminal.

This, in my experience, is what so many people today in America are seeking who have problems with believers and their supposed crusades to “force their views” on others. With religious beliefs safely pushed to the side, it is said, the ideal functioning of society will finally be reached.

Why then, when that “ideal” situation was reached in Poland, did Pope John Paul II in 1979 stand in front of a shouting crowd of millions for 14 minutes as they shouted, “We want God! We want God!”?

Faith as a partner to politics is an uncomfortable, even foreign, concept to 21st Century post-Christian America. However, if our country is to succeed as a nation and retain any credibility in leading its citizens into the future, faith must be given credence. Integrity in the pursuit of goodness and truth is the only path to prosperity.

Join SpokaneFAVS for its next Coffee Talk on “Religion and Politics” at 10 a.m. Nov. 1 at Indaba Coffee/The Book Parlor, 1425 W. Broadway Ave. Sewell is a panelist.

Previous Father Knows Best: How can I forgive myself?
Next A Festival of Women Preachers