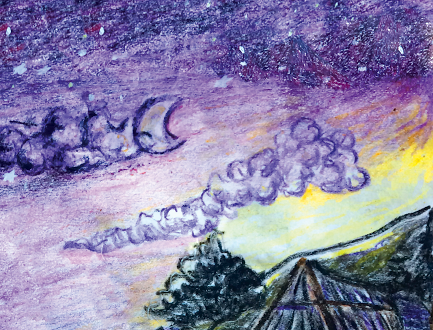 Spokanite ready to release book on the Haitian experience

“Seeds in a Dark Fruit Sky,” a book of Haitian short stories by local writer Rosemary McFarland, is planned to be released at the end of this year. These true stories, through the eyes of local Haitians, shed a new light on the day-to-day life of the most impoverished country in the Western Hemisphere.

McFarland said she got the idea for the project after spending time with the Haiti Bible Mission, a humanitarian non-profit that seeks to improve the local communities of the Caribbean nation. After she visited in April 2014, McFarland was inspired to return, this time help the people there in new ways.

“The director of the mission asked me to come back for a longer trip to work on a special project,” she said. “I brainstormed about what my talents are and how I could use them to help the people of Haiti. I decided to interview Haitians and write down their stories.”

With the help of translators, McFarland sat down with local Haitians, and gathered stories about a variety of topics.

“The stories are about daily life, or big events in people’s lives,” McFarland said, “They just told me stories based on questions I would ask, like ‘when was a moment you were happy?’ I collected almost 100 stories.”

McFarland hopes that the project will introduce Americans to the Haitian people, and the struggles that they go through.

“These are very real moments in people’s lives that most of the world has no concept of, and I am incredibly happy that I am able to share these stories,” she said.

Haiti is a Caribbean nation that has struggled with poverty, health issues, and political instability throughout its tumultuous existence. According to the Red Cross, seven out of ten Haitians live on less than $2 a day. The literacy rate is around 52 percent, according to the CIA. Health issues ravage the country. Haitians are especially prone to malaria, HIV, and tuberculosis, and many of them do not have easy access to a hospital.

McFarland hopes that the book will help bring the country to the attention of Americans, not only Haiti’s struggles but also their unique perspectives.

The book will contain Creole translations, along with the English stories.

Before it becomes a reality, “Seeds in a Dark Fruit Sky“ needs support via a kickstarter campaign, which is scheduled to launch May 1. Read more about the project on McFarland’s Facebook page.

Good for you Rosie. I was in Haiti twice as a journalist and the experience there changed me. I long to go back.