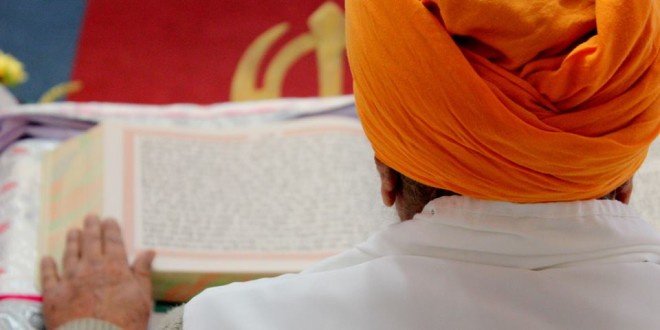 Babaji reads from The Granth at the Sikh Temple of Spokane, where the next Meet the Neighbors event will be held/Photos courtesy Sarah Cockey

The last census data shows that 89 percent of the county’s population is white.

“With that being said, I have found that Spokane is covered with many different religious institutions,” Malik said. “Even in Spokane, it is hard for any one religion to exist in isolation and ignore the others. Our community is connected.”

That’s why she’s helping the interfaith council organize Meet The Neighbors, an area house of worship tour that begins Dec 3 and continues through April. The original start date was Nov. 19, but was delayed due to power outages.

The event kicks off 6 p.m., Dec. 3 at Temple Beth Shalom, 1322 E. 30th Ave., where Rabbi Tamar Malino will talk about Judaism, the history of Judaism in Spokane and give a tour of the temple.

The tour continues at the Sikh Temple of Spokane (called a gudwara) later in December.

Malino said Meet the Neighbors is especially timely given the recent events in Paris because people are “hungry for peace.”

“People are looking for ways to make connection and to build understanding in our world,” she said. “This is a key opportunity to do that.”

She added that people are often hesitant to visit a new house of worship on their own and hopes after visiting the synagogue through Meet the Neighbors will feel comfortable going back again, have a better understanding of Judaism and will have an increased curiosity to learn about other religions in Spokane.

Interfaith Council President R. Skyler Oberst said the idea for Meet the Neighbors came from a survey the organization conducted last year, where the majority of respondents said they were interested in visiting various local places of worship but didn’t want to go alone and were worried about accidentally offending adherents.

“This takes the fear out of the equation. It’s opening up the door, pulling back the curtain. It’s an opportunity to get accurate information about their neighbors,” he said.

He added that it’s an event not only for people of faith, but for all residents.

He said the event was also fueled by recent vandalism throughout the area — the swastika that was spray painted onto Temple Beth Shalom in October, 2014, the robbery at Knox Presbyterian Church in July and the “Death to Islam” graffiti painted on the local Bosnian center, also in July.

So far about 100 people have showed an interest in attending the first Meet the Neighbors event tonight.

Oberst said he believes this is because people want to build a better Spokane together by building bridges, “not burning them.”

“Facebook, Twitter, CNN, etc are seemingly making the world smaller. The notion of knowing your neighbor now really means the global neighborhood. One cannot honestly, or easily, live in a silo.  Fear, rather than hate, is the opposite of love though fear can engender hate,” he said. “One might be surprised at the depth and breadth of the commonality of “wants” that we have as neighbors, of whatever faith – a safe community, good opportunities for the next generation, meaningful work, finding something bigger than ourselves in which to find a place, a bit left over from each paycheck.”

Future Meet the Neighbors venues include the Spokane Islamic Center, the Sikh Temple of Spokane, Sravasti Abbey, the Cathedral of St. John the Evangelist and a Baha’i Gathering. The interfaith council hopes to continue it after that. Oberst said guests should visit the council’s website for future venue details at www.spokaneifc.org.

Note: Skyler Oberst serves on the SpokaneFāVS board of trustees.

Previous Should refugees be vetted on the basis of religion?
Next Pope Francis is gone but his message remains