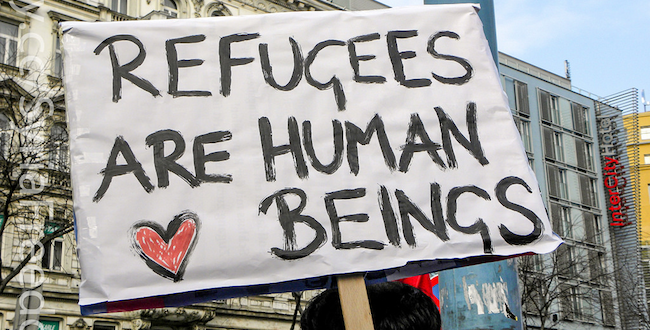 Responding to the refugee crisis

The current refugee crisis has stirred concern and controversy all over the world. “A quarter billion people,” The Christian Science Monitor noted last year, “have either fled disasters or migrated to escape poverty.” How should our nation respond? What can we do as individuals to help – as churches, temples, cities and towns, businesses, civic organizations? Can anything be done, practically and realistically, to meet this enormous need?

These questions have prompted many people of faith – and many people of conscience who don’t embrace a religious faith –  to ponder their responsibilities to fellow human beings in need.

As a Christian Scientist, I’ve wrestled with these concerns as both the humanitarian crisis and the political controversies have deepened. My church doesn’t tell its members what to think or do on these matters.  We make our own decisions as individuals, based on our highest sense of what’s right, and what prayer and spiritual leading inspire us to do.

Many Christian Scientists have participated in aid efforts over the years, both as volunteers and professionals. One church friend here in Washington, for example, worked in the Middle East for some years for a non-profit organization that supported refugees and longer term economic development.

The Christian Science Monitor reports on the troubles of the world and often takes strong positions in its editorials. The aim isn’t to express a “church view” but to draw attention, in a spirit of healing, to what needs attention and constructive practical response. Our churches as a denomination have participated in relief efforts in the past and continue to contribute where it can make a difference. But the human needs are bottomless and often far beyond our ability to meet them with even the most dedicated human efforts.

This isn’t cause for inaction, but it forces us to ask, What more can we do?

The most significant contribution a church can make, I’ve come to feel, relates ultimately to the spiritual light that a church can bring to the world. This light isn’t just a theology. It changes people’s hearts and understanding of themselves. It shines on each of us our true worth and spiritual nature as, in the Bible’s words, the “image and likeness” of God.

This vision is “very powerful,” as my church friend who worked in the Middle East stated. “When we get this vision of man as the reflection of God, as the way God expresses His own nature . . . then we see the preciousness of each individual man or woman or child.”

This spiritual understanding of man is also very practical. Another church colleague, now living in the Democratic Republic of Congo, became a refugee himself during the genocide in Rwanda in the 1990s. He was working as a teacher and translator there when he and his family were forced to flee. One harrowing journey with a hundred others from a refugee camp covered over 600 miles in 38 days. Because there were no doctors with the group, the sick were brought to my colleague for help through prayer. Cases of malaria, diarrhea, heart problems and other troubles were healed. The most challenging case was a pregnant woman who was nearly left behind, but kept up and safely gave birth upon reaching the humanitarian zone.

My colleague later wrote: “We felt God was with us. I call this journey, ‘How we walked in peace with God.’ Because . . . no one died in our group. Everybody came back safe and sound. All the children. All the women. Everybody.”

My colleague today is a Christian Science teacher and practitioner — one who gives his full time to the ministry of healing through prayer for those who seek his help.

The present refugee crisis challenges the members of my church to pray with equal devotion for those in need, and to live more fully the Christian ideal of love for strangers, seeing them as truly our neighbors. I’m sure many in other denominations and faith traditions feel a similar challenge. In the long term, I’m convinced, the answer to these tragic dislocations can come only with a change in humanity’s understanding of itself.

Are we all just transient mortals – refugees, in effect, living in an indifferent material universe, competing for limited resources, searching for elusive security, love, peace, home?  Or, as another refugee from Congo – another Christian Scientist – wrote in a church publication in 2005, are we “prepared to see the good” that God has “already established” for everyone?”

“God knows no borders. . . ,” he reflected, after two years in a makeshift refugee camp in Namibia. “As children of God . . . we belong forever to the spiritual universe of God. . . .” For him, this clearly wasn’t just a pious comforting thought. It was an insight that changed her life. He continued: “ Home is wherever [God] and God’s children are, and that includes under the blue sky during the day and the stars at night.”

William Scott is a retired architect who now serves as the Christian Science Committee on Publication for Washington State.

Previous World Vision Humanitarian Response Director to speak in Spokane
Next Judgment day? Trump and religion at the 100-day mark