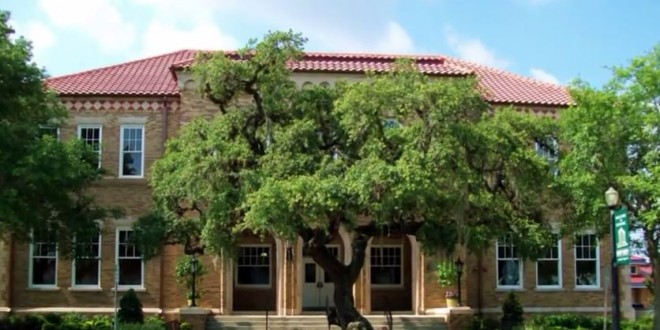 It almost sounds like a scene straight out of the movie “God is Not Dead.” On Tuesday, May 5, Campus Reform said that Lance “Lj” Russum, a humanities professor at Polk State College, allegedly failed a student after she refused to condemn her own Christian faith. According to Campus Reform, the 16-year-old student identified only as “G.L.,” was failed after she refused to “concede that Jesus is a ‘myth’ or that Christianity oppresses women during a series of mandatory assignments at the Florida college.”

A press release from Liberty Counsel said the student received a “zero” on four separate papers because she did not “conform to his personal worldviews of Marxism, Atheism, Feminism, and homosexuality.”

In a letter to the dean, Liberty Counsel demanded a full investigation of the teacher, including his behavior and course content.  The public-interest law firm also demanded the student’s papers be reviewed and graded by a different instructor.

In a press release issued May 4, Liberty Counsel added:

Russum’s classroom behavior is a reflection of his personal biases. Mr. Russum’s Facebook likes and profile pictures include Fidel Castro and Jesus Christ making an obscene gesture. The website “Rate my Professor” shows that G.L. is not the first student to be subjected to the professor’s viewpoint discrimination. His college email signature line includes a quote from a Marxist who praises Lenin, Stalin, the Khmer Rouge, and Adolf Hitler. These, along with the inappropriate course content, show that Professor Russum is seeking to impose his own values on students, in violation of the Constitution.

“Mr. Russum should not be permitted to use his position to punish students who do not conform to his anti-Christian views,” Mat Staver, founder and chairman of Liberty Counsel, said. “G.L.’s parents asked Polk State College to review this matter, but it refused, so Liberty Counsel is stepping in to help. According to its website, the college’s core values are service, integrity, knowledge, diversity, and leadership. No student should be subjected to such outrageous bias and outright hostility to their values by a professor. Being a professor is not open season to belittle and punish students merely because they do not subscribe to the professor’s radical opinions.”

Ironically, Campus Reform said the course description says students “are under no obligation to agree with classmates, authors, or the instructor, in fact, the instructor will often occupy the space of ‘Devil’s Advocate’ for the purpose of lively discussion.”

“The point of this is not to ‘bash’ any religion, we should NEVER favor one over another, they all come from the same source, HUMAN IMAGINATION and [sic] they demonstrate that humanity is one,” says Russum’s course syllabus, which, Campus Reform added, is “riddled with grammatical errors.”

“We have much to thank of [sic] humans like Michelangelo who took a sacred space, a temple to god, and made it a HUMAN space, a space where humanism can meet with god and discourse,” one assignment read. “Finally humanity and the gods are on equal footing and that is what the myths of Hercules, Apollo and Jesus are all about—the divine becoming human and human being divine.”

In her essay, “G.L.” argued that “it is a logical fallacy to make the assumption that Christian humanism’s goal was to ‘blend mythologies and make man the center’ simply on account of Michelangelo’s artwork or because Renaissance artists incorporate classicism.”  She reportedly received a “zero” on that assignment.

Donald Painter, Dean of Academic Affairs, told G.L.’s parents in an email obtained by Liberty Counsel that he reviewed the materials in Russum’s course and “believe[d] them to be appropriate.”  He apologized if they found the material “distasteful” but said nothing would be changed.  Instead, he reminded the parents that as a minor participating in a dual-enrollment program, the student recognized she might be exposed to “adult” material suitable for those “age 18 or older.”

In short, he told the parents and the student to “take a hike.”

Mike Adams, a professor at the University of North Carolina Wilmington, told Campus Reform that  a “cursory examination of this professor’s test questions leaves little doubt about what that message is. The school would be foolish to ignore reasonable requests for an independent investigation. Otherwise they may be on the receiving end of another kind of message in the form of a civil complaint.”

Richard Mast, a lawyer with the Liberty Counsel assigned to the case, said he is prepared to “take further action” if necessary.

“In terms of egregious behavior by professors, this is certainly one of those cases that will forge new ground on what not to do,” he told Campus Reform.  “This is the most wildly inappropriate behavior I’ve seen that reflects a growing hostility towards religion — Christianity in particular.”