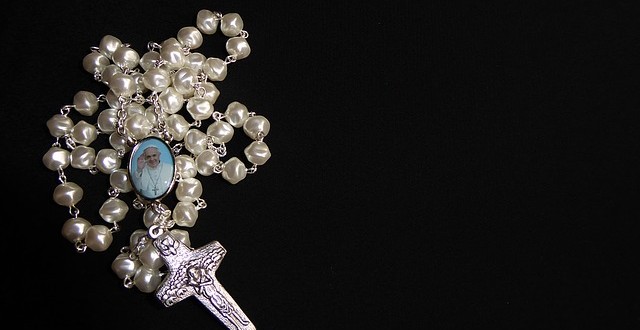 Religious Misconceptions about the Catholic Church

When I think of religious misconceptions and the Catholic Church, I legitimately have to stifle a laugh as I think to myself, “Where do I even start?”

It’s almost as sure a thing as death and taxes, in my experience, that misconceptions abound about the Catholic Church — what she believes, the ramifications of her members behaving badly, whether or not her teachings are outdated. One could look anywhere and find them.

A quote from the late Archbishop Fulton J. Sheen has always said it best for me:

It’s a very intriguing statement, when you think about it, and I believe it’s profoundly true.

There should be no doubt that the Catholic Church is a tour de force in our world, and has been for centuries. For better or for worse, everyone who’s been to a university, been treated in a modern hospital, or lived virtually anywhere in the world has been affected, directly or indirectly, by Catholicism.

One example is Pope Francis’ visit to the United States last September; for those days, the American public was treated to the “most positive news week I have ever seen,” as one writer put it.

But two questions still remain: Why should I care? And how can the good things matter when so much bad has been done by the Church over the centuries?

To address the latter first, it’s a good question, and one that deserves a real answer. For most things — like the Inquisition, Galileo, or the Crusades — the true answer is simply a matter of history (click the links for more). Suffice it to say, when it comes to those common objections to the Church, it’s by-and-large a simple case of misinformation.

For the other bad things — like the priest sex abuse scandal, or abuses during Reformation times by certain misleading indulgence preachers — no excuse can be made for such immoral behavior, especially from someone acting from a position of trust and authority. One victim of such a thing is one victim too many. And furthermore, as St. Paul writes in his beautiful discourse on the Body of Christ, “If one member suffers, all suffer together with it,” (1 Cor. 12:26).

But we must keep in mind, just as a bad schoolteacher doesn’t make the profession of teaching invalid, the same holds true that one bad priest doesn’t condemn the entire office of the priesthood or the Church as a whole. We must understand that the Church is greater than any one person.

Which brings us to the final question: Why should I care?

Well, I can’t tell you why you should care. All I can offer is why I do. I care because I’ve found Catholic Christianity to be the fullest expression of the Christian life possible.

I care because Jesus Christ actually lived and claimed to be God, then lived up to the promise. I care because I believe Jesus not only died and rose for me, but that he loved me enough to leave me with a Church, protected by the Holy Spirit, who I could follow to lead me to Him.

I care because I know I can’t offer myself salvation, and that when Jesus said “My flesh is true food,” he meant it.

I care because the 2016 Catholic Church has been one and the same since the very beginning, boasting saints like Ignatius of Antioch (110 AD) who said:

“Where the bishop is to be seen, there let all his people be; just as, wherever Jesus Christ is present, there is the Catholic Church” (Letter to the Smyrneans 8:2)

“Peter speaks there, on whom the Church was to be built, teaching and showing in the name of the Church, that although a rebellious and arrogant multitude of those who will not hear or obey may depart, yet the Church does not depart from Christ; and they are the Church who are a people united to the priest, and the flock which adheres to its pastor.” (Letters 66)

The Catholic Church isn’t just an institution. It isn’t just a charitable organization. Rather, it’s the vessel through which we encounter the Creator in an intimate, personal, and real way. That’s all.

Previous Ego, context and the death penalty
Next Obama pleads for tolerance in first visit to US mosque