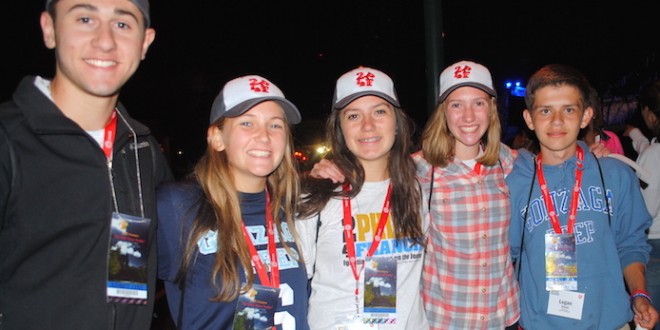 Five Gonzaga Prep high schoolers and their chaperones had tickets to the World Meeting of Families Papal Mass, where Pope Francis spoke about the future, modern family and religious freedom.

“It was so worth it to be that close to someone who is so amazing and is such an inspiration to so many people. To say you were only like 5 feet away from him is definitely worth the wait,” said Francis Bertotti-Metoyer.

She and her peers were close enough to snap up close and clear photos of Pope Francis on their cell phones. Hundreds of thousands of others watched the Mass on jumbotrons behind police barricades.

The Prep students, in Philadelphia as part of the “2 Philly 4 Francis: Ignatian Pilgrims on the Journey,” Jesuit high school pilgrimage, said the pope’s message encouraged them.

Luke Winkler said the pope’s words on immigration especially stood out to him.

Pope Francis said immigrants families in the U.S. should not be discouraged by difficulties here, and should strive to be good citizens.

“Society is weakened wherever and whenever injustice prevails,” he said. “I ask you not to forget that like those who came before you, you bring many gifts to this great nation.”

Winkler said that was a reminder to Christians to be charitable and accepting of all people.

Logan Schuh said at times he had difficulty understanding the pontiff, but said the pope’s presence sent out a message all on its own.

“His body language and the way we held himself on stage was empowering. Even though wasn’t able to understand everything, I could steel feel his message,” he said.

The Gonzaga Prep students agreed that a sense of calmness follows the pope, even with all the excitement that surrounds him.

The Secret Service was expected upwards of 1.4 million people at this weekend’s papal events, but on Saturday night could not provide an estimate of how many attended.

“As a world leader, he’s definitely one of the most respected and well known,” said Natalie Schwartzenberger. “I don’t think any celebrity or politician would get this big of a crowd or this big of a hype in the media. Everyone loves Pope Francis’ and his message. I think as a world leader he’s the it guy.”

During his public Mass, Pope Francis also said families are a “factory of hope” that should be protected and cared for. He said that’s especially true for children and the elderly.

And by referencing Philadelphia’s symbolic U.S. history, he touched on religious freedom saying, “(Religious freedom is a) fundamental right which shapes the way we interact socially and personally with our neighbors whose religious views differ from our own.”

“Religious freedom certainly means the right to worship God, individually and in community, as our consciences dictate. But religious liberty, by its nature, transcends places of worship and the private sphere of individuals and families,” he continued. “Our various religious traditions serve society primarily by the message they proclaim. They call individuals and communities to worship God, the source of all life, liberty and happiness. They remind us of the transcendent dimension of human existence and our irreducible freedom in the face of every claim to absolute power.”

Pope Francis said there are systems that dominate others by denying them rights and called those listening to engage in compassionate conversation and reconciliation.

“In a world where various forms of modern tyranny seek to suppress religious freedom, or try to reduce it to a subculture without right to a voice in the public square, or to use religion as a pretext for hatred and brutality, it is imperative that the followers of the various religions join their voices in calling for peace, tolerance and respect for the dignity and rights of others,” he said.

Schwartzenberger said the pope’s homily filled her with hope.

“He made me realize there’s a lot of things we can fix,” she said.

Those in attendance cheers and applauded throughout this sermon.

Earlier in the day Pope Francis received a loud round of applause when he spoke at the Cathedral Basilica of Saints Peter and Paul, where he emphasized the importance of women and the laity’s role in the planning for the church’s future.

“In a particular way, it means valuing the immense contribution which women, lay and religious, have made and continue to make to the life of our communities,” he said.

The pontiff will conclude his visit to the U.S. Sunday after another full day of appearances, including a meeting with bishops, a visit to the Curran-Fromhold Correctional Facility and then a final Mass downtown.