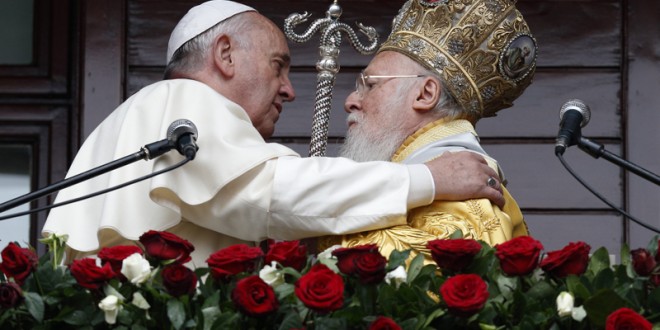 Pope Francis and Ecumenical Patriarch Bartholomew of Constantinople embrace after delivering a blessing in Istanbul on Nov. 30, 2014. Photo by Paul Haring, courtesy of Catholic News Service

VATICAN CITY (RNS) Never mind that Turkey is overwhelmingly Muslim. The most enduring image of Pope Francis’ three-day visit to Turkey was the moment when he bowed his head and asked for the blessing of the leader of Eastern Orthodoxy, Ecumenical Patriarch Bartholomew I.

Since his election last year, Francis and Bartholomew have forged a strong alliance culminating in their joint pledge in Istanbul on Sunday (Nov. 30) to work to bridge a 1,000-year divide between their churches.

The task takes on new urgency as Christians — Catholic, Protestant and Orthodox — face a wave of violent persecution in Syria and Iraq.

The pope also sought to reassure members of Turkey’s Orthodox community that they would not have to renounce their churches, traditions or unique history if full union were to be achieved.

“I want to assure each one of you here that, to reach the desired goal of full unity, the Catholic Church does not intend to impose any conditions except that of the shared profession of faith,” the pope told leaders.

But full communion between the two faiths, which split between East and West in what’s known as the Great Schism of 1054, is riddled with challenges.

As the pope himself pointed out on the flight home to Rome, it will never happen if left in the hands of the theologians, who cannot even agree on differences such as when to celebrate Easter.

What’s more, the Vatican continues to receive a cold shoulder from the largest Orthodox church, in Russia, which has never agreed to a papal visit to Moscow and has had a frosty relationship with Rome for, well, centuries.

The Rev. Emmanuel Lemelson, a Greek Orthodox priest from suburban Boston who joined the official Orthodox delegation during the papal visit, welcomed the latest steps with caution.

“The meeting was an incredibly important step towards reconciliation,” he said. “However, full union, if it were to occur, is likely to require substantial time.”

The pope’s relationship with the Muslim world, meanwhile, may be even more complex. Francis said he had sought a “global condemnation” of terrorism by Islamic leaders when he met Turkish President Recep Tayyip Erdogan.

“I told the president that it would be beautiful if all Islamic leaders, whether they are political, religious or academic leaders, would speak out clearly and condemn this because this would help the majority of Muslim people,” he said.

Speaking to journalists on his return flight to Rome, Francis confronted Muslim concerns about Islamophobia, saying that he understood why Muslims were offended by those in the West who automatically equated their religion with terrorism.

Francis’ predecessor, Benedict XVI, provoked outrage throughout the Islamic world in 2006 when he made a speech that seemed to suggest an inherent link between Islam and violence. He later apologized.

Francis may have put that issue to bed, but the violence generated by the self-declared Islamic State against Christians and Shiite Muslims has created new dilemmas for a pontiff eager to condemn the brutality without alienating Muslims elsewhere.

But Boston College theology professor James Morris, an expert in Islamic relations, said the Argentinian pope had the ability to rise above the limitations imposed by petty politics.

“The pope — like the Dalai Lama or other spiritual leaders — can articulate openly what vast numbers of people of conscience think, observe and feel in the face of such horrors,” Morris said.

“Political leaders are trapped in their calculus of local advantages and can’t afford to look unrealistic, as that appears weak.”