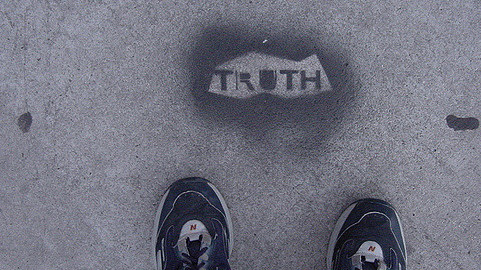 On the Nature of Truth

There’s a seemingly endless amount to be said about our post-truth era, with its alternative facts and its fake news. When considering the topic of truth, I hardly knew where to begin. Then I thought about the increasingly common notion that all opinions, or nearly all, are equally worthy of consideration. Not that all opinions are equally valid — even President Trump doesn’t seem to believe that. But child sex slavery in pizza parlor basements and Obama-ordered wiretapping apparently demand investigation every bit as much as Russian election meddling. Anti-Semitic fliers pop up downtown? Why not invite those cheeky neo-Nazis to the table for some good old-fashioned, First Amendment-protected dialoguing? They’re just expressing their opinion, after all.

It’s a tough time to be a postmodernist. I can imagine even some fellow liberals reconsidering the wisdom of seeing truth as a construct co-created by society and individual perception. I mean, heck, where did that get us? It got us Kellyanne Conway, Sean Spicer, and their veridically challenged boss, that’s where.

I encounter the conundrum of what truth is almost every time I get an “Ask a Jew” question. “What’s the Jewish view on XYZ?” people ask. I often preface my responses with the same old saw: It’s “Ask a Jew,” not “Ask a Jew Who Represents Millions of Other Jews in Addition to Himself.” Orthodox or otherwise traditional Jews may tell you there’s a single, official Jewish stance on hot-button issues like premarital sex and abortion. But there is, to say the least, a critical mass of Jews— Reconstructionists, Reform Jews, many Conservatives — who might deny that there are absolute Jewish truths regarding such matters.

Rabbi Reuven Firestone, a professor at Hebrew Union College-Jewish Institute of Religion in Los Angeles, has this to say on the subject of truth:

Our tradition does not expect us to find the answers to the riddle of Truth, but it does expect us to grapple with the questions. In Jewish tradition, the unity and oneness of God does not require a unity of opinion and belief. In fact, it teaches the opposite. Judaism stresses engagement in a process of struggling to understand, a process that ideally includes engaging in the quest with others. It will never provide “the” answer, but the very process of seeking and trying out answers, according to both Torah and Talmud, is in itself a spiritual act.

What good is a faith tradition if it doesn’t provide you with undeniable, eternal truths? In my experience, discussion, debate, and dialogue — the three Ds, I guess — are central to the Jewish way of understanding the world. A recent “Ask a Jew” reader inquired: “Do you think ritual circumcision should be practiced today?” That’s more like it: a question that doesn’t ask if Jews, in general, think this, that, or the other thing. There’s a reason FāVS has two “Ask a Jew” writers with different backgrounds and perspectives.

As I made clear in my response to the circumcision question, I don’t believe it’s for me to say what other Jews should do with their male babies. I think it’s for my wife and me to say what we should do. The truth, when it comes to issues like circumcision, can be elusive. Although the internet appears to have democratized the search for truth, it’s also muddied the waters. Information wants to be free, but it also wants to be organized in such a way that it’s comprehensible and able to be fact-checked.

My wife recently advised me not to Google a particular issue related to infant health because she didn’t expect the internet to provide her with anything she could trust enough to act on. In a way, that was a relief. Here we have this massive, ever-growing information processor available to us all at the tap of a screen. Yet it’s not necessarily where the truth lies.

“The Nature of Truth” is the topic of the April 1 SpokaneFāVS Coffee Talk, which will take place at 10 a.m. at Liberty Park United Methodist Church, 1426 E. 11th Ave. All are invited to participate in this community discussion. Schindler is a panelist.