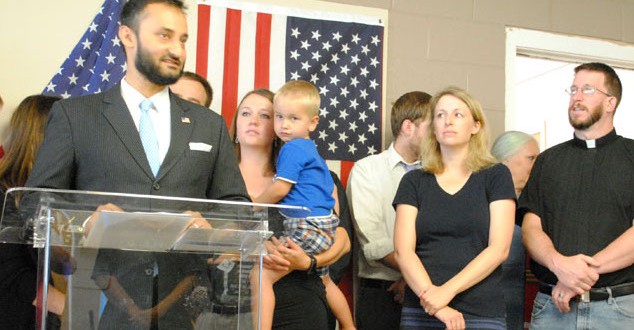 By Tracy Simmons
View Map of Anti-Islam incidents in Washington

On July 4, while Admir Rasic was inside the Bosnia and Herzegovina Heritage Association of Spokane saying Ramadan prayers for America, someone was outside spray painting “Death to Islam” on the center’s east-facing wall.

Rasic was the first to see it.

“At first I couldn’t believe what I actually saw,” he said. “It’s like that moment when people are in a car crash and they want to put their car back in drive and go on, and then realize they can’t go anywhere. I felt like I wanted to get in my car and go home, but I was rooted to the spot.”

He shared the account to a group of local media and concerned community members Thursday morning, with local faith leaders and representatives of The Council on American–Islamic Relations-Washington (CAIR) standing with him to show support.

The Bosnia and Herzegovina Heritage Association of Spokane, 2110 E. Broadway Ave., known as the Bosnian Heritage Club, is a place where the hundreds of Bosnian-American families in Spokane gather for social events and to celebrate American and Bosnian holidays. During Ramadan, which ends July 17, the space is used for prayer.

Arsalan Bukhari, executive director of CAIR-WA, is asking the FBI to investigate the incident.

“Words have real consequences. When hate speech and conspiracy theories against an American minority are constantly spread and go unchallenged they can foster an atmosphere that causes hate crimes,” he said.

Bukhari added that there’s been an uptick in reported anti-Islam hate crimes across the country — at least one a day. In February in Spokane, while waiting for her child at a school bus stop, a man threatened to rape a Muslim woman and pulled her head scarf off, Bukhari said. He also said that security has increased at WSU-Spokane after someone made a threatening phone call, angry that the school hired a Muslim-American.

“Elected leaders must speak out clearly and forcefully against anti-Muslim hate promotion,” he said. “They must respond by publicly reinforcing American values of inclusiveness and religious freedom and distance themselves from those who promote division, hate and intolerance.”

Blaine Stum, chair of the Spokane Human Rights Commission, cited a Department of Justice study that states as many as 27 times more hate crimes occur than are reported.

“What we see here is just a tiny sliver of what happens to people in marginalized communities everyday and we need to be able to come back and say we will not tolerate this and that we will work for a greater understanding of everyone,” he said.

Stum noted that the graffiti at the Bosnian Heritage Club falls on the heels of recently reported hate mail sent to the Spokane NAACP and vandalism to Temple Beth Shalom synagogue in October.

The Rev. Deb Conklin, Methodist minister and leader of The Oak Tree, said such acts are often falsely done in the name of Christianity.

“Those of us who follow the Gospel and really understand the teachings of Jesus of Nazareth need to speak out adamantly and often to say these people (the perpetrators) are not practicing Christians, they are not following the teachings of our faith,” she said.

Bishop Martin Wells, of the Evangelical Lutheran Church of America Eastern Washington-Idaho Synod, said Spokane has a history of being a difficult place for those “who are different to exist and have a life” and said his hope is that the children of the Bosnian Heritage Club, as well as the Spokane Islamic Center, can grow up here and not be fearful because of their skin color or religion.

He called on Spokane to support these communities.

Ayesha Malik, a practicing Muslim and member of the Spokane Interfaith Council, hopes whoever vandalized the building will be willing to sit down with her and learn about Islam.

“If the perpetrator is found we’ll open our arms and embrace them and welcome into this space so we can break down and misconceptions about Muslims,” she said.

Rasic added that anyone from the Spokane community is welcome to join them in prayers during the rest of Ramadan. Prayers are nightly beginning at 8:30 p.m.