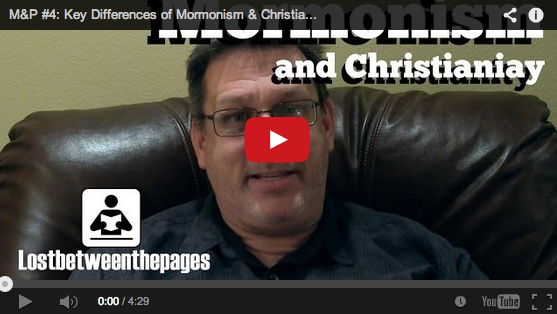 First, a note from Associate Pastor Curt McFarland of Moses Lake Presbyterian Church, who is featured in this week’s video:

As a preface to this video, which some will see as controversial, I believe what is needed in faith conversations and general community discourse is not silence on the things one holds closest to the heart but instead the willingness to listen to each other, to respect each other, to soften the tone and increase the dialogue. This particular video reflects my understanding of the key differences between historic orthodox Christian faith and LDS faith. My understanding of the differences is a result of conversations with leaders within the LDS community and my own research using LDS produced material. I do not mean to disrespect those within the LDS faith, instead I mean to highlight points for further discussion. A significant majority of historic orthodox Christian leaders believe there is a clear distinction between their core beliefs and those of the LDS faith. Friendship and conversation across faith lines is not only possible, but desired.

Rosemary McFarland grew up in the mountains at a Christian summer camp before moving to the country.

Previous BRIEF: Whitworth Institute of Ministry to host presidents from Princeton, Fuller seminaries
Next ‘Not one more’: At Seattle Pacific University or anywhere else