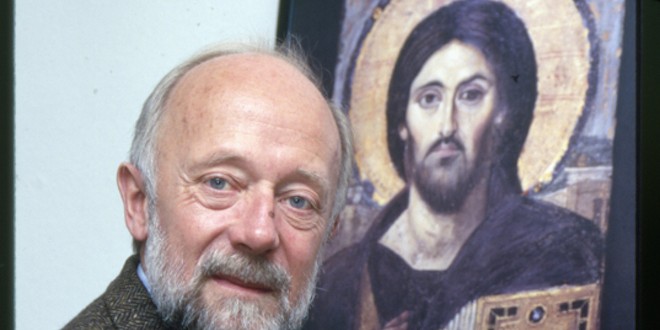 Marcus J. Borg, a prominent liberal theologian and Bible scholar who for a generation helped popularize the intense debates about the historical Jesus and the veracity and meaning of the New Testament, died on Wednesday (Jan. 21). He was 72 and had been suffering from a prolonged illness, friends said. Photo courtesy of Oregon State University

(RNS) Marcus J. Borg, a prominent liberal theologian and Bible scholar who for a generation helped popularize the intense debates about the historical Jesus and the veracity and meaning of the New Testament, died on Wednesday (Jan. 21). He was 72 and had been suffering from pulmonary fibrosis.

Borg emerged in the 1980s just as academics and theologians were bringing new energy to the so-called “quest for the historical Jesus,” the centuries-old effort to disentangle fact from myth in the Gospels.

Alongside scholars such as John Dominic Crossan, Borg was a leader in the Jesus Seminar, which brought a skeptical eye to the Scriptures and in particular to supernatural claims about Jesus’ miracles and his resurrection from the dead.

Like other scholars, Borg tended to view Jesus as a Jewish prophet and teacher who was a product of the religious ferment of first-century Judaism.

But while Borg questioned the Bible, he never lost his passion for the spiritual life or his faith in God as “real and a mystery,” as he put it in his 2014 memoir, “Convictions: How I Learned What Matters Most,” the last of more than 20 books he wrote.

“Imagine that Christianity is about loving God. Imagine that it’s not about the self and its concerns, about ‘what’s in it for me,’ whether that be a blessed afterlife or prosperity in this life,” Borg wrote.

Borg was the youngest of four children, born March 11, 1942 in Minnesota and raised in a traditional Lutheran family. He attended Concordia College in Minnesota where he majored in philosophy and political science.

He remained fascinated by the New Testament, however, and accepted a fellowship to do graduate work at Union Theological Seminary in New York City, where he delved deeply into the Jewish background of the Gospels and Jesus of Nazareth and studied with some of the major theologians teaching there. Borg then went on to further studies at Oxford and taught at various Midwest universities on his return to the U.S.

In 1979 he joined the faculty at Oregon State University and taught religion there until his retirement in 2007.

Borg’s 1987 book, “Jesus: A New Vision,” launched him to prominence. The book summarized and explained recent New Testament scholarship for a popular audience while presenting Jesus as a social and political prophet of his time who was driven by his relationship with God. Borg viewed this relationship as more important than traditional Christian beliefs based on a literal reading of the Bible.

In subsequent books, three of them co-written with Crossan, Borg continued to press and expand on those ideas, becoming a hero to Christian progressives and a target for conservatives.

Borg loved to debate but was no polemicist, and over the years maintained strong friendships with those who disagreed with him, developing a reputation as a gracious and generous scholar in a field and a profession that are not always known for those qualities.

For example, Borg co-authored a 1999 book, “The Meaning of Jesus: Two Visions,” with N.T. Wright, an Anglican biblical scholar who took a more orthodox view of the Gospels. But Wright also recommended many of Borg’s books and lectured alongside him on occasion.

“Spanning the study of Jesus and a wide variety of subjects, Marcus shaped the conversation about Jesus, the church, and Scripture in powerful ways over the space of four decades,” Frederick W. Schmidt, Jr., of Garrett-Evangelical Theological Seminary, wrote on his blog on hearing of Borg’s passing.

“I came to different conclusions about a number of issues, but Marc was always incisive, tenacious, thoughtful, and unfailingly gracious; and over the years he became a cherished friend,” Schmidt wrote.

The Rev. Barkley Thompson, an Episcopal priest and rector of Christ Church Cathedral in Houston, broke the news of Borg’s death in a blog post in which he spoke of how much he had learned from Borg and how close they remained even as Thompson’s beliefs became more traditional and veered away from Borg’s.

“I once introduced Marcus to a church audience by saying, ‘I agree with roughly 75 percent of what Marcus will say to you this evening,’” Thompson wrote in his tribute. “When he stepped into the pulpit, Marcus quipped, ‘I’m tempted to forgo my notes and discuss with Barkley the other 25 percent!’”

During a question-and-answer period with parishioners at one event, someone asked Borg, “But how do you know that you’re right?”

Borg paused and responded: “I don’t know. I don’t know that I’m right.”

Thompson said he had corresponded with Borg in late November and asked how he was doing.

“I may have ten years left,” Borg wrote back. “Not sure I want more. There comes a time to let go. And I could, with gratitude, sooner than that. My life has been very blessed.”

While raised a Lutheran, Borg gravitated to the Episcopal Church, which was his home for much of his life. His wife, Marianne, is an Episcopal priest and former canon at Trinity Episcopal Cathedral in Portland, Ore., where Borg frequently lectured and was given the title of canon theologian.

With characteristic humor he said his wife informed him that “canon” means “big shot.”

A virtual fundraiser will be held this week to raise money for Salish School of Spokane and increase awareness of its mission.