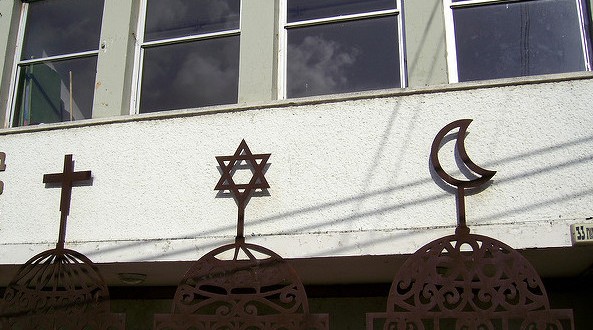 Lose It, Find It, Celebrate, and Eat

“Think of Jesus as the early Jon Stewart on the Daily Show,” said Amy-Jill Levine to a crowd of 500 or so people at Gonzaga University last week. Parables are meant to be edgy, provocative, and to make the reader uncomfortable. The professor of New Testament and Jewish Studies at Vanderbilt Divinity School and College of Arts and Sciences in “Of Pearls and Prodigals: Hearing Jesus’ Parables Through Jewish Ears,”  encouraged us to think of how the parables make us feel and by situating Jesus’ parables in the context of the Jews listening to him.

The word parable comes from the Greek word to cast two things side by side, said Levine starting her explanation with a line from Robert Burns, “My love is like a red, red rose.” What did Robert Burns mean? Did he mean that his love is better by the dozen or his love will wilt in a few days and he will soon be on to another? Probably not. The people hearing him at the time and today likely understand that a red rose is a symbol of deep love and romanticism.

In her Gonzaga presentation, Levine focused on the parable of the prodigal son from Luke 15:11-32. Luke sets it up as a parable about repentance and forgiveness but Levine looks at it in the context of the people hearing it. They would not have situated it in a repentance and forgiveness context, said Levine. Parables are often found in groups of three. The first two set up the context of the third. The parable of the prodigal son is set up by the parable of the lost sheep and the lost coin. Each of these three parable lays out a trajectory … something precious is lost, when it is found, celebrate and eat.

The parable starts with, “There was a man who had two sons.” This is setting up the importance of the number of sons, said Levine noting that the people listening would have known how when there are two sons, the older son doesn’t usually fair as well as the younger son: Cain and Abel, Ishmael and Isaac, Esau and Jacob, and Ephraim and Menasha. King David was also the younger son.

“The younger one said to his father, ‘Father, give me my share of the estate.’ So he divided his property between them.”

The story continues in a way that people at the time would have thought of as normal. The younger son, even while the father is alive, would take his inheritance, travel, work, and make a life for himself. But this young man is financially irresponsible, then “came to his senses” and decides to go home. Levine notes that the text says he came to his senses, not that he repented. To the people of the first century it would have sounded like pharaoh who was not repentant, but just wanted the plagues to stop.

Then there is the killing of the fatted calf, a feast, and an exaggerated welcome.

“Meanwhile, the older son was in the field. When he came near the house, he heard music and dancing.  So he called one of the servants and asked him what was going on. ‘Your brother has come,’ he replied, ‘and your father has killed the fattened calf because he has him back safe and sound.’ The older brother became angry and refused to go in.”

Here is the older brother, a young man who is upset, maybe a little passive aggressive, and using distancing language when speaking of his brother, “But when this son of yours…” The father tries to close the familial distance by describing the younger son in “this brother of yours” language.

In the parable of the prodigal son, most people focus on the prodigal (younger) son and his actions and intentions. Focusing instead on the older son, the one who stayed and worked the land, Levine draws new lessons from this parable: “Parental love is not a zero sum game.” There is enough love for each child. When we see damaged families we should look and see who have we discounted or taken for granted. Who have we written out of the story of our families? Who have we deprived our attention? Food is also an important lubricant of communication. “If you can’t stand someone in your family, go have lunch with them,” said Levine, noting that in this parable the son gets food and forgiveness before any repentance seems to happen.

Levine notes that at the end of the parable there is no closure, no final words as to what we should do or what we should learn. We each have to figure out what it does to us, how it changes us and how we feel at the end. It is okay to discuss it over food, even argue.

Meet over food, talk, and celebrate.