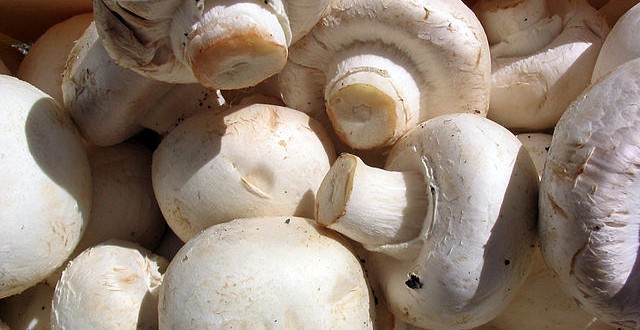 White mushrooms ready for cooking. While common, they are just one of the many types of mushrooms cultivated and eaten/Flickr photo by Darkone

Let’s say you wanted to turn your restaurant, grocery store, or kitchen into a popular Kosher Asian Bistro, what would you have to do? What do you know about the people you would serve?

Or maybe you just want to learn about kosher food because one of the students in your first grade Montessori class keeps kosher and you want to be knowledgeable in helping him? Should you treat him like he has an allergy to certain foods or talk to the other kids about how some religions have specific dietary codes?

Maybe you work at Trader Joe’s and you know your store carries kosher meat. Customers thank you for carrying Kosher meat as you cash them out and you want to know why someone would buy kosher meat.

Perhaps you have Jewish friends who keep kosher and you want to invite them to your house for dinner. What do you have to do and what questions should you ask?

You might just want to get a great vegan “oyster sauce” recipe.

Maybe you are wondering how to reach customers and grow your business with people interested in kosher food, vegetarians, and people who are gluten-free, or get headaches from Monosodium Glutamate and so are MSG-free?

If you have ever wondered about any of these things, this eight part series at SpokaneFāVS is for you.

The first step is eliminating ingredients that are never kosher and figuring out what ingredients could be kosher.  Consider what is on your menu that is clearly not kosher.

Shellfish, including oyster sauce and pork are common ingredients in Asian food. These ingredients are never kosher and cannot be made kosher. Alternatives need to be found for this first step of only using ingredients that could be kosher. The food would still not be considered officially kosher but some Jews will eat food that doesn’t contain shellfish or pork. Be aware that many fish sauces contain shellfish (shrimp, lobster, clams, and oysters). None of these can ever be kosher.

Pork or anything that comes from a pig is not kosher under any circumstances. There are many Jews in the United States who don’t keep kosher but will still not eat anything with pork. It is, in a way, the lowest common denominator. If you are Jewish and you follow any of the kosher rules or Kashrut, then you likely don’t eat pork. Note that some beef or lamb sausages come in a pork casing and so would not be suitable for many Jews.

As we will see there are several steps before being able to truly label meals — kosher, but vegan foods, which naturally contains no shellfish, pork, meat, or dairy are a good way to start. Some Jews who keep strictly kosher at home will eat vegan or vegetarian food that has been prepared in a place without a kosher kitchen. Vegetables, eggs and fish that are kosher are called “Parve” and are neither meat nor dairy. Restaurants in Israel are often serve one and only one of these three types of food: Vegetarian, Meat, or Dairy. More details next week.

Once you know which menu items do not have completely non-kosher foods in them, start by labeling the menu items: “Contains no shellfish or pork ingredients”. You will be educating your customer and letting them know that you are also knowledgeable about foods that some people stay away from.

Where Do The Laws Come From?

“Of the things that are in the waters, you may eat anything that has fins and scales,” Lev. 11:9; Deut. 14:9. “Thus, shellfish such as lobsters, oysters, shrimp, clams and crabs are all forbidden. Fish like tuna, carp, salmon and herring are all permitted.”

The Taste of Umami

According to National Public Radio, umami is the fifth taste along with sweet, sour, salty, and bitter.

“Glutamate is found in most living things, but when they die, when organic matter breaks down, the glutamate molecule breaks apart. This can happen on a stove when you cook meat, over time when you age a parmesan cheese, by fermentation as in soy sauce or under the sun as a tomato ripens. When glutamate becomes L-glutamate, that’s when things get “delicious,” L-glutamate, said Kikunae Ikeda, is a fifth taste.

Slow cooking oysters to a deep brown sauce also gives you an umami flavor. Monosodium Glutimate (MSG) is pretty much pure umami, which means delicious or yummy in Japanese. The Japanese have a brand that is called “Aji no Moto” or source of flavor that is basically MSG in a shaker. Some people use it like salt on food. Of course, using MSG is also a way to get headaches for some people. Glutamate is a natural neurotransmitter and affects signal transmission in the brain.

Mushrooms provide an umami flavor similar to shellfish, including oysters. You can get a taste like oyster sauce by doing the following:

Stir fry six medium onions that have been diced and caramelize in olive oil or toasted sesame oil.

Add one chopped clove of garlic; one teaspoon of fresh chopped ginger; and four cups of shitake mushrooms. You can use the dried shiitake mushrooms from an Asian market (soak in cold water for at least 30 minutes before using) or fresh. Continue to simmer for 5-10 minutes until the mixture is soft and caramelized to a dark brown mash. Let it cool.

Blend the onion, garlic, ginger, and mushroom mixture until smooth with 1 cup of water. You can use the mushroom soaking water and add three tablespoons of gluten-free tamari or soy sauce.

Optional: add a sweetener like a teaspoon of maple syrup, honey, or brown sugar. Some people add anchovies to get a stronger umami taste but, of course, then it would not be vegan.

Use with stir fried vegetables, noodle soup, or fish. You can add salt and pepper to taste to the sauce in the cooking process or to the meal when you use the sauce.

The sauce can be frozen in jars and used as needed or frozen in an ice cube tray and used one cube at a time. You will want to have a dedicated ice cube tray otherwise your ice will taste like oyster sauce.

Step Two—As you can see step one is to remove anything that can never be kosher. Step two is using only ingredients that are naturally considered kosher. More next week in: Creating Delicious Parve or Naturally Kosher Ingredient Filled Dishes.