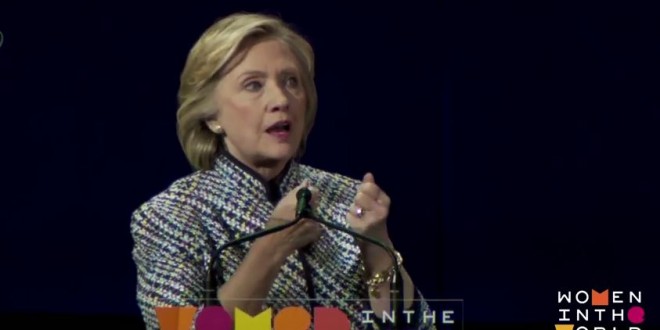 Hillary Clinton: Americans must change religious beliefs to suit me

While speaking at the 2015 Women in the World Summit held in the David H. Koch Theater at Lincoln Center, former Secretary of State and 2016 Democratic Party presidential candidate Hillary Clinton made a shocking statement that has a number of people from both sides of the political aisle concerned.

“Far too many women are denied access to reproductive health care and safe childbirth, and laws don’t count for much if they’re not enforced. Rights have to exist in practice — not just on paper,” she said. “Laws have to be backed up with resources and political will…And deep-seated cultural codes, religious beliefs and structural biases have to be changed.”

Translation: Americans must change their religious beliefs to suit her.

Her comment sparked a flurry of criticism. Writing at The Blaze, Susan Calloway Knowles, a licensed psychotherapist and former practicing family law attorney, said Clinton was clearly taking aim at Christians in America who do not agree with her views on abortion.

“It was perhaps Clinton’s attempt to hammer the final nail into America’s proverbial coffin by lessening Christians’ religious, cultural, and familial beliefs,” she wrote. “If achieved, the result will be that God, the Bible and the U.S. Constitution which was founded upon Christian principles, will take a back seat to other progressive agendas, at least in a Clinton presidency. “

Kirsten Powers, a left-of-center columnist who sometimes appears on Fox News, also took Clinton to the woodshed in a recent USA Today op-ed entitled: “Saint Hillary seeks to save Christians from Christianity.”

“If Clinton is going to complain about cultural codes, perhaps she should dispense with the ‘reproductive health care’ euphemism and just say ‘abortion’ and ‘contraception,’” she said. “Then she should explain why she thinks she, or anyone else, has the right to dictate what religious people believe about either issue.”

Powers hit the nail square on the head. Aside from displaying a stunning bit of hubris, Clinton revealed her true desire – to dictate every aspect of the lives of average Americans, including their religious beliefs.

Powers, however, wasn’t finished. She added:

The intolerance, condescension and ignorance expressed about religious people is troubling enough in itself. But what sends chills up the spine is the barely veiled advocacy for authoritarianism when religious beliefs clash with secular sacred cows. After all, what entity will make religious leaders “take homosexuality off the sin list”? How exactly will Clinton change religious beliefs at odds with her worldview?

While speaking at the New Jersey chapter of the American Camp Association in March, Clinton said America needs to set up camps that adults can attend – just for fun. But many saw something darker and more sinister in her statement.

At the time, the Daily Caller noted that the word “joycamp” was the Newspeak term for forced labor camps in George Orwell’s “1984.”

“You’ll forgive us if we don’t take a shower,” one Daily Caller reader sarcastically said. “Those who voted for the current Inspiring Leader will rush to the head of the line. A little later, the skeptical among them will be dragged to the fun family facility,” another person said.

Clinton was also hammered on Twitter, with many taking umbrage at her suggestion that Americans must bend their beliefs for her.

“If Hillary Clinton thinks we need to change our religious beliefs, Christians need to wake up,” one person tweeted. “Stand up! Stop being silent! Jesus is Lord!”

Many others weighed in:

Move over God, Hillary is coming to change our beliefs Hillary Clinton has given us a look at some of the… http://t.co/VRjJbVEyDa

Hillary Clinton and the radical Left believe that protecting abortion is even more important than your religious… http://t.co/euhcTj9D8x

It would seem that Clinton has been out of law school so long she has forgotten some of the basics. One of those basic principles is the concept that all Americans have the First Amendment right to freedom of religion.

That means everyone has the right to express and hold whatever religious beliefs they choose. If someone, for example, wants to worship a bologna sandwich as a god, he or she is free to do so. And no one – not even Hillary Clinton – has the right to demand otherwise. It’s called “freedom.” Maybe she should Google it if she doesn’t have the time to attend a remedial class on the Bill of Rights.

Or better yet, perhaps she should focus on her own issues, some of which go back over 40 years.