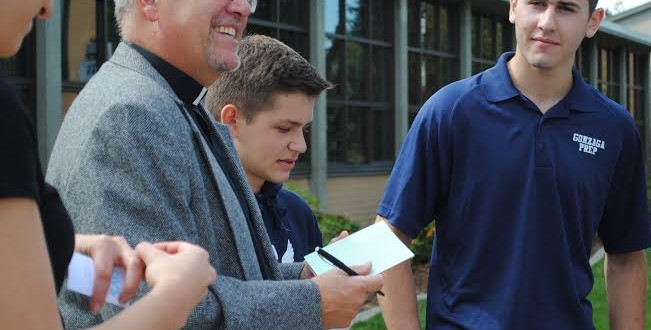 Rev. Tom Lankenau goes over a travel itinerary with Gonzaga Prep students who will be traveling with him to Philadelphia to see Pope Francis./Tracy Simmons - SpokaneFāVS

About 1 million people are expected to descend upon Philadelphia for this weekend’s papal visit. Among them are five Spokane high schoolers.

Three sophomores, a junior, and a senior from Gonzaga Preparatory School will join students from more than 40 other Jesuit high schools across the U.S., Canada, and Puerto Rico for, “2 Philly 4 Francis: Ignatian Pilgrims on the Journey,” a student pilgrimage celebrating Catholic identity and Pope Francis’ historic visit.

“What I’m most excited about is seeing the larger Catholic community gathered together,” said senior Emily Bahr.

But, she’s also eager to see the pope.

“I think Pope Francis is so popular and well known right now because he is so loving and accepting. He just wants people to know they’re loved regardless of their background,” she said.

She and her peers will sleep on the floor at St. Joseph’s Preparatory School in Philadelphia and they have tickets to hear the pope speak Saturday night and will attend his Mass on Sunday morning, said The Rev. Tom Lankenau who teaches theology at Gonzaga Prep and will be traveling with the students.

Lankenau said Pope Francis has struck a chord with Catholics of all ages, noting it’s especially encouraging to see youth so interested in the pontiff.

“He’s like a religious superstar,” he said. “We’ve seen him with a clown nose, doing selfies, being so compassionate, hugging a man with a skin condition, hugging babies. We’ve seen the picture of him washing the feet of prisoners. All these gestures say something about the type of person he is and the person he wants us to be.”

Luke Winkler, a junior, said it is things like this that make Pope Francis appealing to his generation. The pope, he said, deals with practical issues rather than hierarchical ones.

Sophomore Natalie Schwartzenberger said Pope Francis has taught her to find God in all circumstances.

“It seems like there are a lot of bad things, but he shows us how to use those things and turn them into good,” she said. “I’ve specifically learned that every person has kindness deep in them no matter what they’ve done.”

She said she hopes the non-Catholic fan base the pope has attracted can see that, too.

Michelle Wheatley, Gonzaga’s director of University Ministry, can understand why.

“When we see someone, regardless of our own background and our own story, living out their faith, living out their path with conviction, authenticity, and integrity, that’s inspiring,” she said. “I think his message is one that transcends certain boundaries and lines. It’s an invitation to take better care of our brothers and sisters and the human family, and take better care of our home, the earth; and I think a lot of people agree with that and respond to that.”

Although a student delegation from Gonzaga isn’t traveling to the East Coast to see the pope, Wheatley said there is still a “Pope Francis buzz” on campus and students are eager to see what he says on U.S. soil.

The Rev. James Voiss, rector of Gonzaga’s Jesuit community, said he hopes Pope Francis will continue to speak the message he’s already been proclaiming — that people of Christ must show special concern for the most vulnerable.

That, Voiss said, is what lies at the moral center of humanity.

Pope Francis arrived in the U.S. on Tuesday and will return to Rome Sunday night.

SpokaneFāVS will be traveling to Philadelphia to cover the Papal visit. Check out this page for full coverage.
[wp_paypal_payment]

Previous Your God is Shallow
Next Jesus is about the whole world, not just you