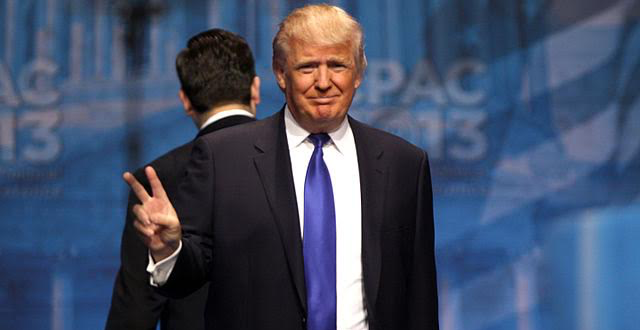 Delay started by explaining that the “ideal” candidate for the highest office in the land is someone “with God at the core of his or her life and the Constitution at the center of their philosophy of government.”

That person, he added, is probably not media mogul Donald Trump.

“Many conservatives, even some evangelical Christians, may not get it,” he wrote. “That includes those at Liberty University on Jan. 18 who rocked the arena with applause as Trump spoke tweets and seven second soundbites that garbled true conservative principles and perhaps even Christianity.”

He cited 1 Timothy 3:6, which advises that church leaders should not be novices, “lest being puffed up with pride he fall into the same condemnation as the devil.”

Delay admitted the passage deals with church leadership but said the principle is “a good one for leadership at large.”

Trump came happily to work his shtick on the “nice religious people” — as he put it — packing the Liberty University arena. Sadly, Trump gave an incoherent speech consisting mostly of lines that pandered to his audience.

The performance was insulting to Christians everywhere. I wonder if the majority of the Liberty audience grasped that fact?

When it comes to speaking the language of evangelical Christianity, Trump is like a first-semester foreign language student who tries to sound like he’s spoken the new lingo all his life. Native-speakers understand right away that such a person is a beginner, and try not to laugh in his or her face.

While speaking at the school, Trump referred to the New Testament book of 2 Corinthians as “Two Corinthians” instead of “Second Corinthians,” prompting Family Research Council’s Tony Perkins to comment that Trump is clearly not familiar with the Bible, despite the candidate’s earlier statement that it is his favorite book – even though he couldn’t name a favorite verse.

Later, Trump blamed Perkins for the gaffe, saying the evangelical leader wrote it out for him.

“Tony Perkins wrote that out for me. He actually wrote out the 2, he wrote out the number 2 Corinthians,” Trump said during an appearance on CNN.  “I took exactly what Tony said, and I said, ‘Well, Tony has to know better than anybody.’ ”

The gaffe also prompted a great deal of discussion and sarcasm on Twitter:

So Donald Trump and two Corinthians walk into a bar…

"It was the best of Trump, it was the worst of Trump." – Opening of "A Tale of Two Corinthians"

Trump cites two Corinthians, says he made a solid real estate deal with both of them.

So.. Two Corinthians walk into a bar… #trump #LibertyUniversity

DeLay said he hopes Trump is “a truly born-again, regenerate follower of Christ. However, the electorate — especially evangelicals — must decide if Trump is a preacher who has just found his political voice or a politician trying to sound like a preacher.”

Those flocking to Trump, he added, are, “like people with their eyes wide open but who see nothing.”  Trump routinely says he will “do this” or “do that” but, DeLay observed, his followers do not appear to understand those promises mean the enlargement of government – something totally at odds with conservative ideals.

“The Roosevelt-Obama style of presidency eats the Constitution for breakfast, devours the Congress for lunch, and dines in the evening on the Judiciary. Energized, this Godzilla mauls Washington, smashing the walls that separate the Oval Office from the rest of government until the presidency is the whole, and the rest nothing more than an aggravating case of indigestion,” he wrote.

America, he said, needs a president with God in his or her heart and the Constitution in his or her head.  But right now, he concluded, there’s far too much unsaid about Trump to make him that candidate.

Previous Retreat to focus on “Christ’s mysteries in our lives”
Next Ask A Mormon: Why Salt Lake?

Great radio endorsement ad featuring Jerry Falwell jr endorsing donald Trump is now playing in SC. I am voting Trump and the find articles like this one to be absurd.