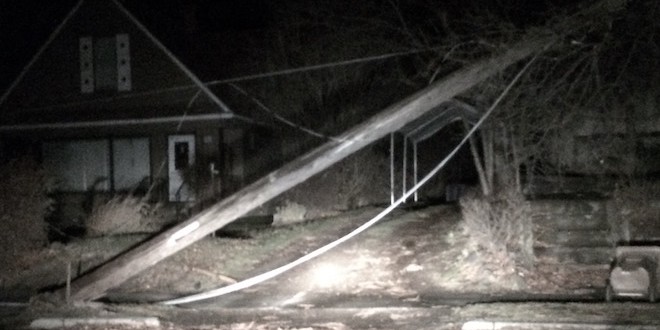 Read part one of this series and part two.

Emergency preparedness demands that one consider mitigation of risk – it’s not prevention but the identification of means to reduce the occurrence or impact of the results of an emergency.

It seems like a simple idea but it’s the execution of mitigation that is the real problem.  Because it’s easy to think of ways to minimize the impact of an emergency.  But implementing is usually prevented because it’s too costly.

Let me give an example from my own back yard – literally, my back yard.

The picture accompanying this post is of the power lines coming into my home.  They stretch from a pole at the back of the property to my house.  The lines pass through two trees.  While they weren’t disturbed during the 2015 wind storm, if there’s a repeat of the ice storm of the 90’s, it’s likely the lines would come down due to branches laden with ice falling upon them.  Of course, if the lines come down, there’s no power to my house – assuming that there’s still power to the pole – a big if.

I previously lived for many years in Fairfax County, Virginia.  When the subdivision was built all utilities where buried – there were no overhead lines.  The possibility of an ice or wind storm knocking down lines was nonexistent – the risk was mitigated.  The cost of installing the utilities underground was included in the initial construction costs and there was ample capacity to install new utilities, i.e., cable television lines.

So burying our power lines would be a good thing for our house.  But the cost?  When I initially considered the issue I discovered that:

So I was looking at have to spend close to $10,000 just to mitigate the possibility of my power lines coming down in a storm.

On the other hand, if I didn’t bury my power lines:

How do you decide what to do?  You have to consider the factors of likelihood of occurrence and other potential benefits besides the cost.  For example, the ice storm was in 1996 – 20 years ago.  In the 11 years we have lived in our house, the longest the power was out being one day and we lost nothing from our freezers and refrigerators in that incident.

For me, the decision was easy. We left the power lines the way they were.  Now we have taken steps to remove branches that were candidates for breaking and falling on the power lines and we’ve consulted with arborists about thinning the trees.  All reasonable, and relatively low cost.

So now you have an example of mitigation and what the decision process is for deciding what to do.