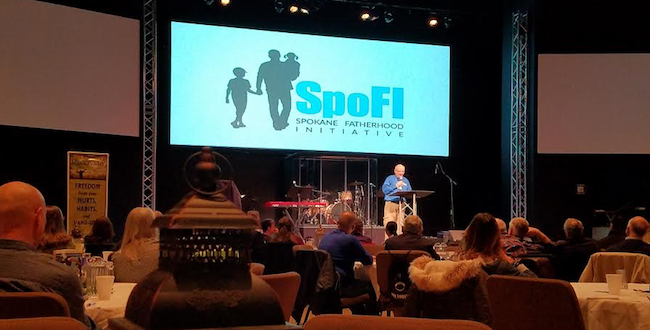 Faith groups come together to address fatherlessness in Spokane

On Jan. 20 vendors packed the edges of Valley Real Life Church as attendees entered for this year’s Spokane Fatherhood Conference. Vendors like Shine 104.9, Union Gospel Mission, Embrace Washington, Family Promise of Spokane, and many others were there to engage and network with area faith leaders as part of the effort of the Spokane Fatherhood Initiative (SpoFi) to help fight the tide of fatherlessness in the greater Spokane area.

SpoFi is the brainchild of Ron Hauenstein, who felt called to form the initiative two years ago when a group of pastors and leaders gathered to address some of the biggest issues facing Spokane. In almost unanimous agreement, they all said fatherlessness is one of, if not the biggest issue in Spokane.

Hauenstein was the first speaker at Saturday’s conference. He told the group, “When I was growing up, it seemed like everyone had a dad. There was an unwritten rule that if you brought a child into the world, then you took care of that child. Fatherlessness is the root of many problems. As the birthplace of Father’s Day, Spokane is the perfect place for this movement to start.”

According to the CDC, the out-of-wedlock birth rate in 2015 hovered just above 40 percent. Contrast that to 1940 when just 3.8 percent of births were out of wedlock

Hauenstein believes that one of the keys to combatting the issue of fatherlessness is to mobilize the churches to come alongside the foster care system and to work in tandem.

“We are asking pastors to speak about becoming foster families. We want to flip it around so that there are more foster families than children who need foster homes. Do you have an active, vibrant men’s ministry? Are you supporting single mothers? Have you knocked on the principle’s door of the schools next to you and asked if there are any problems you can help address?” Hauenstein asked.

David Murrow, author of “Why Men Hate Going to Church,” spoke on the absence of men within most Christian churches today. He believes there is a huge gender gap in churches.

According to Murrow, the average church in North America draws an adult crowd that is 61 percent female. He also points to the fact that fewer than 30 percent of boys being raised to be active in churches today will remain faithful through their teens and twenties.

Connecting it back to the epidemic of fatherlessness, Murrow says, “There is no better way to create good fathers than to get them into a church building. A host of bad behaviors that cripple fathers fall away when they are engaged in church.”

But in order to get men back in church, Murrow claims that we need create environments that speak to men, that tailor messages to the unique challenges and differences that men have.

Murrow is concerned, because he believes that for men, everything is a competition. “If we can’t win, we don’t want to play. The problem is, men are going to church, not doing well, and then deciding it is easier to quit.”

He believes that there is a whole host of other issues that contribute to the decline of men’s attendance at church.

But regardless of the cause, the fact that church attendance for men is steadily decreasing should serve as a warning sign to faith leaders.

Ryan Brown, the Director of Youth Services for Union Gospel Mission, told the story of his own battle with fatherlessness, a gripping story of failure and redemption. Brown is working hard to address the issue of fatherlessness in Spokane. Recently, Brown helped to create the Student Impact Center to empower and train young leaders to serve and minister to the youth of the city. His own experience taught him that helping someone see value in themselves can break a vicious cycle and change the lives of generations.

He told the group, “We need to care for the kids, but we need to bring value to the dads, because we will bring hope and value, and transform their lives.”

Robin Hatten, of Spokane 127, a ministry arm of SpoFi, is working to connect churches, community members, and government entities. Spokane 127’s call to action comes from the scripture in James 1:27, “Pure Religion and undefiled before God and the Father is this, to visit the fatherless and widows in their affliction, and to keep himself unspotted from the world.”

Stamping out fatherlessness seems to be an overwhelming and almost herculean task, but Hatten assured the gathered crowd. “Everyone can do something.”

To help SpoFi or to get more information on what organizations in the community are doing to address fatherlessness and building stronger fathers, visit www.spofi.org.

This story is funded by our members. To become a member and support local religion reporting, click the button below!

Previous Ask a Jew: Why don’t Jews “play the Holocaust card”?
Next Ask A Buddhist: View of Spirits